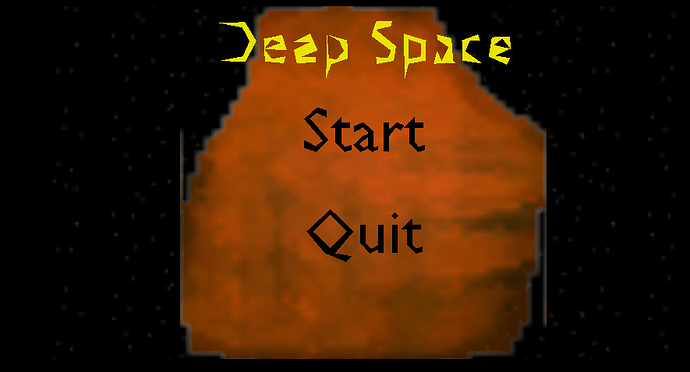 .Blend https://drive.google.com/file/d/0B7YN1w1IyXTMVE1fVGtaZGNsV2c/edit?usp=sharing
(Yes I know the game .blend is called the space race, but I changed it to Deep Space)

I hope you enjoy the game

If you miss the instructions on the side of the game here you go:

Thanks for viewing (Yet again enjoy) and please give any suggestions. I am planning on expanding this game, by keeping the concept but making it more modern.

the good:
I loved the sounds. It’s great to see a blender game with sound.
The ship looks nice. Good use of the limited polys and low texture.
The changing skydome on each level was a good touch made me feel like each was different.
Nice smooth controls, though I could have wished for yaw control as well as roll and pitch.
Nice menu screen, it’s good that you don’t go straight in to the game.

The not so good:
The asteroids look too similar, I’d have at least 10 different textures placed randomly.
I’d like the asteroids to blow up in to smaller chunks when I destroy them.
The collision bounds of the asteroids don’t match well with the visual shape. Often the only way to know if I was hitting them was to fly in to them. I’d like to see some special effect to show a bullet collision with an asteroid.

Thank you, those are all thing (other than the textures, and collision bounds, I was being lazy) are things I would do if I had some more time. With the music, the title screen I just found a cool sound on garage band and put together a couple pieces including, a garage band made percussion, In the levels what I did was I took a sound effect from the game Maelstrom and made my own variation of it, plus sorry for the metrnome I was too lazy to remake the song without the metronome.

Sorry, one last thing, that I din’t see mentioned is that the properties that allow you to beat the level are weird so sometimes you have destroy varied amounts of asteroids, But also I could attest that to the fact that you destroyed enough to let the “Satellite” through to the next level.

It was pretty fun, the camera would sometimes be a bit misleading.
Thought I was lined up with an asteroid, go to shoot, and… turns out I’m way off.

Other than that (minor complaint, really) I enjoyed the piloting, as well as pulling off stunts, and the speed boosts were a nice touch.
But what goes on when you leave the area? It seems as though you’re brought to an asteroid field. Your guns don’t work either, it was all a bit confusing.

When you leave the area you reach deep space, the goal of the game is to clear enough asteroids for the satellite that powers your weapons to reach to deep space. so you can’t skip the rest of the game and get there early (it was either that or you dying). And the camera I don’t really know how to fix that currently.