Well that’s basically what I’m making. A stealthy game with bomberman type combat. You wont have many bombs so you’ll have to avoid the enemies as much as possible.

Level generation and navigation is done. I’m going to make basic place holders as much as possible and replace if/when I get time.

EDIT:
The project is pretty much done. If I get time I may add a custom keys scene so you can change the control setup, but otherwise I’m done for now. I’d like someone to test it so I can get feedback about bugs and any gameplay problems. 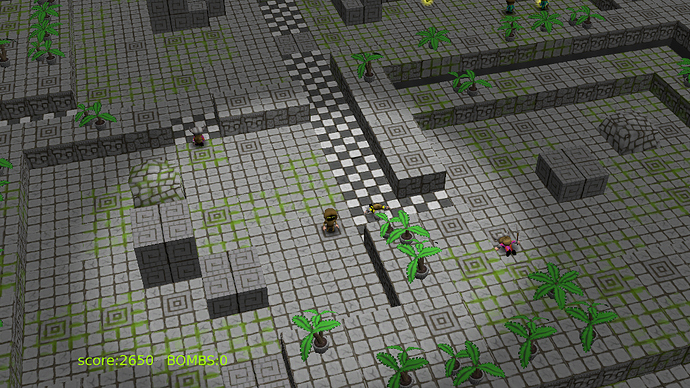 All textures hand drawn by me (with a mouse)

All sounds modified from sounds originally found at freesound.org
Thanks to Agoose77 for some help a while back on BSP trees.

Use the keypad (8,4,6,2) to move, use space to drop a bomb (after you pick one up), press space after dying to restart the game with a score of zero. Try to get a high score, pick up gold to get points, kill enemies for bonus points (50 for blue guys, 100 for pink guys and 150 for yellow guys).

Thanks everyone, and good luck in the BGMC16! I’ll post this in the finished forums once someone has tested it.

I can’t say I’ve ever played bomberman before - but I have played Robo Warrior on NES, which has the same principal.
Can’t wait to try it!

All art is just placeholder right now. The code is set up to allow me to put anything I want there once the gameplay is working: 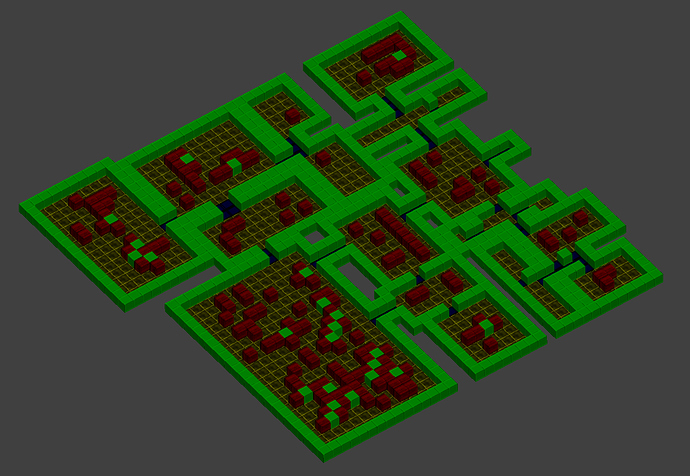 Hi! Bomberman is one of my favorite games. It seems a cool idea! I’m curious to see your random level code… Will you make an AI for monsters too? With A*? Good luck for BGMC 16!

@[email protected] ok that looks like a bomberman’s arena ya! weee suddenly so many BGMC16 threads around

@[email protected] ok that looks like a bomberman’s arena ya! weee suddenly so many BGMC16 threads around

That was what I was thinking too

Looks very nice I am looking forward to your game

Looking good! I like the idea and I can’t wait to try it.

Really rushing this one now. Don’t have much time…

And the first set of enemies is in. Level 1 bad guys just wander around aimlessly. If you walk in to them you die. Only a problem if you get boxed in I suppose… 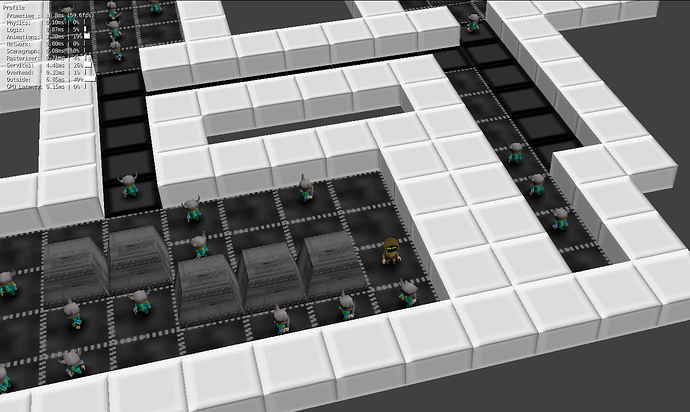 Hi! Bomberman is one of my favorite games. It seems a cool idea! I’m curious to see your random level code… Will you make an AI for monsters too? With A*? Good luck for BGMC 16!

Thanks, the level generator is a simple BSP tree with joined areas. I rewrote the code specially for the competition. I’ll post a sample in the resouces forum later since others might find it usefull.

Did a little work today. Hopefully I’ll get a bit more time before the weekend is over, but if not I’m happy with how it looks for now.
I’ll just add an enemy kills counter and submit as is.

I want to make some tile sets, add some pickups, and treasure, and set it up to run consecutively harder levels so you can try to rack up a high score. But I’m not sure if I’ll get time.

Looks realy nice, I like the walk animation. and the !!!

Love it! Can’t wait to play! Will def download when finished

Wow! great work! :yes:
And I plan on entering this BGMC. :o

Hi everyone! Please help me to test the game, it’s pretty much finished and just needs playtesting.
I may make changes based on feedback, if I get enough time.

I got 1400 and accidentaly blew up myself. Nice game!