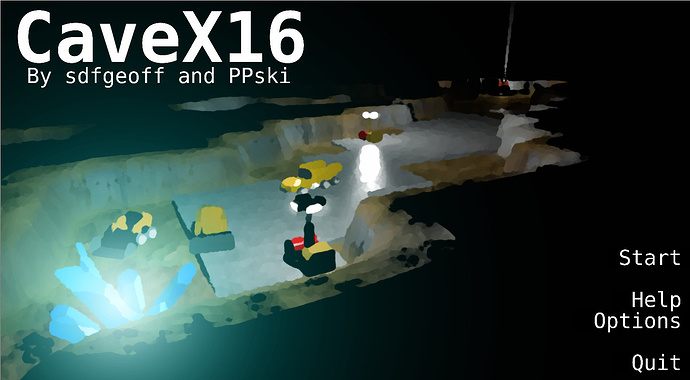 After a week of great fun, I am proud to present CaveX16. A mini RTS where you have to mine crystals. Why? Well everyone wants crystals.

Build up your mining fleet from a single vehicle to a swarm of mining machines, reap glory from the depths of a mine.

Version 1.01 has a patch on unit pathfinding to stop lag spikes if a place is unreachable. 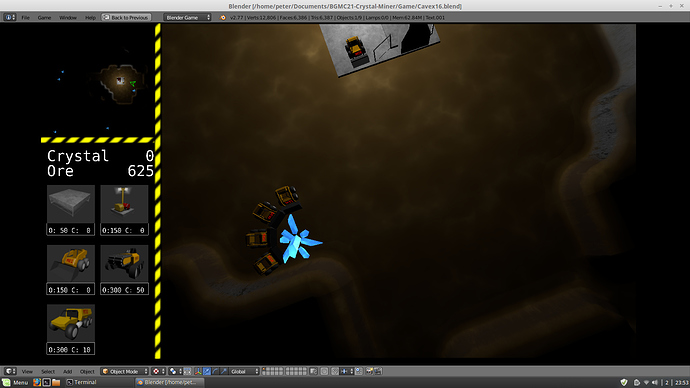 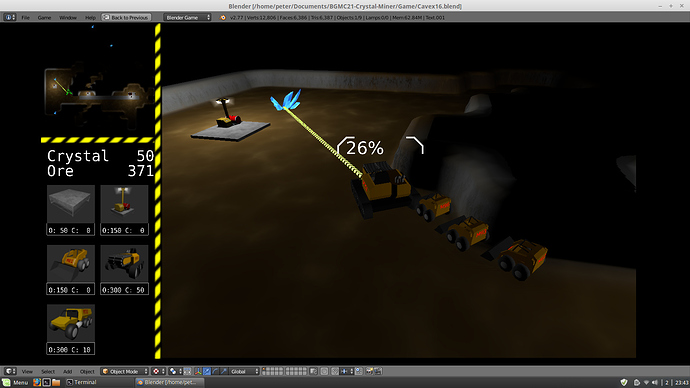 Known Issues:
See the gitlab tracker. The most serious is probably that the game will lag when sending units to impossible places on large maps. I hope to smash this tomorrow.

Thanks and licencing:
Many thanks to PPski for nailing down the concept, doodling the initial concept art, writing the pathfinding and general constructive help.
The only asset not produced by PPski and I is the font, which is used under the Bitstream license.
Everything else is licenced under GPLv3

Very nice. I felt like the only thing it was lacking was an element of conflict, like a driving force to make me do more mining. I mine ore in order to build and mine more ore…
I think if you developed the game further maybe adding rival miners would be a good idea.

I didn’t find any bugs but it can be annoying when a digger goes out of control when it is full. I want to ask it to drop off at the cargo truck but it just heads back to base.

Played it yesterday, all went well until the lag showed up

The most serious is probably that the game will lag when sending units to impossible places on large maps. I hope to smash this tomorrow.

Enjoyed the brief time I spent playing, will give it another go once it’s fixed!

@smoking_mirror:
I agree. I wish I’d thought of rival miners, though I have no idea if I’d have had time to implement it. I really like that idea, though suspect because there is no continuation between levels (no shared resources etc.), it won’t be motiviating to start a new game, but will hold people when they are playing.

Miners should pick the closest resource drop-site when depositing goods. If it goes to home base, it’s because it thinks it’s closer. However, it does not calculate the actual travel distance (as that would be very processor heavy), so it just uses line-of-flight to pick where to go.

@RandomPickle97:
You can get rid of it by finding the offending unit and targetting him somewhere else, or download the new version from the first post, where I’ve added an iteration limit. It does mean that if you have a long route, a resource truck may decide it can’t get there though. I’d love to make a faster pathfinder or make it run less often, but I no longer have the time to dedicate to blender. (I was fortunate it fell on a week with nothing else on).

I agree with smoking mirror that the only critique may can be that there is no real gameplay beside mining all the crystal as fast as possible (But hey only one week…crazy what you get together). But it is still somehow addicting … i need more crystal … just once again before i quit.

Very polished, good looking graphics. Found no bugs besides the one mentioned. Would be my favorite i think if there was not the queens worker coming in lately.

to me not work
i start the game, and appear the GUI correctly, but when click on start , go to loading, and still frozen
it give an error:

strange anyway, i tried to replace the function with a function dummy with the same name below(under the original, usually work) ,
but it continue to read the function orioginal and so the error.

also replacing the entire class with a class dummy continue to read the same things.(as if my changes was ignored completely)

im surprised on the little amount of models , (but pretty big of code)

strange the physic of “MiningMachine” , is to avoid the collisions with other units? nevermind to use a shape asimmetric

Yup, it needs a newer blender. I used 2.77a to develop it. You could try deleting the last argument of the self.tex.plot() function call, as 2.74 didn’t support different blend modes.
Even if you got it to run without errors, chances are it would make the map appear black.

strange the physic of “MiningMachine” , is to avoid the collisions with other units? nevermind to use a shape asimmetric

That was PPski’s invention. We were sitting around trying to figure out how to get oncoming vehicles to pass and he came up with the idea of asymmetric hit-boxes. It worked a treat and saved several hours of coding.

i correct the function but yes, all black ,anyway there other errors due to the version blender (PyObjectPlus can have only one argument,… not pos) well i keep it , for when i download a new version of blender.if the shape asymmetric work is a great thing , is very annoyng (and eat resurces) to solve in other ways

Reminds me of the Lego Rock Raiders game

@yousifucv:
That was a large inspiration for this game actually. Although there are very few underground mining RTS games in existance, so it makes sense that any underground mining RTS will be compared to Rock Raiders…
(For the record I’ve never played it, but PPski who helped me on this project has. I’ll have to have a go sometime.)