A non-serious game where you fly down a tunnel

Esc to bring up menu
F12 to force-quit 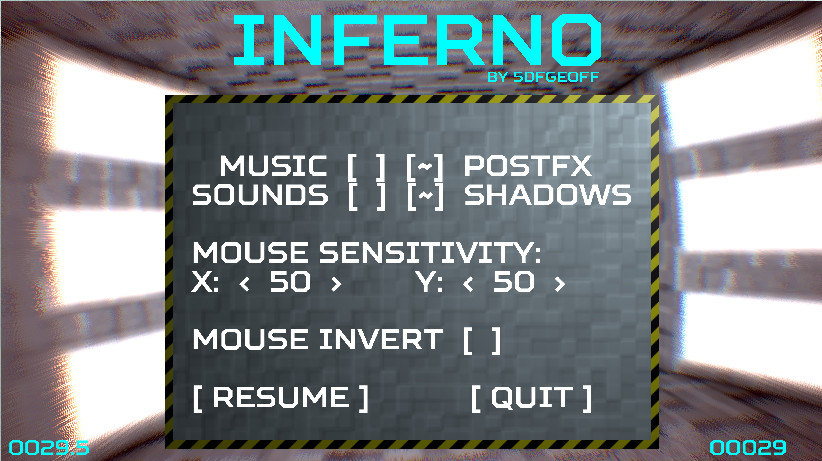 (Sound and music are enabled by default)

Let me know if you get the ‘Speed Demon’ achievement. I haven’t been able to survive long enough to get it.

Great game! I got the “speed demon” achievement and my highscore is 68220

I don´t like that the game automatically restarts after you fail, because it sometimes makes it impossible to read the highscore.
Maybe you can always put the highscore somewhere on the screen, as well as the current score, so players can track their goal while playing.
Other than that it´s a very solid game!

I had sooo much fun while playing these game! CGSky wrote that he didnt liked the auto restart. Well it didnt even restarted by me. I had to close and open the game every time I failed. It was a really good game. My highscore is 98000 but I dont remember seeing any speed demon achievment. I had fun by the way!

Just realized I forgot to enable the startup sequence, so here’s a 1.1 release. I’ve also added a score screen so you can see what achievements you get etc. 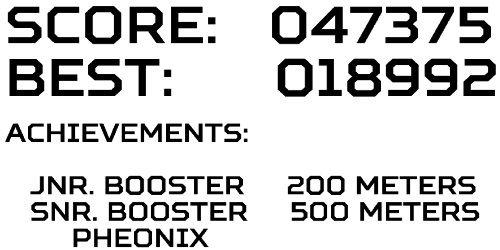 I could see benefit from having a slight camera-parent offset so the to control is a bit smother.

@Szlobi:
I’ve added an extra zero to the score so that you won’t disrupt the font alignment should you make it past 100,000…
I haven’t released that version yet though - but you can try the beta zip file from the first post.

@APilch:
Congrats on getting the Pheonix award. In my mind that’s one of the hardest to get. (Though I’ve just added some more I’m not convinced are humanly possible)

@Nicholas_A:
Hmm, thanks for pointing that out - you’re right, something is a little funky there - I think my damping factor is a little overblown (in attempting to stop the player from spinning, it’s applying so much torque it’s actually starting it spinning the other way - but slower than it was initially, so it still stops with the only effect being that it feels slightly jarring)

Have a play around with the value PLAYER_ANGULAR_DAMPING_FACTOR in defs.py - I think it controls what you want. (You may have to twiddle the sensitivity (or PLAYER_SENSITIVITY_FACTOR) at the same time). I reckon dropping to down to 30 or so makes it feel a lot nicer. (You may have to drop the mouse sensitivity (PLAYER_SENSITIVITY_FACTOR to around 60) as well).
I’ll continue fiddling with this tomorrow and see if I can’t find even better values.

I love it. Played the final version and it was really fun. Th visuals are amazing.
Great work.

Thanks for all the positive feedback. I may need to adjust the scoring at some point, because most of the points currently come from bonus’ so you’re better off aiming for those rather than trying to get really far. That’s (one reason) why everyone is getting pretty similar scores.

Let’s see if we can get a game noticed somewhat.

How did you do the curved energy bars? I’m quite perplexed on how you made them.

When working on Inferno, I wanted to have curved health bars. Normally I do health bars by having a plane and animating it’s scale. It’s fast and easy. But now I have an even better way that I will apply to normal bars in future as well. The...

(In other words: check the node shader)

here’s my gameplay video on your game