BGMC 36 is currently planned to begin in the end of July/ beginning of August but I just want to make sure no one looking to participate misses it this time.

I’m starting this thread to help keep people up to date on the next BGMC. If you would like to be alerted when announcements are made for the next BGMC, just leave a comment in this thread saying you’d like to join. Then I can @ mention you when I post updates for the BGMC. As long as your preferences are set to default, you should also receive an email whenever you are mentioned.

Yeah, I intend to participate.

It’s also good to use the Discord server, try to get the permission BGMC Winner and send messages with the @everyone tag to notify everyone there… Unfortunately no one gave me this permission on the last BGMC though.

I’m excited, though I’m usually lurking around the forum anyways so you probably don’t need to tag me (you can if you want), that timing would probably be pretty good for me, I think early August would be good because my classes will be completely done and I’ll be home

I’m so in. I want to participate

I hope so, late July or early August would be great, between my school and my vacation

Yep! Still a go for BGMC36. I figured August 1st - 8th. Or should it be pushed out another week? Anyone got a preference?

Regarding the asset packs, here’s the situation:

I said to myself alright, first off we need some systems setup to speed up production. Well, I went overboard. So for UPBGE 0.2.5, now we have:

Result is I have all the tools to make assets really quick, but not a lot of assets made; mostly boxes, barrels, abstract test stuff and this modular castle building thing: 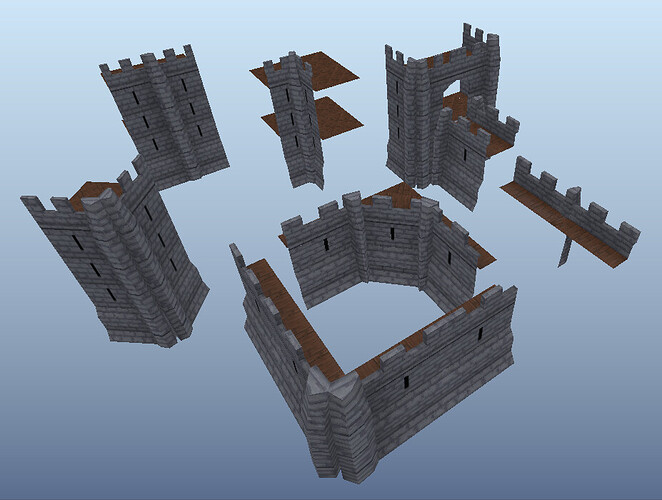 And so right now I’m going to be marathoning asset-creation until I can start putting out packs proper. My themes to work on (for now) are:

But if people WANT a theme in particular – specially if it’s something outside my list – maybe we can cast that to a vote earlier or something. Less guesswork for me.

I don’t know if there’ll be enough time for game logic or animations to make it for this one (I’d have to port stuff over from dsm which could take a while) BUT about two weeks is enough for me to make a good number of mapping pieces and props.

Also, guess I should’ve made my own thread for this weeks ago and somehow forgot about it? Eh, no matter.

I think those dates will be best for me, I’m not sure when my family is going on vacation, and I can’t sit around on my computer

I’ll figure out my schedule soon, and maybe get my brother involved again @Hibyehello

im in XD send me a notification

The theme has been decided: TWO COLORS
BGMC 36 will begin tomorrow. (Aug 1st)