from Ton’s twitter
Not exactly sure what was happening…can anyone fill me in? 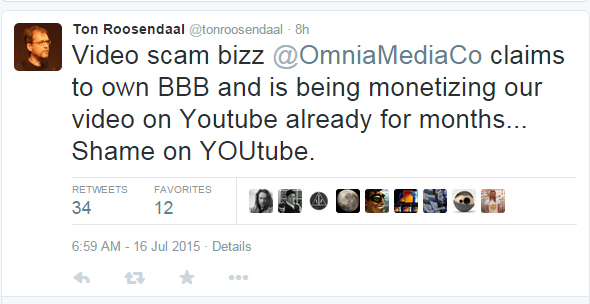 Well this happen more often, people claim on youtube that a video is theirs, while its not theirs.
This can result in that all comercial adds projected over the video add to their income.
I dont know if that is much, since i always disable adds on my youtubes, i dont like them.
But youtube also will ad adds, if they think that for example your movie contains in the background some populair radio song.
In that case I dont know exactly how that works, but i think they reserve, or payout to that populair Band.
I’ve seen it going wrong with with some Irish music (the music was to old to be copyrighted folk songs etc).
Then some rapper made a rap song on that Irish lyric, i uploaded my friends guitar and vocals on youtube.
Then youtube told me that the rapper owned that song rights… bizare.
I dont think it ever setled, but the least i could do was claiming a copyright violation at the rappers youtube channel.
I saw this one more time, with a Radiohead song, that was diliberatly posted as free on internet, a toonboom animation using it got adds…

I think their system is screwed, its often verry hard to settle things.
But i tink since Blender is so widely known this will settle, we had it before with Sony Pictures, claiming it was theirs.

seeing as it is a almost 100% certainty that you would NEVER be sued over the false clams under the DMCA
and it IS !!! imposable to be sued if a “computer program” sends out the notices

this is how it works

i Ignore ALL counter claims for the 90 days allowed

this gives me an additional 90 days AFTER i here back

you GOTA love the loop holes in the DMCA

“Big Buck Bunny” is known to be a product of the Blender Foundation and its trailer quite plainly states how it was licensed. And this form of license has legal “teeth,” already tested and proved in the court of law. So, anyone who claims to own it, hath not a leg to stand on. (BF is not that stupid … :yes: )

It might take a couple days for YouTube to clean it up, but the falsity of the claim is incontrovertible.