Alrite, I did a Blender project for my art project, and it took 181 hours to render. i have no idea why, there was a minimal amount of reflections and a minimal amount of faces in the render. I only used three lights, and it was done on a dual core 4600+ processor with 1 gb ram and 512 mb graphics card. The rendered image is below. Straight off can someone tell me why it took so long…
Also there was a bug, I can’t add any lighting sources, it shows up as selected but I can’t move it and can’t see it. Also the moving of the entire project, a - a - g, doesn’t work. It’s a bit technical but I’d be grateful if someone could tell me how to fix it or pass me on to someone who can because it’s for my final year school project and I’ll need to tone down the rendertime and other aspects otherwise it’ll take three weeks to render! 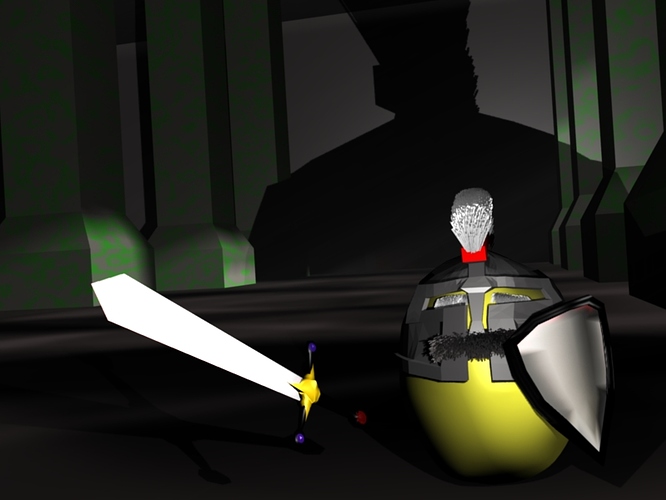 are you using ambient occlusion? if so, how many samples is it set to?

just the normal rendering sequence, I haven’t talk myself nodes yet. it went into the ‘filling octree’ stage for a day or so, up to over 2 mill.

on the render panel there are octree settings, right next to the ‘premul’ and ‘key’ buttons. the default setting is 128, and if you turned that up, it will take longer to render, so make sure that is on 128. really, though, even on setting 512, it should not take that long to render. check also, the ray depth setting in the materials buttons, for any materials with raymir or raytransp on. a ray depth of 2 or 3 should be sufficient. so check those 2 things, and we’ll go from there.

The ray depth is 2 and the octree settings were set to 64 deliberately to cut that down… but it didn’t help, I’ll see if I can upload the blend file…

try deleting the lamp that doesn’t appear in the scene. or appending the whole scene, except for the lamp, to a new file, and then try it.

How do you switch the whole scene across?

open a new file, then use shift F1, and navigate to your file > object > right click or shift right click to select ( or a to selct all ) make sure the lamp is not selcted and click ‘open’

Ok I’ll try that, it seems to work on this computer but trying anything on the second layer lags it too much. I’ll test and post the result. Thanks for the help =).

The rendertime decreased, but it is still long enough that it could cause problems, around a few days. I need some optimization tips, if anyone could give them.

I can try that, it’ll take a while but I can do it, anybody else?

from what i noticed your file is enormous 33mb

also in the blender internally it shows only few polygons and meshes, but if rendered in the render window it shows more than 5 Million polys!

so my guess is that there is a lot of “junk” in the file, like hidden/small meshes you cant see and/or werent deleted properly.

unfortunately i dont have time looking for them, but the import your scene into another file should help.

Yeah i noticed that too, I went through the list of objects that were in the scene, they are all viewable, if you look at the scene you will notice the polys are set to low, to stop it lagging but the render polys are higher. I already imported into another scene, but it only decreased the time slightly rather than dropping it dramatically, so I may have to go with JO9s suggestion and delete the faces that aren’t visible… all severall mill of them…

I was wondering if there were any other methods of optimizing renders? Other than deleting vertices.

You didn’t play with the Multires button did you? Or apply any subsurf modifiers?

I haven’t downloaded the file (I don’t want to wait an hour do to so), but if people are saying there is 5M polys to render and the file is 33MB then I’d guess it doesn’t fit into 1GB of RAM. I’d guess the disk LED was shining during whole render becasue of swapping, and therefore it was impossible to use processor effectievely. Lower the polycount, or get more RAM.

Octree is used to optimize raytracing, higher numbers for lots of polygons that are far away, but then you also need more memory.