I wonder if there’s any option that I should be aware of when I work on big scenes? I had to increase camera clipping to 50 000 (default 1000). This should give you a hint how big is my scene. But whole render looks very noisy and dark. I use sun lamp and HDRI. Should I check some options that are important for such scenes?

scale is somewhat relative, at least if you haven’t a really tiny object in a gigantic space. You can always scale up or down your scene to some extend.
Once I tried to model at real scale the earth the sun and a satellite and went into the limits of blender. But in your case it looks like ok.

Can you post a screenshot so we can see better what are you talking about ?

Depending on how much glass there is in your scene, there can be indeed darkening. Because there is a limit to ray passing trough glass.
look there at Ray Depth : https://www.blenderguru.com/articles/cycles-input-encyclopedia

Thanks for help. I don’t think it’s a problem with glass. Maybe I’ll reduce contrast a bit. This is how it looks. 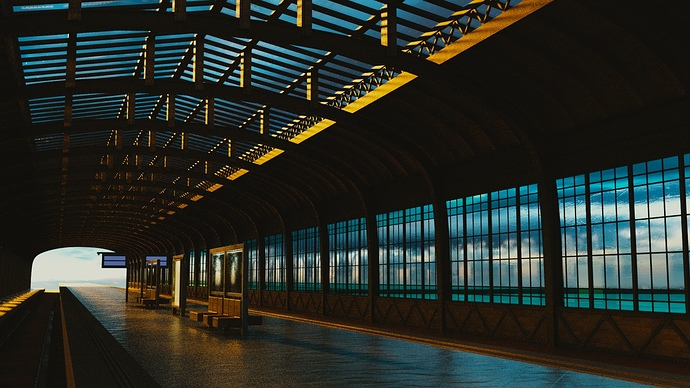 Make the color correction in the compositor and take in addition the denoiser.

If you’re working with Filmic (under Scene), you must change the Color Balance to Offest/Power/Slope (ACS/CDL).

I found one more advice - when light sources are too tiny they can give a lot of noise. You must apply its scale (ctrl+a).

Also, look at this scene as a real photographer would necessarily do. If you walked into that car-shed, your eyes would be able to discern detail everywhere, but only because your eyes scan the scene to allow your brain to construct your “impression” of the scene.

An actual photographer would fill the set with hidden strobes and soft-boxes, carefully injecting light into the scene to create a properly “realistic” (sic …) impression. That is to say, to ensure that the tonal range of the lighting was both “plausible” and within the resolving-power of the film. Video is actually much the same way, whether we’re talking about actual videography or CG.

“The sun,” in such a scene, is basically “a ‘practial light.’” That is to say, it is an object visible within the frame which the viewer will understand to be “a light source,” but which is not(!) going to be an actual light-source – in terms of exposure – at all! :eek:

Knowing that the sun is up there, and (judging from the shadows and light-patches) where in the sky it is, and perceiving no other source of light, the viewer will have certain expectations with regard to the lighting that he sees. But it would be both difficult and unnecessary for the sun to actually be contributing any illumination to any part of this hall.

I was once present at a magazine shoot of the interior of a historic hotel. In the spread, “sunlight is streaming through the skylights” in a lovely, pleasing way. But what the magazine reader does not know is that the photo was taken at one o’clock in the morning on a moonless night! N-o-t-h-i-n-g in that utterly-convincing photo is as it seems.