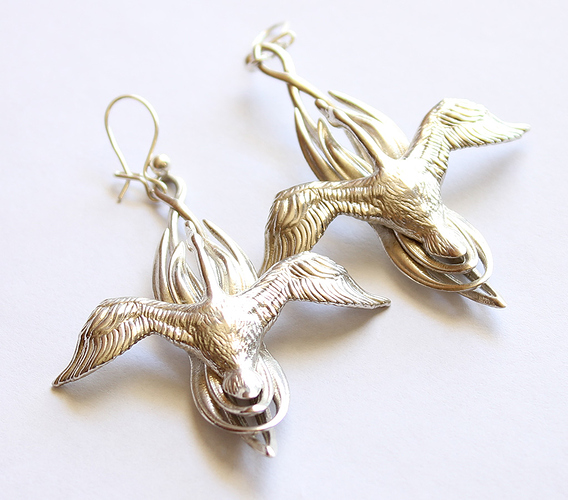 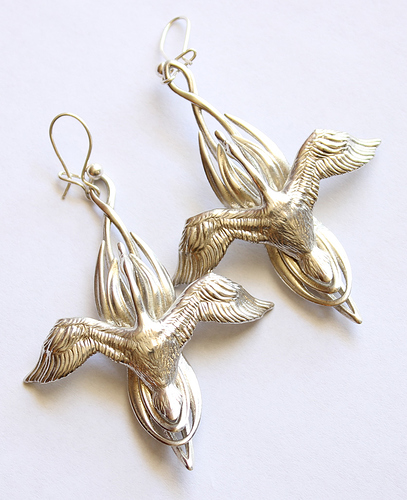 These were designed as gifts for my sister and cousin for their 21st birthdays this year. They get along well.

As such they aren’t for sale on Shapeways, but I rather enjoyed the experience so I’m hoping to do different items for sale later on.

Previously I’d done all my jewellery by ‘hand’ but I saw this thread http://www.zbrushcentral.com/showthread.php?135212-Mouse-Jeweller-s-Work-Bench
and I was inspired to give the 3d printing another go. I’d tried before, but for various reasons I’d never actually had a piece printed.

The basemesh was modelled in Blender, sculpting of the feathers and other tweaks were done in Zbrush. I then used the 3d print exporter from Zbrush and did some final final tweaks in EasyFIT as recommended by the Shapeways support team.

The main technical hurdle was wall width and resisting the urge to make parts too delicate. But then you take a step back and realise you are working on an area to be 0.6mm wide…

Overall, very happy with Shapeways. The polish/finish on the back of this pair could have been a little nicer, but thats about it really. Nothing a tumbler probably couldn’t fix if I had access to one. For those who know the site, this is ‘Silver Glossy.’

Hi,
realy beautifull design and cool use of 3D printing.
Would it be possible to know the size and volume of these earrings ?
Have you ever tried some other materials on shapeways, does silver allow as small details as other materials like “White Details” ?

Beautiful!
Awesome idea, i cant imagine a more individual present (thats something to keep in backhead)

I ended up with several versions of the file trying to fix things, but this should be the info:

Dimensions - 4.6 w x 5.8 d x 0.9 h (centimetres) with a volume of a bit under 3cm cubed. Fortunately they were not too heavy to wear, which was another concern being silver.

I have had another print in strong white and flexible - not the ultra detailed one - but that is another non jewellery related work. That one is being touched up and then painted by a workmate though so I’ll post about it later. 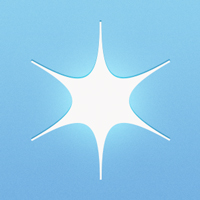 That will give a better idea of comparisons than I would, but on a practical note you can go quite detailed with the silver. Keep in mind that its a wax master that actually gets printed and then the rest of the process is silver lost wax casting with the usual ups and downs. It’s as much about what the wax can take when printed as anything.

Ok thank you for these informations.

A quick Cycles render, with noise added in post pro for personal taste reasons. The mesh got smoothed out a little from the actual one. Click to enlarge. 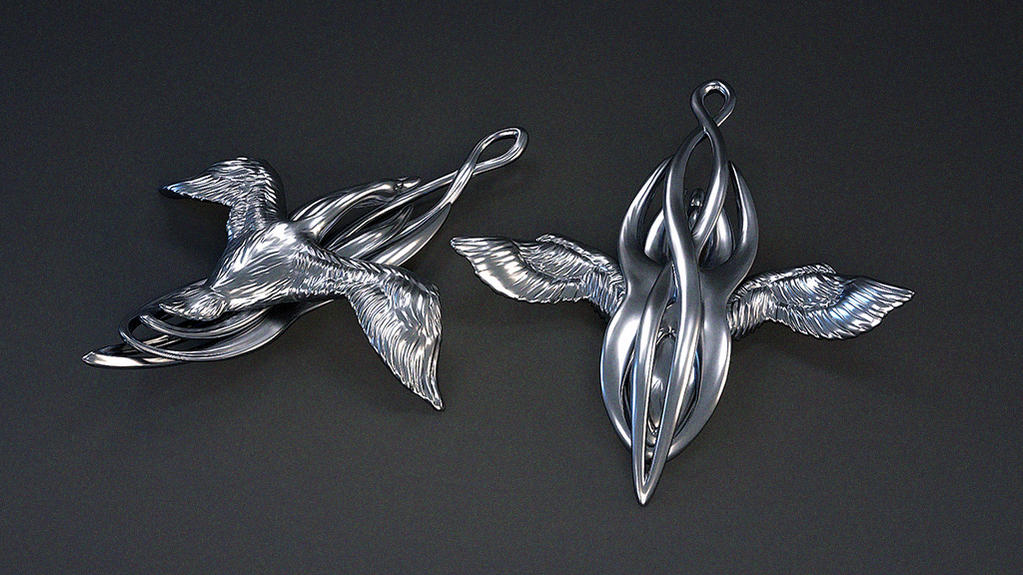 these are great photos, we can see that this printing technique is really well detailed.

Bravo!!! BenDansie.
3dsculpting and printing is my dream. Against this, we may lose the real scale. I mean, a statuette, with so many details without to be able to imagine how it looks, placed somewhere in a room. Under real lighting.
Here we need cycles. LOL, indeed.

I should find a nice pencil/coin/etc for scale comparison, but the model is 5.8cm long as mentioned.

As a side note, trying to get another piece done (unrelated) and I was returned with a “remaining shells” error. Ah, the learning process. I tried Zbrush Print exporter this time, which may or may not be the issue. I am actually enjoying the fact that there is no reliance on a renderer as such, but physical printing just causes a different set of limitations.

Wow. Hadn’t seen this stuff. I just might have to upload my shapeways prints.

I’m amazed at how good this work is, on the virtual and on the real side too… just make me desire to experiment something with shapeways! 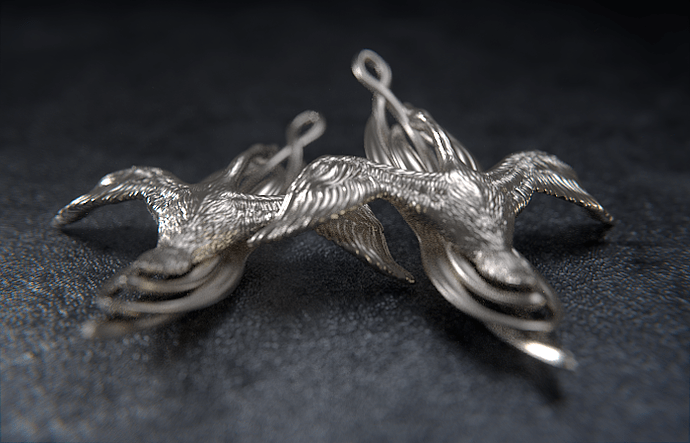 A couple more Cycles renders, worked out much nicer than the previous render. Nothing particularly dramatic in the settings, just getting more familiar with the subtleties of Cycles and how to put it to use.

Currently rendering a turntable of the gold one. 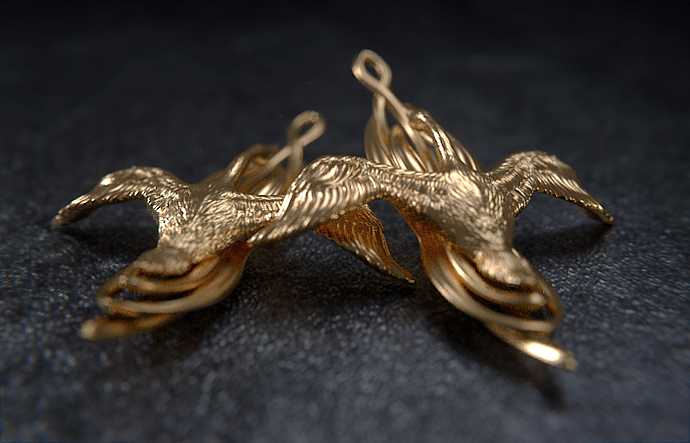 So you bought an even better camera or probably learned how to take nice photos.

Are you sure those aren’t real?

I have to say that I love the design, somewhat futuristic and yet with a touch of class or how to put it.

Once again, thanks for the comments.

After work I should be able to swap out the model for some suzanne heads or something and then post the file itself. The Cycles side of things is actually quite simple, there is just a ‘bit’ of fiddling with the compositor to tweak the results.

I’d rather not share the model as it is a gift and therefore more special if they are the only ones ever printed. Still looking to get more designs printed and for sale though.