Hello, new guy here. I want to know what I’m doing wrong. See the area around the vents? It looked ok until I selected the outer edge and extruded along the Z axis. Then these dark spots appear. Adding a subsurf modifiier gets rid of most of it, but I want to make this a low poly (~15k tris) model for in-game use.

This is my second attempt at my first model. I had modeled most of the car previously, but it didn’t look very good, and now, in the early stages of my second attempt, I am having the same problems, so I guess I"m making some fundamental mistakes. 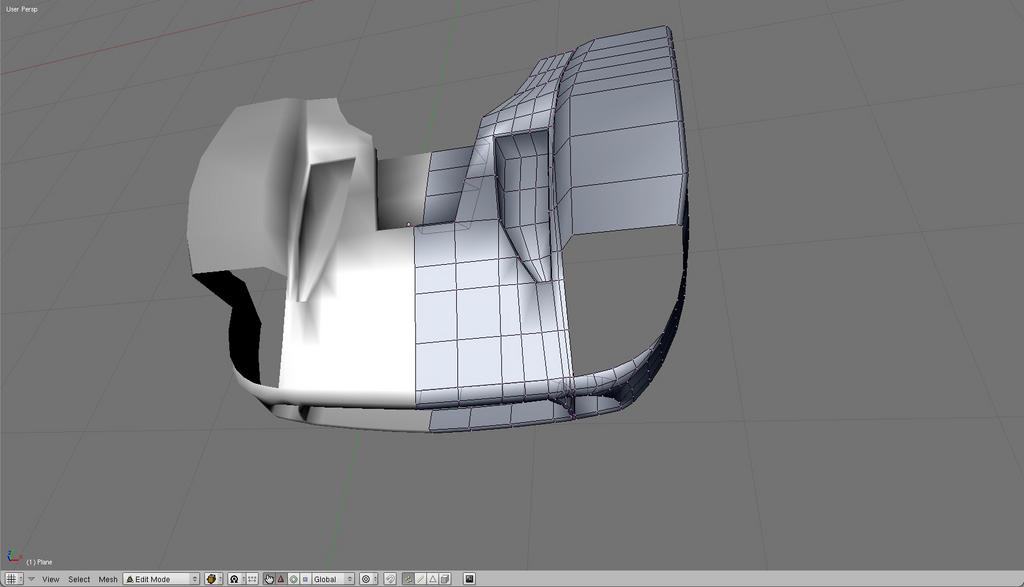 I believe the problem is with using Set Smooth. Assuming you are using something like Blender version 2.49, Set Smooth smooths all edges, including those at 90 degrees or greater. That’s what causes the artifacts you see. Try adding the EdgeSplit modifier. If that makes a significant difference in the artifacts, then smoothing was the problem. Try adjusting the Split Angle or marking some edges sharp (Ctrl-E > Mark Sharp) to optimize.

to solve your issue -
1.add a loop cut close to the edge of the vents
2.or “set solid” the faces with the artifacts
3.or try “auto smooth” which will not smooth the problem areas
4.or add a split face modifier - this will do a similar thing to “auto smooth” but detach the faces above a certain angle so they won’t smooth (or give you artifacts)

to view the correct smoothing in the viewport you can add a edge split modifier, that should fix the black spots.

Usually auto smooth will work, but at the time of rendering, and in OpenGL and rendering for other pieces of software. These dark areas, even creasing happens in nearly any software using smoothing on an angle that in most cases doesn’t require smoothing, but it tries to. A good auto smooth angle is 32-40 degrees on average meaning that anything greater than these numbers is not smoothed and the smoothed interpolation doesn’t break.

Hi, I felt compelled to reply to this thread. I am a fairly new user of blender, and 3D modeling of any kind, and am working on my first model - a 1991 Pontiac Firebird. I have had the dark spots/artifacts problem for weeks now and have searched everywhere for a fix. I came across this thread and tried the Edge Split modifier and FINALLY everything fell into place almost perfectly. Just a few adjustments to make. I wanted to thank those who suggested this as I do not know a whole lot about these features yet.
Thank you again
-Chris

Thanks all for the explanations and suggestions. I played around with the edge-split modifier and added some more loops in places and managed to get it pretty smooth. Of course now I have the same problem in other places but now I know how to fix them