Blast from the Past

Here’s an old one I decided to remake with cycles. Post pro color correction in Blender and increased the contrast with GIMP. 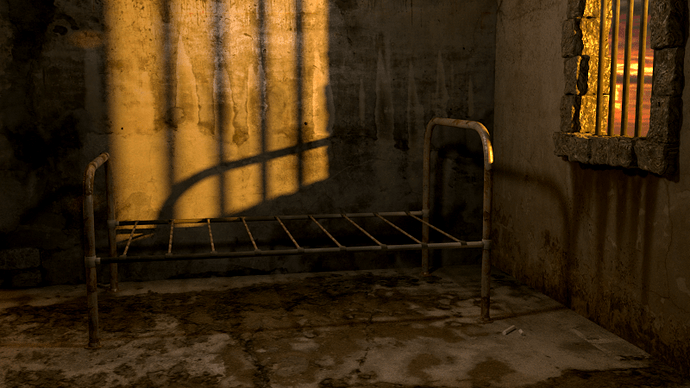 Rendering a high res version now, probably have it up later tonight or tomorrow.

I especially like the lighting near the window! It just catches my eye

Great. One thing though - what light source is causing the bed to cast shadow to the right (below the window)?

There’s a lamp on the ceiling not pictured. It’s also casting a shadow of the bed frame onto the ground below it. The lamp is roughly in the center of the room and is the majority source of room illumination.

By the by, I have been to jail before and my cell was actually very similar to the one depicted here. The major differences were that the real cell was much smaller, darker, there were no windows and there was blood and feces scribbled all over the walls.

Oh and I didn’t have any chalk as is pictured on the floor here. The only thing I had was a small towel that could be used as a pillow or blanket.

Thanks friend, it was a fun project.