When I hit F12 to launch a render I want it to appear in a small split screen corner of my interface, not pop out into its own window every time…
Anyone have any advice?

Why don’t you have a look at the Render menu? 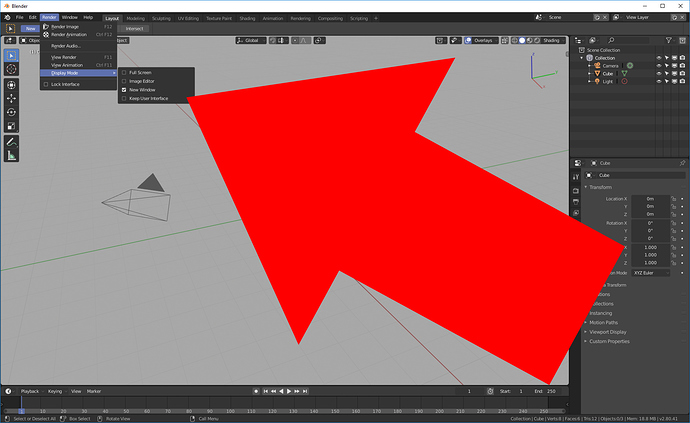 ahhhhh thank you so much! I was looking all over the new render window instead!

This option is no longer present on the menu in 2.81. Any idea where it went?

Hi, it is now in Preferences > Interface > Temporary Windows.
Nobody knows why, not really usable when you change that often.

I noticed I now got new window every time, that the menu item was gone, but I did find it in the prefs so no biggie for me. I’m only setting it once, so having it in prefs makes sense to me.

Why do you change it often?

Hi, not often but sometimes I have a floating window open with shader settings on second monitor. If I render it change to render view and I set it to image editor.
Not really a problem but why it is not in window menu as temporary window called in preferences.
UI produce always discussions but I do not want to start another one.

I don’t know, but there must be a reasoning behind it. Not like they got to work one day and thought “hey, let’s just mess with them”. That is more microsoft standards

But speaking of “hidden” stuff in prefs; is there a way to invoke “rotate around selection” as a key qualifier instead of setting it up in prefs? I usually prefer this not activated, but occasionally I would prefer it.

But speaking of “hidden” stuff in prefs; is there a way to invoke “rotate around selection” as a key qualifier instead of setting it up in prefs? I usually prefer this not activated, but occasionally I would prefer it.

Not that I know.
I want to start looking to python scripting since 10 Years or so, may a good start point, it is only one checkbox to add, hehe.

I think it saves memory when minimizing the render window while it renders.
https://docs.blender.org/manual/en/2.79/render/blender_render/optimizations/performance.html
On link page look under Blender settings (this is 2.79 though so not sure if it still applies)

Related question about Render Window, if you size it down to “Zoom 1:2” from menu or NumKey 2 it will stay that size even on new F12 renders but what makes no sense is the window will maximize if you sized it down to the 1:2 size. I might have 1/2 size so I can get back some real estate. Paper Cut maybe?

Hey guys, this menu no longer exists… What’s the new location of these settings in 2.90?

I had the same issue, and while I’m pretty sure you’ve found the asnwer to this question by now, I wanted to reply for those who find this via search-foo on the web like myself.

The answer is that the feature was moved in 2.8.1 - it’s now hidden in a sub-menu in the preferences dialog box. Thanks to Pisurquatre on StackExchange for the answer; it’s the last answer on the page. I’ve selected Maximize Window and it’s rendering my animation fine BUT the actual output mp4 of the file shows all black. Anyone know why it does this?

Didn’t happen when I had the render window at default.

NOTE: I switched to this maximize window because it kept my render of Giant fluid sim from crashing.