So, I downloaded Blender 2.8 for Windows 64 Bit about two hours ago because I wanted to test the new EEVEE render engine. When I wanted to add the Metallic material to the default cube, which apparently is needed to make any material in EEVEE, it just didn’t appear in the list of shaders when I pressed shift + A in the node editor. Even though the Specular shader, which is also only available in Blender 2.8, did. And I do not have any clue why… I redownloaded it several times, but that does not help also. Hopefully there is someone that knows how to solve this problem, because it’s just frustrating… Here a screenshot: 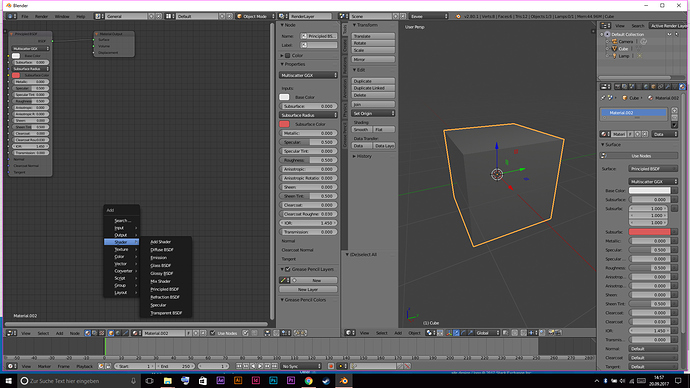 I couldn’t find it either… but you can use the principled shader instead.

2.8 is still in a very early development stage!

Support for it is out of the question, and the availability of the 2.8 code is only for debugging and testing.

Must be an issue with recent build. I downloaded a few weeks ago and it had the metallic and whatever the other one is in it. Don’t expect much of it to work,lol.

Thanks for the answers! This really helped me out a lot!

Where can i get builds that contain metallic shader? There are tonn of cool tutorials on youtube using metallic shader. It`s a disaster to loose it all like that. If someone has version that has metallic shaderin it could you please share it with me? Upload it maybe somewhere?
Will be hoping for miracle)
Thanks!!!