I bought Embergen a few days ago.
Testing the fireshading in blender 2.9 where I originally setup the shading, then opening the scenefile in blender 3.1 alpha, And the shading is a bit different.

It actually looks better in 2.9 cycles, than in 3.1 cyclesX, in terms of the fireshading scattering, in 3.1 the fire seems too damp and isn´t scattering in to the volume as much.

I checked rendersettings and light setup, volume bounces, color management…all that seem to be the same, now there is only one curve node fed in to the colour input for the principle material, and I can see that this rgb curve is different than the one in blender 2.9 …which have an option to set standard or filmic, the rgb curve in 3.1 don´t have that.

So I am suspecting it is either the curve that is totally different in some values, or probably something with the black body, scattering etc.

Another note though, 3.1 CyclesX seem to clean the noise better, and also a sharper look to the smoke which is nice, but I just need to find out why it is clamping the scattering of the black body, flames so much.

In the end I may have to get used to setting it up only in 3.1 I suppose, and not trying to force the older scenes in to the newer, but I need to understand why it is clamped to get the same look in the end.

Just cranking up temperature or black body intensity isn´t helping in 3.1, chaning the curve profile or values seem to fix it better, but I wan´t to know what´s happening before messing around too much.

Renderspeed by the way 19:91 for cycles, and 19:51 for CyclesX, a bit faster…but I had hoped for more speed improvements there. 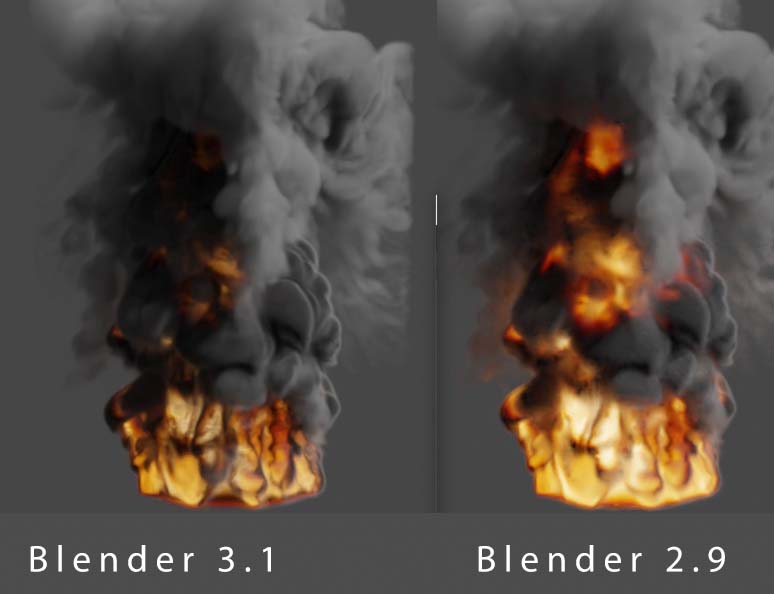