Blender as a sketch tool: Documentation of "the Chicken Grill Project" (tCGP)

I wanted to share a good use of Blender with you: Blender as a sketching tool for biiig things to come! (Yes, I consider our work as “art” that’s why I think it’s appropriate to post it here, hope you agree…

So a friend of mine and me, we decided to build a chicken grill. Here is the full report:

Phase 1: Concept:
Most projects benefit from a decent concept that is thought through and planned thoroughly first. In our case I tried to draw a scatch with paper and pencil first. I soon found out that my skills with a pencil are rather poor and changing things afterwards is really ugly and cumbersome… so I switched to Blender really quick and did a rough model of our glorious grill; the chicken grills feature list:

This is the outcome of phase 1: the general shape is set, but exact dimensions and details are still to discuss.

I’ll report about phase 2: “Detailing the sketch” soon (the project is finished (!) but the documentation takes some time, sry) 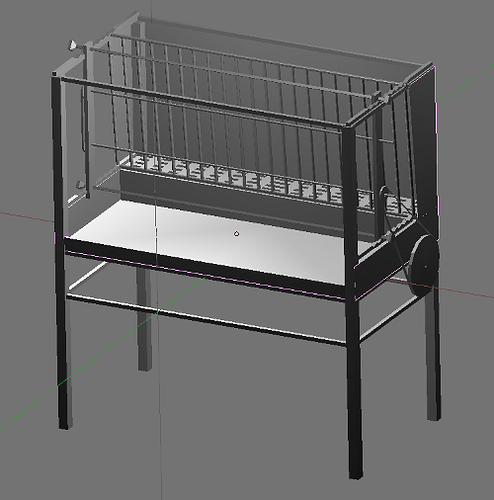 Up until now, the exact dimensions weren’t decided. So we took a few screenshots of the grill, printed them out and than discussed over the measures.
Yes, every decent engineer would throw his hands up in horror… there are of course nicer and more exact ways to do this but for 2 psychologists, that’s not that bad, is it?

Based on our sketes we calculated what materials we would have to order. Our shopping list was this:

We actually got some other units lengths, depending on the availability at the distributor… in total we payed around 105€ for the material, including delivery.

Here come the upgraded Blender sketches. Phase 3 “Construction” will follow after this. 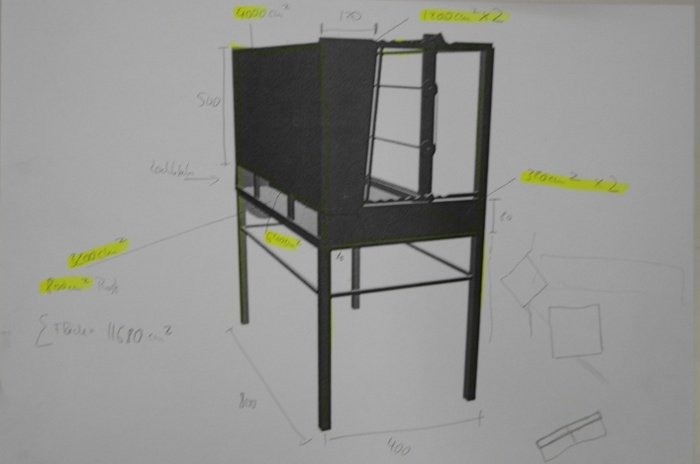 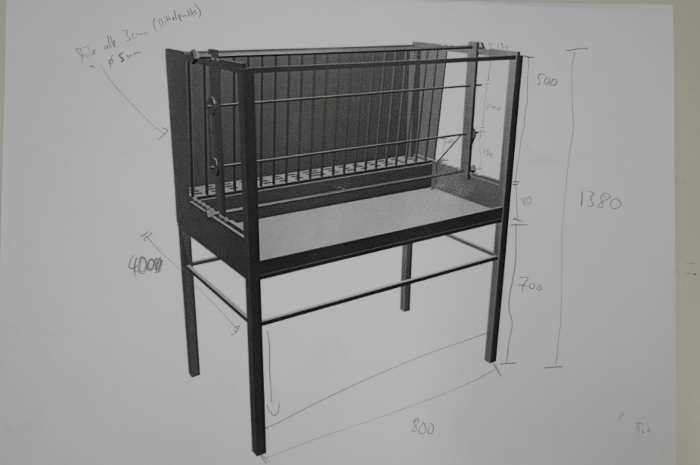 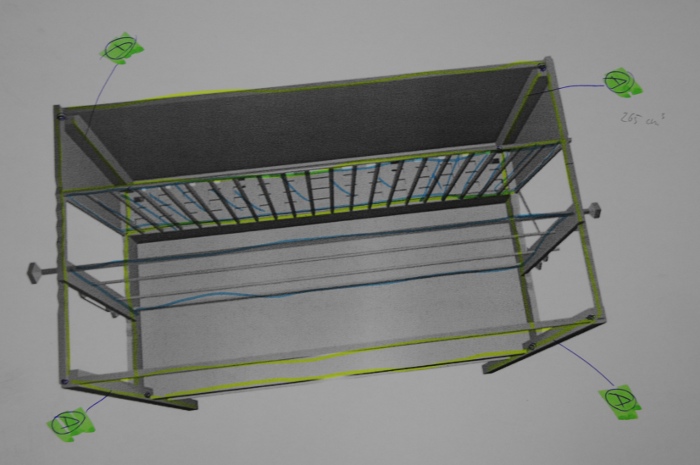 Thanks to a friend of mine, we had the chance to do some of the work with real professional tools, that was nice!! A drilled hole, that took us about 5 minutes with a standard, noob-blunt-metal-drill was done in about 5 seconds without any hassle, yeah!!

As we didn’t ever do any welding before, the friend of mine gave us a short introduction into the arts and supplied us with a simple electron beam equipment. I’m affraid we won’t win any prizes with your weldseams but at least they are doing a great job at holding metal pieces together.

As for the chain drive we decided to spend another 50€ on some really nice hardware; expensive, yes, but at least much easier to realize than customizing a gear from an old bike. Looks nice, doesn’t it?

The motor is from an old truck windshield wiper, runs at 12V and has an integrated transmission.

As you can see, we had to make decisions regarding the chicken-spit carrier of the frame: with the current construction we can take off each spit separately without worring about the chain drive nor the other spit.

We painted the whole thing with heatproof oven paint; of course at spots that get too hot the paint will go off, but that’s ok…
We didn’t really finish the 4 legs at that time, the plan was (and still is) to cut them close to the corpus and add 4 detachable legs for easy transportation. For the chicken beta test, that wasn’t necessary though, so we just left them for now.

Time to see if it works!! 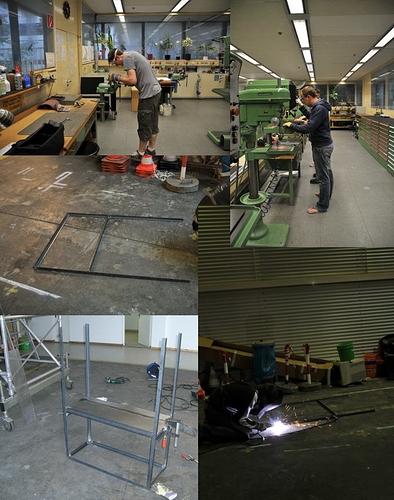 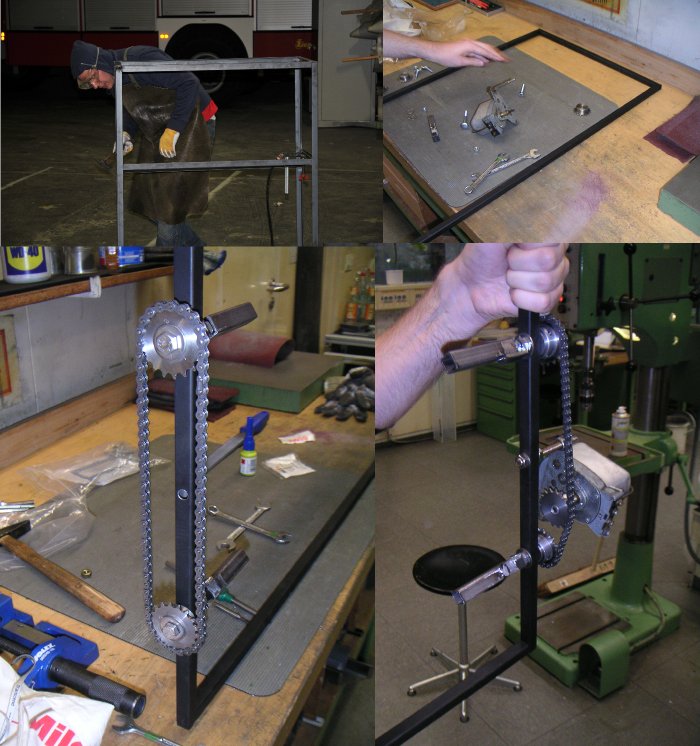 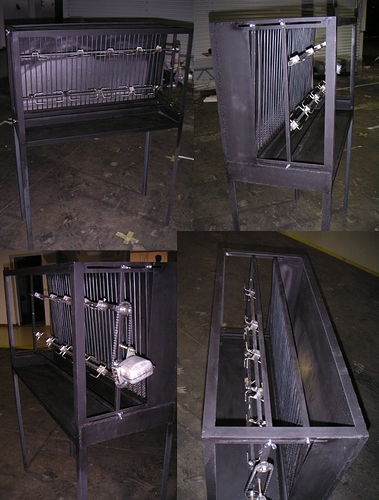 To see all the grills strenghts and possible weaknesses, we did a closed beta test:We took standard chicken (the next chicken will only be real chicken, not some industrial torture food!) and marinated them the day before. We used a self made marinade with garlic, onions, lots of oil, salt, pepper, sweet pepper and some other spices.
There would have been space for at least 8 chicken, but as there was always the chance of burning everything or maybe a problem that they may even won’t cook properly, we decided to run the test with only 6 chicken… oh and maybe because we were only 8 people whereof 4 were females (they just don’t seem to have the same appetite…).

Well, we found out pretty soon that we have to change the chain drive: the circumference of the pinion just has too little contact length with the chain, thus prefering to jump over the chain links instead of moving them… :mad:
Also, the speed of the motor was still too high, so we will have to implement some additional transmission; hopefully a smaller pinion at the motor will suffice…

Anyways, we just took the motor off and did all the rotating by hand. It was ok, you could even leave it for some minutes before turning a bit further.

As you can see the temperature distribution wasn’t perfect: the lower spit got much more heat. The main reason was that we didn’t fill the coal-area all the up with charcoal, we’ll to that the next time… by changeing the spits from time to time we managed to cook all chicken anyways…

I can tell you: they were awesome!

“Mission accomplished” (yes, there is still a bit work and tweaking to do, but not George likes simple statements 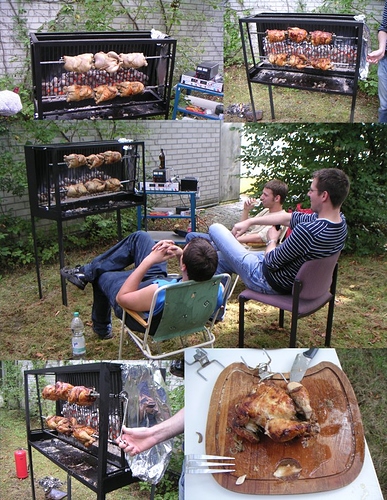 We did the whole thing during the summer, only worked on it occasionally and took our time. There are several lessons I leared from this project, I’ll write them down in no particular order:

That’s it for now, if some more smart-ass things come to my mind, I’ll let you know! :RocknRoll:

Thanks for your time, hope you liked it. Leave any questions or comments I think I could really discuss this topic for quite some time! (weeks? months!)

PS: I forgot to mention that we designed our grill that it is possible to operate it with only one spit right in the middle. This way we’ll be able to try our barbeque arts with delicious culinary grill items like turkey, goose, rabbit, and of couse: a little “Schweinebraten” :eek: 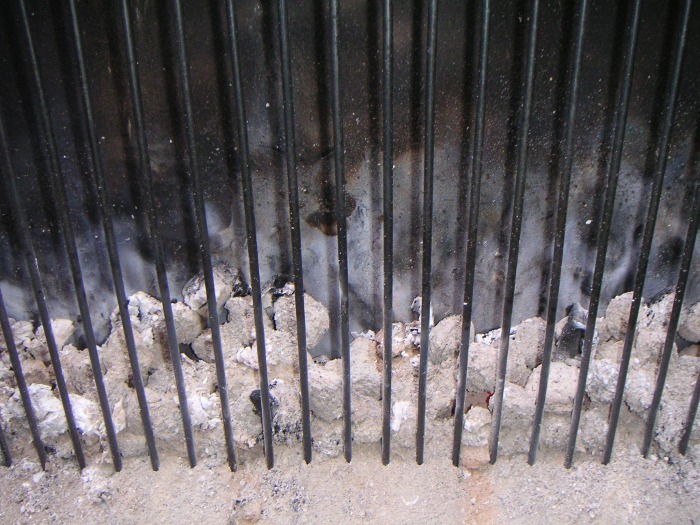 I’m not going to vouch for my professionalism in this matter, but I do believe that your chicken won’t be cooked through if you don’t have an enclosed airspace around it. Take the chicken rotisseries in some stores for example. They DO have flames, but also a rather small sealed space around the birds. Or a hog rotisserie (link), they do have a hood to cover up the hog whiles it’s cooking. To be honest, they same manufacturers also have a hog grill that is open. I would do some research to make sure meat roasted off of this gadget actually would be good enough to bother making this thing.

Cookery aside, on a technical side, it looks good!

Too bad shapeways can’t prototype this for you. If it works out, ship one to me, will ya?

Alright, I updated all placeholders!

@radialronnie:
Yes, I guess cooking would go a bit faster the more you enclose the chicken and the heat source. But there are two reasons why we didn’t do that:

Enclosing the whole thing would be a nice upgrade but that’ll have to wait until we are fed up with the current config… or until we really try to cook a piglet!
I really dig your idea about the rapid prototyping! Sadly my .blend model isn’t “waterproof”, otherwise I would have tried! (and if would have had some $$ too much in my pocket

And he saved humanity.

And he saved humanity.