Brief background:
I initially attempted to execute it a year ago when I first moved to Blender from max/maya. I failed to conclude it and had to freeze the project until 2016.

My main goal for this project was to find a nonlinear, (semi)procedural modeling workflow for hard surface meshes that would not impose step-by-step destructive execution nor other limitations of dominant hard surface modeling techniques. To achieve that I relied heavily on Blender’s modifiers as well as Houdini’s procedural modeling to preserve critical parts of construction history. Problematically such an approach introduces micromanagement overhead. To minimize loss of time significant effort went into prototyping various workflows as well as some python based tools. The scene in current state has over 350 objects, 90% of them with solid construction history(modifiers or nodes) and fast to change subdividable base meshes. Good use was also made of new lightning fast bmesh Booleans (big Tnx to Campbell).

Theme selection, shape and decorations are not accidental either. It is symbolic with intent to reflect genuine appreciation and gratitude to people behind the scenes as they empower every single Blender artwork! I hope this does not offend anyone.

Thank you for viewing! 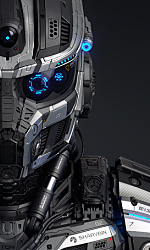 Nice to see you finished this project! That’s some pretty impressive modeling. Do you intend to add a body/backdrop later or only showcase what you’ve already done? Keep up the good work man!

If I had to give a critique it would be keep your level of small detail varied throughout the model to reinforce your composition, otherwise the broad curves of the mesh get broken and the eye doesn’t know where to go. That being said what you’ve got is extremely impressive! (5*s)

Impressive job for sure…Gotta respect artists who give their models the proper details treatment…takes a special kind of patience.

This is crazy good and the workflow sounds interesting although I won’t pretend I really understood.
Are you saying that you can easily change the design by tweaking parameters?
Either way, awesome work!

This is awesome! Congrats on finishing it

So the next step would be to write an in depth article or video explaining this workflow, there’s a lot of curious ones like me who want to know more about it.

EDIT : I think I’ve never seen such a detailed mech model made in blender.
I’m stuck on my chair. :eek:

Thank You guys sincerely for the kind words! Also forgive me for slight delay in reply. I tried update the image(new render) and prepare some material to explain process without spamming this thread.

To try answer some questions regarding workflow and showcase the scene, I attached a few screenshots: 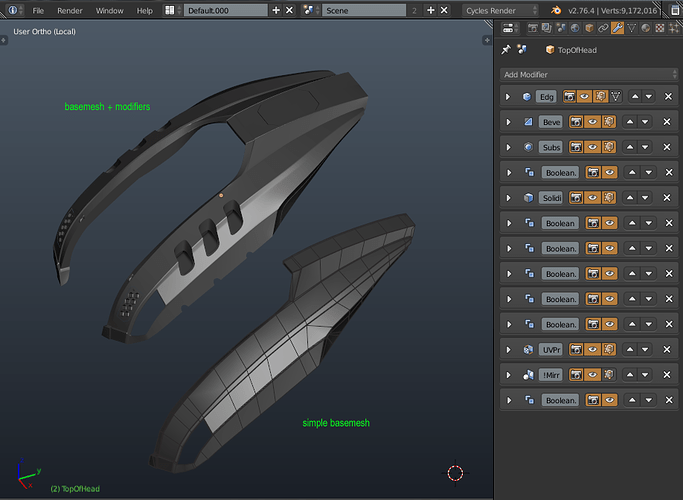 As you can see I try to keep the base meshes clean/light and fast to change while relying heavily on Modifer/Nodal(houdini) history to build more complex meshes out of them in a nonlinear/nondestructive process. There’s heavy reliance on Solidify, Bevels, Booleans, Lattice, CurveDeform, Screws, Arrays etc. Even the UVs are autoprojected(uv project modifier) from 4 dominant vectors which enables making cycles render previews with near-final materials possible at very early stage while mesh is still drastically evolving.
The whole idea is to bypass STEP-BY-STEP execution in favor of enabling rapid, progressive iterations to every part of the scene. There’s a bit more going on than this which could use a more indepth explanation (houdini part, python, workflow and other specifics) but it should give anyone curious a good overview and also highlight how Blenders powerful modifier based workflow can be applied.

Once again, Thank you all Sincerely!

I feel like a dumb in front of this. I don’t understand what you’ve exactly done.

i believe you should write an article or record a detail tutorial about your process.
I’m sure this artwork will be highlighted on many forums and blender media.
Make some noise with this artwork and post it everywhere. We’ll heard about it for a long time.

Wow this is amazing

This is an impressive project, 5 Stars!!

top row!
not only for the result, if not for the interesting workflow you handle on this image, I think this piece deserve stay in the gallery because could inspiring a lot of artist to explore more deep the tools that blender offer, this image is a prove how achieve a amazing and detailed result using blender with a lot of practice and patience!

so awesome!!! I love the fact you included developer’s names on the suit… very funny:)

This is so cool