I’m creating a wrestling animation, I modeled the arena, the wrestlers, commentators, and… The audience!
I used my template character to create the audience, with a lower poly count.

The Arena (Ring, seats, screens, miscellaneous objects) has only 280.614 triangles.

There’s a lot of different textures for the audience (I didn’t want a boring audience where everyone looks the same), so there’s 37 textures. (With no normal map, no specular, I wanted a fast render for my old computer).

So… Blender only crash because I have an old computer?
I’m rending with the CPU (blender internal render), I dislike cycle and confess I’m not at ease with.
With the audience, it takes around 30 seconds to render an image… So for a 5 minutes animation, it will take around 2 days to render the full animation!

Old version of the audience, but normally, It should look like this (With additional textures) 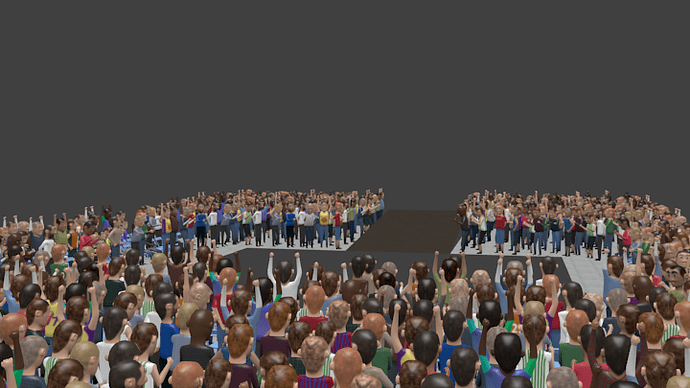 Hi, Blender crash if you run out of memory (RAM).
30 seconds is really fast for a frame, Blender movies need hours per frame on a big render farm.
May you can split your scene on different layers to keep the crash but you have to render two times and composite.
3D animations need powerful system with a lot of RAM, no way around I fear.
May you ask for render help here: http://blenderartists.org/forum/forumdisplay.php?53-Volunteer-Work
On a powerful system it need may only hours, I can render a few frames too.