It is well known that Blender limits some operations in various modes. For the most part they make sense, like you can’t edit geometry in object mode, but others are rather strange and don’t make sense.

For example, modifiers can’t be applied in edit mode. Why is this? Did they forget, did not enough people want it, or is there something bigger going on?

Some others I found which are annoying and/or unusual include:
Deleting materials in edit mode (this makes it more tedious when you’re messing with a ton of materials, you can’t just delete them as you don’t need them)
Applying modifiers to meshes with shape keys (like, couldn’t you just apply it to each shape key individually? What’s so hard about that?)
Modifying IK info in edit mode (switching between edit & pose mode can be a hassle on some occasions, though it’s a bit understandable, you want to be able to test IK on the fly. The best solution IMO would be to be able to edit IK in BOTH edit mode and pose mode)

I wonder what the Blender team’s reasoning is for these strange design choices, because they trip me up and make things harder than they need to be sometimes, even as a somewhat experienced Blender user.

Another unrelated issue is that, when baking, there is no selection for what texture you want to bake to. You just gotta select it in UV mode, and in edit mode, and “hope it works”.

When drawing curves on surface, you can’t rotate around the object and continue to draw on it continuously, add that to the list.

When editing the keyframes in the curve editor, clicking it wouldn’t move it, you have to click and drag it for it to move along your mouse, fair enough, but then when you are at the position to let go, lifting your finger from the mouse does not stop dragging the keyframe !!! You have to bloody click it again to do it ! This is just bad GUI design on a purely evil basis.

About the mode dependencies, the truth is that ANY operation that requires a specific mode can be scripted to toggle to said mode and back automatically without the user ever knowing. Many addons do that. I believe it’s officially frowned upon, because toggling between modes messes up Undo if Global Undo is unchecked. Not sure why even have the option to turn off Global Undo.

When editing the keyframes in the curve editor, clicking it wouldn’t move it, you have to click and drag it for it to move along your mouse, fair enough, but then when you are at the position to let go, lifting your finger from the mouse does not stop dragging the keyframe !!! You have to bloody click it again to do it ! This is just bad GUI design on a purely evil basis.

That’s easy to fix. But I agree, this should be default behavior.

Search for “translate” in hotkey editor.
Find “Translate” under Graph Editor.
Expand the one that has Tweak assigned.
Activate “Confirm on Release”
Save.

You’d be surprised on how many “Confirm on Release” I’ve changed.

Iceythe, your username is synonymous with savior to me now in this thread. 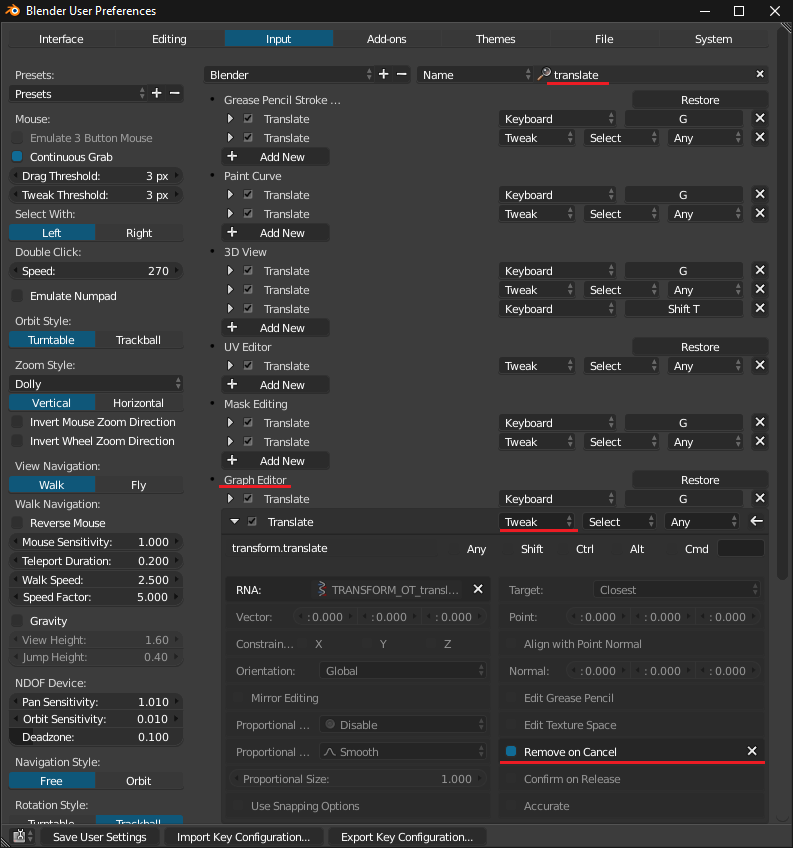 Wow that’s totally un-intuitive at all !
It’s a miracle you are able to figure that one out iceythe

I just turn that off globally. then you don’t have to do it for each thing. Though that is an interesting feature.

Works for me because I don’t like it anywhere - mostly. I don’t mind it in shift or alt D for example. That is on no matter what the global setting is. But release confirms setting covers most if not all of everything else.

For example, modifiers can’t be applied in edit mode. Why is this? Did they forget, did not enough people want it, or is there something bigger going on?

I have often wondered the same thing. But… the answer is in data blocks. And also might be something to do with the current limitations of the dependency graph.

Think of it like this. The Object is a container of data. Nothing more. The Mesh is the data. Mesh is its own data block. So in edit mode you are working directly on the mesh data. This same mesh data could also be included in another object container. This is what happens when you choose Alt D. But you can also access any Mesh Data Blocks from the Mesh drop down menu.

I am guessing that there might be a dependency which forces modifiers to be applied down through the object level. But regardless, as it is now, a mesh can have two separate Modifiers at the object level if the Mesh is used by more than one Object container. But each one operates through the object level, down onto the mesh. So the same mesh could be mirrored on one object. But have no mirror modifier on the other. The same mesh data could be mirrored and arrayed separately. And each object modifier would only affect that object. So one object is mirrored and not arrayed. Another object is arrayed and not mirrored. Yet the mesh data is the same. As soon as you apply the modifier, it permanently alters the mesh. And that change would show up on all objects using the same data.

Hope this helps clarify that.

In general. Be patient and keep learning. Often times you are right. Often times there are alternate ways to do things you might not be aware of.

For example I wonder how many people use the Outliner in Blend File mode?

There you can edit and delete multiple textures images and other data blocks directly all in one place. For deleting multiple you can use the B key to boarder select. Very fast and direct way to remove unwanted data or dead links to images you are not using for example.