Regarding heavy scenes:
Some of the Sintel files on the Blender Cloud have absolutely atrocious render times even on fairly good CPUs.
This heaviliy optimized scene (Embree, switched to BPT, no smoke, no volumes, no DOF) took over 3 hours on a 3900x: https://imgur.com/a/RC4CDWJ
With smoke and volumes on this became basically underrenderable on a home machine.
So if you want something heavy these files are really nice.

Yikes what was the memory usage? Also thats spring not sintel

I think it showed something like 27 Gigs used in the render buffer but that is never really accurate as you probably know. And that was without volumes and smoke.

Edit: With everything enabled it spikes at 35gb in the render buffer.

Thank you @haik-u for the huge amount of work you did to benchmark all these solutions.
It’s great to see how everyone performed, and to have a fair comparaison between render farms.

It’s been a long journey to reach this point, and we are happy to see such a good result for our GPU option !
This test also validate the path we choose a long time ago at Tresorio : With tremendous R&D, and a dedicated team, we can reach high performances at a minimal cost, while being eco-friendly.

Blender enthusiasts ? Be one of the first to test an eco-friendly cloud rendering Blender add-on for free, it’s here : https://tresorio.com/en/beta/

At Tresorio, we recover, store and reuse the heat from our micro data centers to heat the buildings in which they are housed, like an hospital or a factory. So, while you run your renderings, you’re helping to heat those buildings.

On the Tresorio platform, you can also rent a virtual private server, enjoy remote desktop possibilities, or set up your own Jupyter workspace, via a simplified interface, that can facilitate all your projects and tasks that require a lot of computing power.
Our team is at your disposal to guide you, collect your impressions, and provide you the best service possible.

See you soon at Tresorio.com

@Tresorio_Cloud Well done guys, you’ve improved your solution so much since I first gave it a test. This graph compares your old benchmark (top left) to all your new configs: Paperspace finally added RTX, the RTX 4000 is now available from the Californian servers. I ran the test file and the render (with optix enabled) finished in only 1m37s. Also it is actually cheaper than the P5000 option, at $0.56/hr. So the total render cost drops to only $0.015. Seems almost too good to be true.

Wow, sounds like I need to give Paperspace another try. I’m actually working on a huge update to these benchmarks and I’m putting together a little something to help display the results. Google sheets is ok but it’s a bit basic and I think the comparison deserves a bit more flare

Hopefully it should be good.

Thanks so much for the sharing that let us have a quick overview of render farms on the market. This comparison table is really detailed and meticulous

If you have some time, we would love to welcome you to our 3S Cloud Render Farm. We are a newcomer here and our farm is built for Blender Artists. Our farm uses CPU 48 Cores 96 threads, 192Gb RAM and GPU 4xTesla V100 16Gb VRAM, which is one of the strongest render farm configurations on the market. Also, we support Eevee, Cycles and Luxcore, and latest Blender versions: 2.79, 2.80, 2.8, 2.82, 2.83 LTS, 2.90, 2.91, so all Blender artists are welcomed and able to experience without any limits.

We are so happy to see you on our farm and listen to your comments. We’re open to all the feedback to make it better everyday. You can take a tour now at https://3sfarm.io/. We hope to be on the graph above on someday soon. Thanks again

@Splododyne I’ve not run any tests for Concierge yet, will definitely test them out though.

@3SCloudRenderFarm Hi, I’m glad you found the graph useful and thanks for reaching out. I’d love to test your guys farm out and include it in the new version of the graph once I have it up and running. Nice website btw, very sleek.

Reached out to Radarrender.com and they were happy to feature an article based on this thread 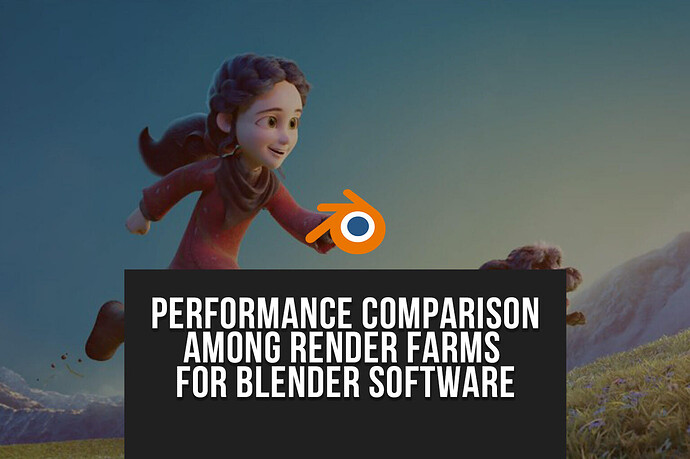 Find out which render farm is the fastest and cheapest in this render farm price vs performance article based on over 50 benchmarks of 9 render farms.

Contains an interactive graph I put together based on the data so far which is a step up from the still image pinned in this thread.

Currently working on collecting interest from render farms for a next stage of benchmarks so I’ll be reaching out to everyone who’s participated so far (If I miss anyone feel free to message me). I’m also hoping to get some feedback from the farms themselves and to give them a chance to influence how the next set of tests get run. Blender’s come a long way since the first set of tests and I think some things could be updated with respect to my methodology to improve confidence in the tests.

A few open questions are:

If all goes well this next set of benchmarks will be released as a publicly available dataset that can be used by render farm comparison websites like Radarrender going forward. It will also be based on a new database / version control tool / api generator that I’ve been working on so it should at least be an upgrade to using a Google Sheet for everything.

We have just upgraded (again) the GPUs for RenderStreet. If the initial comparison sheet is still used, it will need an update with the new numbers.

Concierge would love to be put to the test! Check us out at https://www.conciergerender.com/

You can redeem $5 worth of free credits by verifying your phone number on your account page.

Btw, I’m pretty sure the folks behind the Radarrender are from iRender render farm or are affiliated with them. The results of their comparisons are always biased towards iRender on the website and on their YouTube. I’ve seen some of their tests they’ve done to compare different farms and to me they aren’t objective nor conclusive but somehow always favor that one farm.

I would do a thorough research first before partnering up.

I’m not saying this to hate on anyone. I’ve seen your work on comparing farms and in my opinion it’s done the right way and it’s fair.