Blender to After Effects

OK now, for the position ig gaves 3 numbers like this:

and so on, what does x, y, z pixels mean? just coords or something else?

also, what coordinate system After Effects use? Y for Up I guess?

hi
I have not used ae in a while but i am sure that if ae version is one where is tracking you can figure a way to get camera data transferred by tracking footage/rendersequence where cam is replaced by white distinctive solor dot/circle or cube and so on…
Depth can be done too with few tricks, with tracking and hmm. the system of linking numeric data and equations from x or y to z of cam.

ZanQdo, x, y, z would be the camera coordinates(I would assume), AE uses Y as Up. I don’t know if it would help at all but you can download the After Effects SDK from adobe.com. thanks for undertaking this project, I for one greatly appreciate it.
_peace

First, what does this means, its located in the header:

Second, why isn’t there scale keys in the motion file I got?

Please if anyone can make more demo files, I want to look at other exported files, maybe from different exporters.

The script is really easy to make, it’s just the fact that this is not documented at all that makes me go slow :mad:

hiya Daniel, those things refer to the ratio between the widths and heights of the pixels and the width and height of the frame as it should appear in actuality, these are things that the compositor (person) should be able to deal with themselves, as i dont think the data gets passed over to after effects directly anyway. scale keys are not commonly used on cameras

Hey ZanQdo,
What kinda of demo files would you like? Let me know and I’ll try and scroung them up for you this weekend. peace

Thanks, I thought this thing could be used for exporting any objects motion, that’s why I asked about scale keys.

About the aspect ratio, I’m using a fixed number right now, 1.4222 but I could change it later.

please send more example files, I mean exported camera motion files from other programs that allready have exporters to it

I should be able to export you some C4D camera files this weekend, if I don’t get side tracked.

I’m very new to both blender and AE, so I hope this statement isn’t too stupid.
AE7 will import OpenExr data now, and it appears 2.42 will export it. Would that be a solution?

I’m very interested about a possibly integration between Blender and AE. BTW Voodoo Camera Tracker is able to export blender .py script scene as well as .ma script, maybe someone can contact them to get some help.

Oh sorry I had no time last weeks but I got enought example files now, be back in a few days

Woh nice one ZanQdo! If you’ve got the spear time could you make a Maya camera curve importer (since you already know what your doing)?

News is I’m still very busy, if someone else would like to do it for me go ahead, if not I’ll do it when I got time :o

I don’t think that blender can replace After FX by itself, but there are cheap or free apps which together can acheive most of the functionality.

I also dispute that After FX is any industry standard compositor. Adobe beat it up alot, and it has got alot better than it was (espcecially V7), and I also think that it is the best adobe app out there.

Combustion is cheaper, has a pseude-node interface and builds on the technology of the best compositors in existence (flame etc…). And now, shake is only $500usd I think alot of mac users will dump afx and change to it. Plus, ALL of the colour tools, keying tools and most of the other correction fiolters can be done with blenders nodes, and the morphing, editing, masking and 3D compositing can be done with Wax, both of which are free.

However, Maya IS industry standard (this is not disputable), and all the above compositing apps can access maya camera and animation data in the form of a maya ascii. This format is Totally open, can be written with notepad if need be, and documentation is everywhere.

I have a supreme interest in Blender as a high-level VFX tool, which it so nearly is…
DT

Again, depends on your industry. The small/medium sized production houses, After Effects is the standard. Just like Maya has become the defacto standard for rendering for film. In the broadcast (TV) arena, there are still a lot of Lightwave users. TV has been an industry that newtek as been dominate in for the last decade. I can make the arguement that lightwave is still one of the few packages that can do broadcast level work out of the box. Maya and Max, you still need to use other rendering engines to get the best results.

Shake is primarily a composting application. You can do VFX, but shake also imports AE files for use in a project. Just like After Effects can do compositing, but I think of it more as a VFX package.

Frankly, for my personal work I’m using Effects Lab pro from FXhome. $150 and very easy to use and geared towards the special effects I’m doing.

Hey this is magnificent! Finally found one of these rare threads about importing camera data from Blender to a post-production software, namely AE in this case.

ZanQdo, if you manage to create a some sort of RPF-exporter or something, I’ll definently send you a bucket of flowers! (I’ll pay the shipping!)

Keep us posted and good luck!

Wow… as I said in CGTalk, it’s something I’d be more than interested in. If I had time and I knew python, I’d help myself. But since I don’t have the time and knowledge, all I can give is my moral support.

Any updates on this? I too would love to see the ability to share camera data between AE and Blender. I’d use it every day in my work.
-Trev

Well I can always finish this thing but I need answers for my questions, I don´t use after effects so I really don´t know what is what, this for example:

Should I just had code this in the script or use some input from blender?

ZanQdo, here’s a screenshot of the comp settings in AE…

i’d think you’d need to have the script take into consideration the composition’s pixel aspect ratio (as well as frame rate) and convert to square pixels (Blender’s output). Don’t know if the source’s PAR would make a difference as AE manages that in the composition as well as in the project settings. let me know if you need further information. 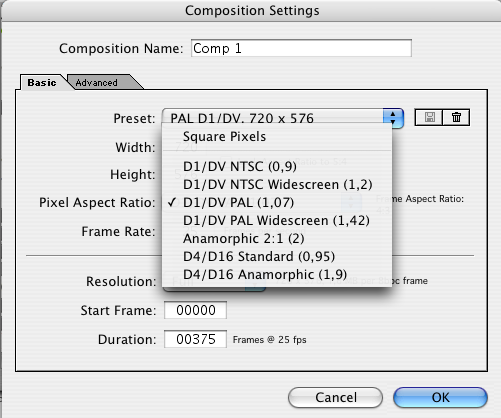