This information is not widely known in Blender circles (and beyond), even though the news is ‘old’ (2016/17). Even in medical texts this organ is sadly often still missing or incorrectly described. The shape of this organ was only anatomically correctly depicted for the first time in 1981!

From the Fab Lab web page (translated from French):

[The purpose of this research is the] Creation of a full-size 3D model of the female sexual organ, i.e. the cavernous bodies making up the clitoris and the accompanying spongy bodies (“bulbs of the vestibule”). The whole has the same embryological origin as the penis, functions in exactly the same way (its congestion is the main component of sexual arousal) and plays the same role in sexual pleasure.

The idea came about in the context of preparing videos dealing in a non-sexist way with the themes of the SVT curriculum concerning sex and sexuality. In school textbooks, the clitoris is often ignored, and is systematically misrepresented when it is. The aim was to show what it looks like in concrete terms in order to talk about the anatomical and physiological bases of sexual desire and pleasure, while not forgetting women for once. 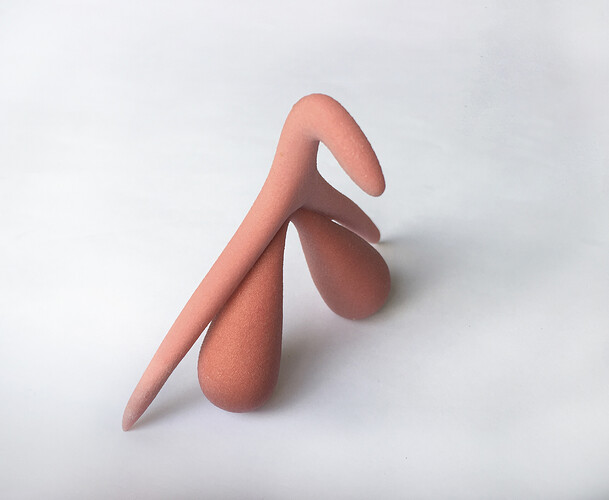 2553×2093 465 KB
The default size is a realistic average, i.e. about 10 cm long from the tip of the clitoral glans to the tip of one of its two roots. The body of the clitoris being bent, the total height of the object is about 7 cm.

The idea was to make something as realistic as possible, even though it was stylized. Indeed, the object was designed to be shown in a video made as part of a project supported by the French Ministry of Education. Filmed in April 2016, this video will be published on a website dedicated to educational materials respecting and promoting gender equality, which is due to be launched in January 2017 (⇒ https://odilefillod.wixsite.com/clitoris?lang=en).

First, we had to look for scientific articles giving precise information on the anatomy of this part of the body, which is infinitely less well documented than its male equivalent, and make a compromise between these sources, which are not always convergent, in order to define the average shape and size of a clitoris and its bulbs, and then make 2D drawings with the corresponding measurements.

From the 3D model, an stl file was generated.