I’m running into an issue while I’m modelling in blender.
I’m actually modelling Dinosaurs for a game with Multiresolution Modifier at max. 5.
But if I try to go further in the process, like giving textures, scales, placing an eye in it, making bones, my PC nearly crashes.
Its running on 99% RAM and mostly over 50% CPU or higher.

I tried to run blender instead of my CPU on CUDA but a difference I didn’t saw.
Also I searched for answer, but they all didn’t help, I don’t know what I can do now. 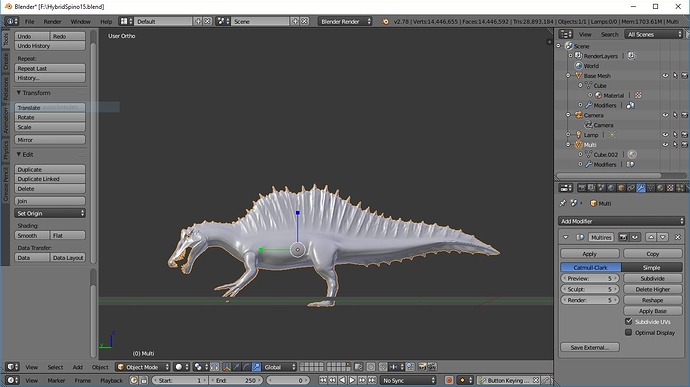 ^ depends on how many polys the base mesh has.

1 million verts is about 1 gig of ram roughly.

This here is a screen shot of my base mesh:

Is there any possibility or any way how I can finish this sculpture?

@burnin: you said something about seperate into parts. Is it possible to seperate this sculpture into part without loosing the sculpted?