I’ve been using Blender for years now and love it. Recently I’ve been using it primarily as a linear video editor and have been grappling with this issue.

The camera I use records audio at a low volume. I was wondering if there is any way to increase the overall volume of the final render without causing distortion. I have attempted to increase the volume of individual strips in the “Edit Strips” tab: 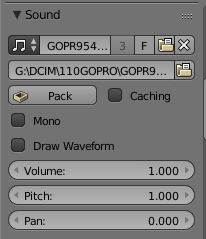 and after a certain point, which is nearly an unnoticeable level of increased volume, it causes distortion which increases proportionally with the increase in volume in the rendered video.

Is there any method for increasing the volume in blender without causing this distortion?

Bender is not a digital audio workstation or DAW. it has very limited sound manipulation tools. I’d suggest using something like Audacity to normalize your levels then try using the compressor to squash transient peaks while lifting background. Bear in mind that you won’t make bad audio better however.