Just wondered if anyone uses Vectorworks with this workflow? How good is Vectorworks and how well does it work with this addon? I use ChiefArchitect and import 3d models using DAE. It is flawless. ChiefArchitect has some of the best tutorials for a CAD program I have seen. Then I use an addon from the Blendermarket and cleanup my mesh and alot ofthe triangles. https://blendermarket.com/products/bmesh-clean-add-on Just thought I would post this here because some CAD programs don’t have IFC export or Open BIM.

Excellent work with this addon. So many new features so little time…

@Zawardo is this what you’re looking for?

@bkjernisted Vectorworks seems to support IFC export. I’m not sure about ChiefArchitect. This add-on focuses on OpenBIM, so unfortunately I’m not quite sure how to support other workflows. You are free to import basic geometry and then provide OpenBIM structure to it afterwards.

ty, but when i importing the file dont import correctly all rebar(green rebar). @Zawardo The bug for that was fixed 8 days ago, but didn’t make it in time for the release. It should be available in the next release.

For rebar, however, it is usually advised to import using native representations, as otherwise rebar becomes unnecessarily heavy. Enable this option prior to importing. This will provide a much faster import for rebar: Its normal if in Open ifc viewer dont visualize the objects element names?
I Found another problem. if I export same ifc file, dont import the rebar(curve objects), but I need to change in mesh objects. How to solve this?

Hi there!
Can someone help me with Documentation Export in the latest version of Blender BIM?
I watched the tutorial on Peertube concerning this over and over again, but i can’t get it working, because a lot of the functions seem to have changed in the last months.
I just can’t figure out, how to draw the object.
However, dimensions show up in the drawing, but without border marks, just as a line with the according length.
Thanks for the work on this great extension for Blender anyway,

I had the same issue with documentation. The interface changed so the previous tutorials don’t seem to apply anymore.

@Zawardo sorry, I don’t quite understand your question. What are you trying to do? As for the missing object element name, that depends on how the other IFC viewer works. The name should be correctly stored in the resulting IFC file.

@johannes.wilde and @Ector3 - the features in documentation have moved quite quickly recently, so unfortunately the old videos no longer apply. If you’d like, come onto http://webchat.freenode.net/##architect and catch me online during Sydney daytime so I can live-chat with you and help resolve your issues.

I plan to do another release this weekend, and I will do an updated recording regarding the documentation capabilities. Wow, thank you for this amazing addon. 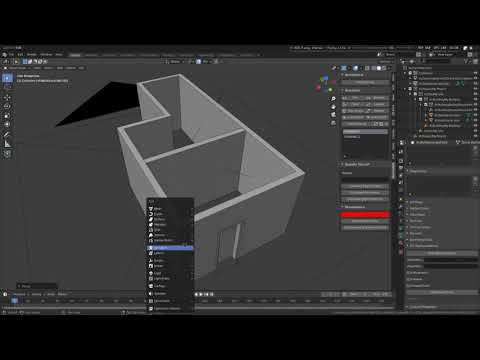 I can’t say because of excitement. Thank you

You guys have brought blender to an entirely new level. Not a tutorial, but an example of badassery. The workflow now just makes complete sense and the results look so professional . Thank you noidtluom for sharing this.

Thank you so much, Dion.

Don’t have words…only tears of joy

Hey guys I was able to finally see first hand the quality results blenderbim produces. I kept getting error at the time of create drawing until I found that the measureit arch addon must have a conflict with it. Blenderbim works great as soon as I disable it. Thank you for sharing this awesome addon

I tried to install BlenderBIM in Blender 2.9.1 but it doesn’t work.
Can you tell me when you think BlenderBIM is ready for 2.9?
Very gratefull for your add-on, used it lots of times
Thanks Hey @Foppe3D it looks as though the installation was not done cleanly. Perhaps due to a manual copying of the add-ons folder or otherwise. Send me a message on webchat.freenode.net/##architect and let’s screenshare and I can help you debug it!

I create an project with blender and blenderbim and want to export to an .ifc.

But the export doesnt work at this project.
Maybe to much objects or faces? Have any idea whats wrong?