Since I’ve missed Andrew’s competition I’m most definitely joining this one. I love robots.

For this time my goal is to create a not very big (aka human scale or slightly bigger) humanoid bot. This bot could be in a universe like deus ex, like a police bot or vice versa some sort of a thief (aka bad guy) but it’s final role haven’t been set yet.

On the concept, I do like the overall shape and some areas particularly it’s belly, arms (from shoulder to wrist), upper leg with middle joint. I’m not satisfied completely with head as well as with hands (thinking that one arm plasma/energy type weapon will work.) and shoulder joint area + lower leg. But I think I’ll leave this place to figure out while modeling (that’s always part of fun).

Anyways with a first year in the university starting on September 2 I hope I’ll have enough time to finish this.

P.S. I’ll try to think about ergonomics more; after watching 3d palace vid but it only makes everything harder 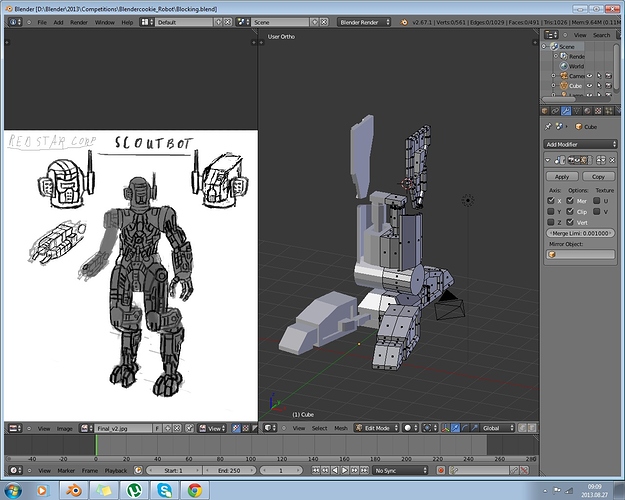 Seems like you have a nice detailed start. Good luck with this.

I’m also going to try and take part in the comp.

A little tip:Start with the basic parts of your robot like the frame and turning joints while keeping in mind where you are going to add important parts like pistons and springs.Pistons,springs and pipes can be modeled later.It’s also easier to model them later because the frame you modeled already gives you an idea on where the detailed parts should be put and how to model them.

Thanks! Actually yeah that should become part of my workflow, so called “blocking stage” But I always find myself starting to add details too early like now. Will try too keep this in mind.

Very slowly progressing. Don’t worry, I have the blockout mesh on separate layer but I still find that this way of modeling is easier for me. 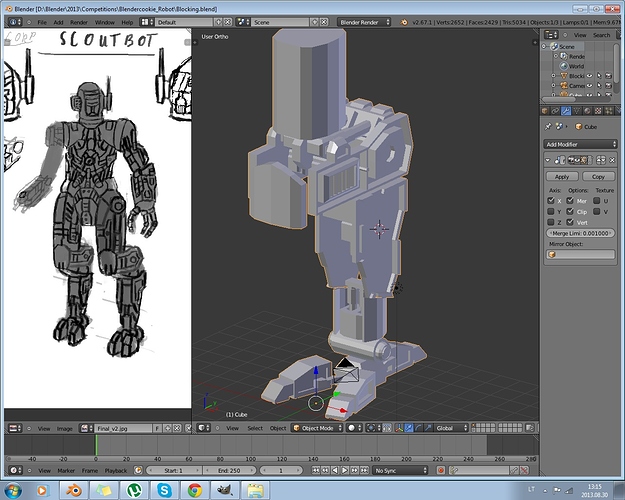 I’m going for a similar leg style,this might give you some inspiration.

Not sure if the image will show:

Hey, it’s not showing up. If it’s from web you can simply paste a link here. Thanks anyways

Hey, it’s not showing up. If it’s from web you can simply paste a link here. Thanks anyways

Awww, that’s awesome :D, goes to my inspiration folder right away :), Btw happy accident cuz i also thought about composition with gun pointing to camera (my bots’ hand cannon). Might rethink that though.

I did not have lots of time to work on this because of the move to capital city and other stuff, but now I’ll try to focus a bit more on this since university still allows that pleasure :). Btw I think I’m basically done with the lower feet and mid joint (unless I’ll think off extra details). Feedback is welcome. 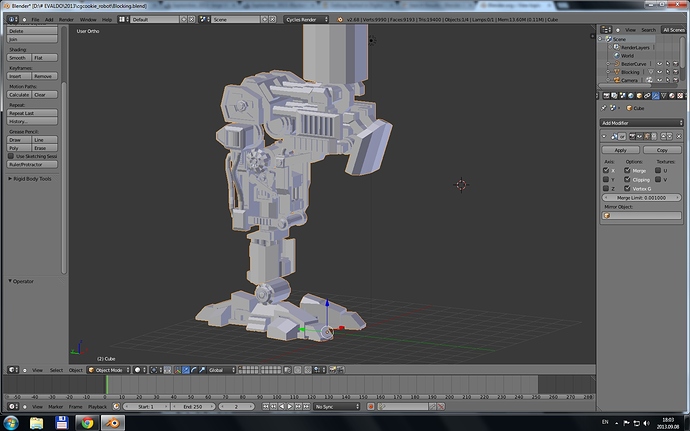 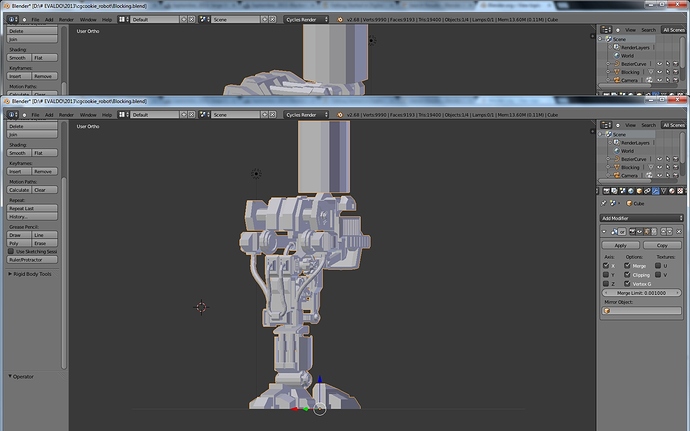 Going slowly… and don’t have the subd modifier yet. Hope I’ll be able to finish in time. 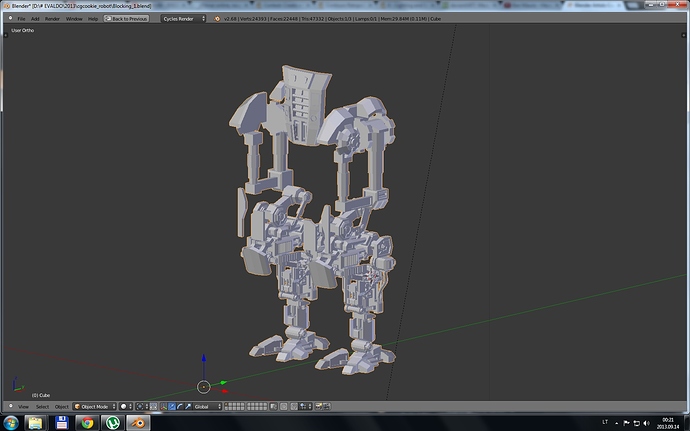 Yet again a bit of progress. Will try to model as much as possible during this weekend. 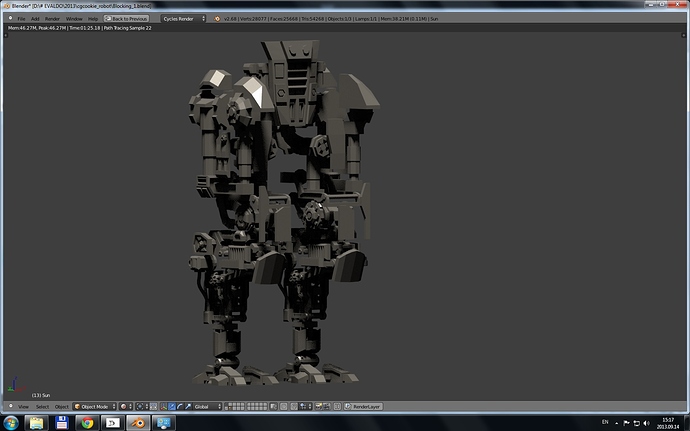 No, really, that’s exactly what I should do :). Cya later. 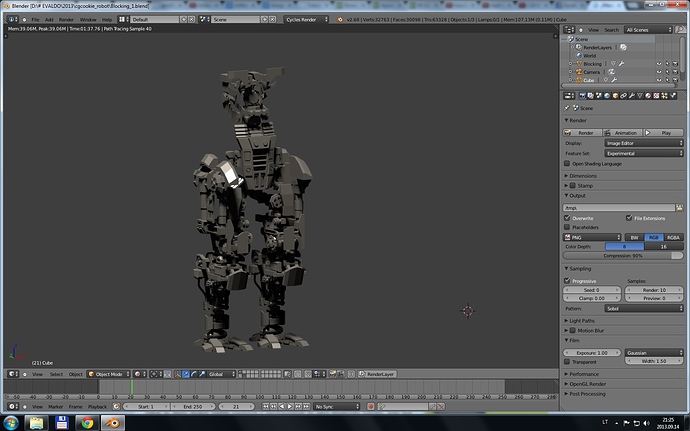 very cool, though! Loving the detail.

(I know what you mean about slow. My pace is glacial…)

Thanks! I have to finish modeling within this week and leave the last week for texturing rendering. I’m taking my time because it’s hard to figure out working details… 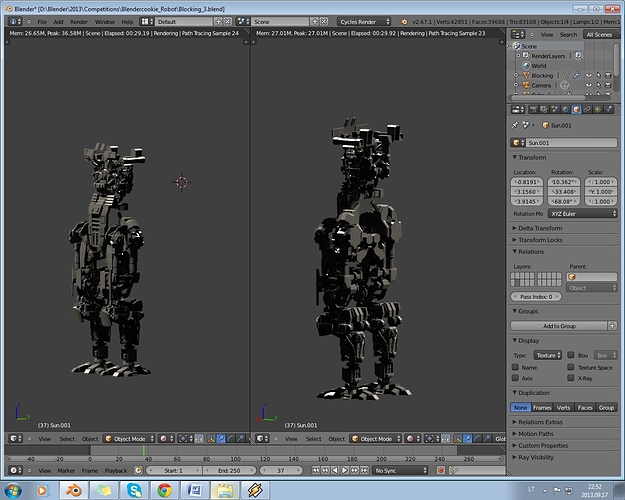 While the amount of detail is really interesting, it looks as if the machine is lacking a well defined form that is very much present in the concept sketch. The clearly anthropomorphic shape of the sketch is getting a bit muddled - it looks like a heap of machinery parts. Please work on getting the form right and you will have an amazing robot.

By the way, am i allowed to leave feedback here? Since i’m competing for the same prize as well, am i not likely to have a vested interest in your work not turning out well? Think about it.

Didn’t have the internet for a few weeks so couldn’t update this. Comments here Are welcome and especially constructive criticism like yours :). As far as I understood you were talking about the general silhouette? I hope I did fix it then.

I still need to do quite a lot of job and hope to finish modeling till weekend.

This is probably the camera angle that I’m going to use. Also I already have an Idea for enviro. Now back to work quickly… 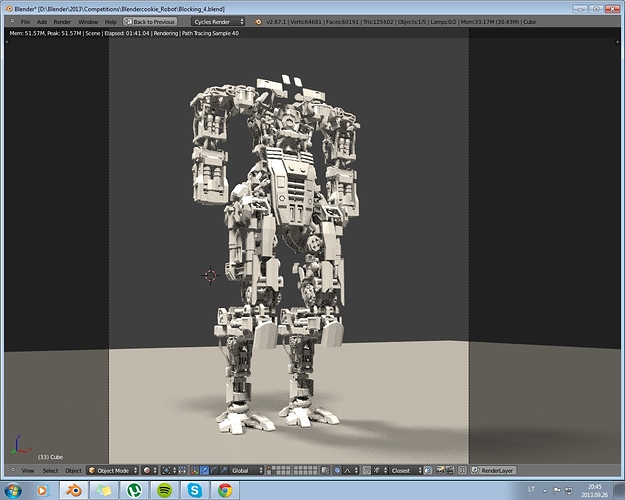 P.S. Even tho I’ve already seen some very similar ideas on bc site… Seems like saying that there’s nothing new in da world is correct… as well as “if you’re not going to do it someone else will”. I’ll keep tryin tho. cya.
.

Unfortunatelly I had to finish this piece on a very low pc, so this definitely does not represent my final idea as well as skillset. But since I can not miss the deadine I’m uploading this to the contest site… 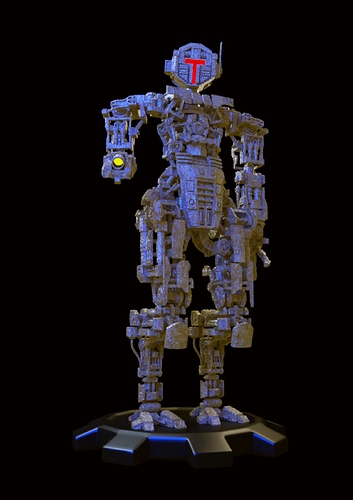