I’m basically done with this one, so I’m bumping it up from WIP for focused critique. Any constructive comments will be appreciated. 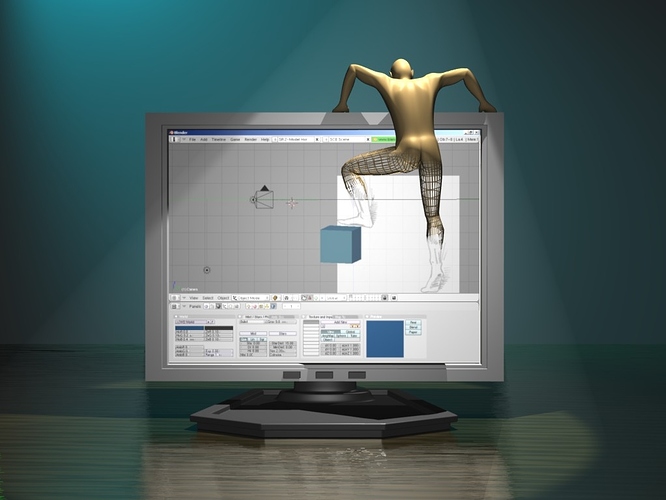 ! i love this.definetly gallery and 5 stars from me!Just one thing.Can you maybe add a surrounding.Like maybe some objectssuch as a mouse,keyboard vas books e.t.c. Maybe setup up some books and make it look liike some stairs!:rolleyes:
Good work!

I would say that edges are a bit too sharp on the monitor and a color of plastic could be a little better. Reflection on the desk is kinda strange like it is on water.

Otherwise picture is very good, 4 stars from me!!!

at the base of the monitor, on the floor, there are some white dots. I think they look kinda weird and out of place. Anyway, I’d give it a 4.5/5

First off, nice concept really! Original. I like it!

Since this is the focused critique forum:

Work on! It’s a nice concept, so make sure to give it a nice look as well. There’s plenty
to do! Looking forward to seeing what you make of it!

I’m curous how you did the material on the feet (white with outlines) Did you “paint” (assign) black material to the vertex edges in that area?

Mike_S: To me it looks very much like it’s a drawing assigned as background in Blender. Doesn’t
at all look like anything Blender could produce (but a nice bit of drawing).

Thanks so far guys!

Yes, the man is supposed to come to life from a Blender “scanned pencil background” (which I really did draw and scanned in), turns into a wireframe and eventually becomes a living, rendered model. The tricky part was to align everything. I’m trying to make it look like his drawn feet are stepping on the Blender bar and cube to help him get out of the screen.

M.h.p.e.: Re the windows bar - mine auto-hides to maximize my screen area, that’s why it doesn’t show. Anyway, it’s about Blender!

Although I did not try to model an exact copy, I have an Acer LCD monitor that kind-of looks the one I did - especially the foot piece (the buttons and screen frame are not quite the same) - see http://www.acer.co.jp/images/monitore/AL1923/al1923_1.jpg. I did not want details to detract from the focus of the man. Even if I add a keyboard, etc, I’ll probably add DOF so that they will be slightly out of focus, with the man in focus.

I’ll make work of the other comments from all.

The Mhpe really covered much of what I was going to say, but I’m going to mention it anyway just to reinforce the fact that you should look into these things

-Better lighting, instead of a spotlight use an area light, and possibly add AO
-Bevel the monitor edges, try to create a more fluid base for it. refernce a samsung design or a dell design for professional done “fluid” and “solid” type bases. Also add more detail to the buttons. Most monitors have more than 3.
-Improve the materials
-The man could use more detail in his back, but in any case he doesnt really appear to be coming to life from the page. Still a cool idea, reminds of MC Escher’s drawing of two hands drawing one another. And improve his skin texture, maybe making the skin texture itself becoming more realistic as more of him comes out of the computer.

It would be cool to see if there were more of his people inside the screen, either looking onwards in awe or banging on the screen of the monitor also trying to get out…hehe thats just an idea you can take it or leave it.

Nice work. All critiques already mentioned.
Looking for the next version

I want to post an update, but I seem to have run into a “snag”: the (non-)lighting of the man up close to the screen. I wonder if anybody knows the cause?

I did the following:

Ignoring the imperfections of the model, here is a rough example, where I duplicated my BlenderMan and moved it further away from the screen (the one closest to the camera). The lighting on it is fine, but the lighting on the actual one in the back does not work. 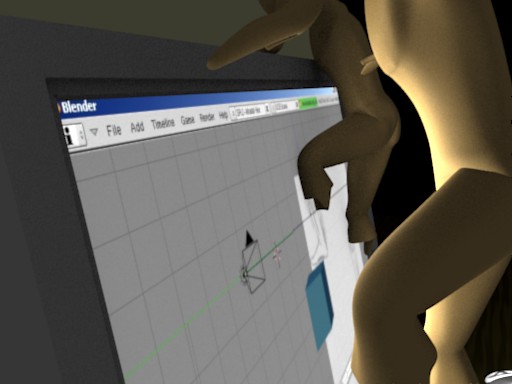 It is NOT due to the lighting grid being moved too far in front the screen (i.e. behind the man).

I then did a test, where I did the same set-up, but in a simpler scene. I obtained the following results: 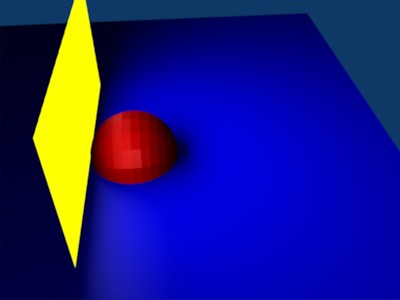 See the dark area on the ball very close to the screen? .(Again: it is not due to the grid being too far from the screen. It is JUST SLIGHTLY in front of the screen - not noticeable on this scale) …And this was after I also heavily subdivided the grid so that there are MANY lamps - because I thought it may be due to the distance between the lamps.

As you can see, there is an area close to the red ball that does not want to illuminate. Does anybody have an idea why that could be?

The lamp’s relevant specs are as follows:

I’ve now confirmed through testing: the above problem is a Blender rendering issue, but - having said that - Yafray also seems to not work when using a rectangular area light. Yafray’s square area light seems fine, which helped to improve the lighting from the screen onto the man’s body.

So, here is a Yafray teaser in the mean time (it’s still a WIP):

As you can see, I completely changed the mood of the scene. This is NOT the final, but feel free to comment on it so far.

Questions from my side:

Screen is way too bright! I can barely see the drawing of his legs. Tone it down a bit.

Would radiosity solve the problem of the screen blocking light?

Here is another quick update: I dimmed the screen a bit an raised the AO/Global Illumination. I still need to address the rest of the issues I mention above. 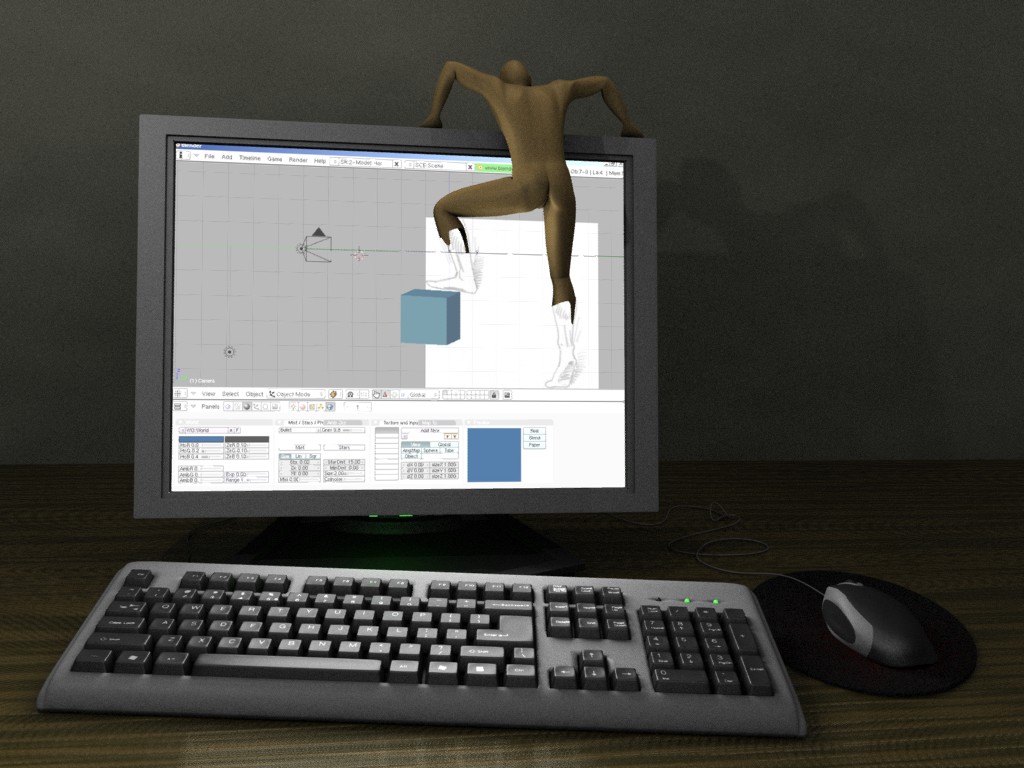 Well, I like the new scene better what with the mouse and keyboard. Global illumination is a good idea but will need higher samples for the final rendering to reduce the graininess. As for increasing it’s power, you could also change the Gamma slider for the world settings (or possibly in render settings) to fix the darkness while retaining contrast.

As for transitioning from the paper to the wireframe, what you could do is add a lattice and then shape it so that his legs are pancake-thin at the bottom. Also, you might want to add a blend texture that starts white at the bottom and progresses to his skin material as it goes up his legs. And do the opposite for a more realistic skin texture from the top. That would look awesome!

Looks good. For going from drawing to wireframe, I would just do that in Gimp or Photoshop. Key board + mouse look awesome, so I think you should put that much effort into the monitor as well.

Here is a version where the surroundings are a bit brighter and the screen is not over-saturated anymore.

I’m going to tackle the wooden texture next. 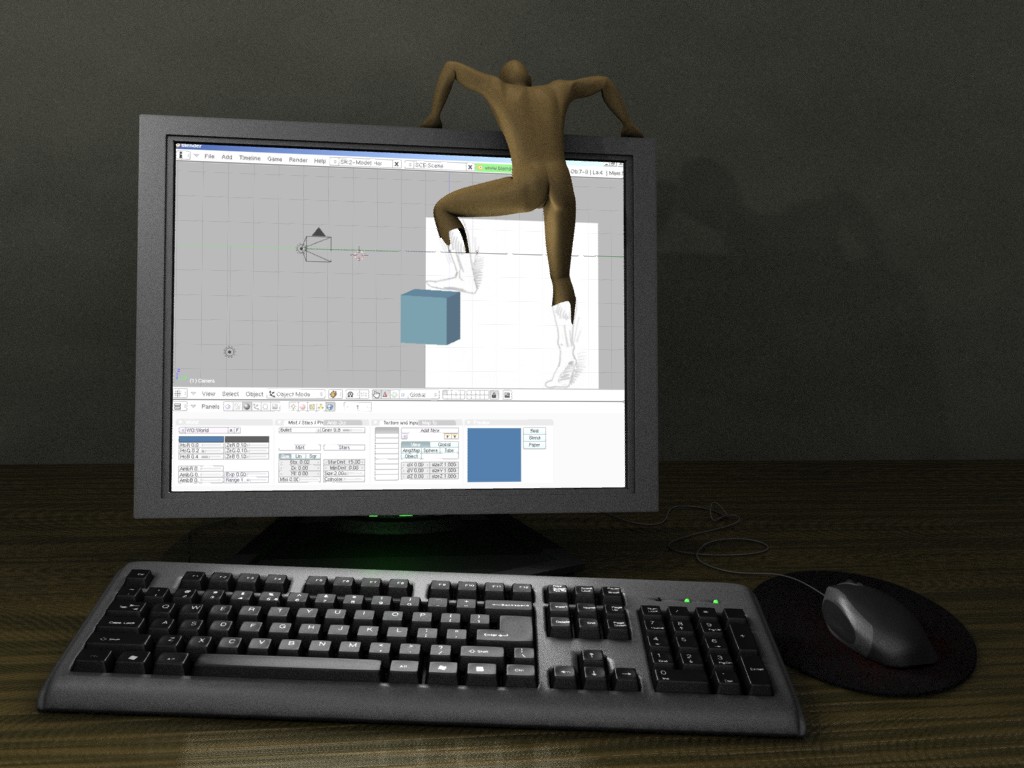 BTW, I also attach the ball scene as done in Yafray - for comparison with the Blender version. Notice how the area on the ball close to the screen seems to be better lit - and the slight darkness can probably be ascribed to the angle of reflection : 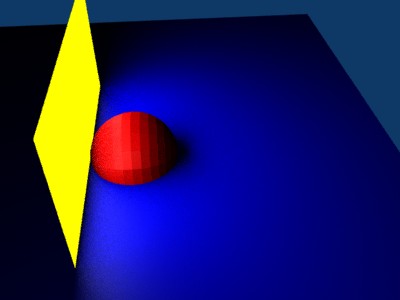 Comments on the work so far?

Just when you thought I had dumped the BlenderMan…

I took so long because I ran into all kinds of snags (and learnt a lot in the process).

…and I took it one step further with DoF, which turned out as follows: 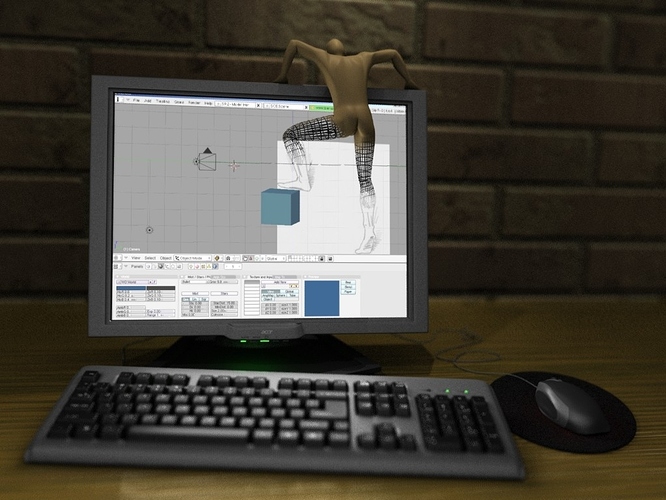 I think I prefer the latter, as it does not let the environment distract too much attention from the man.

The DoF rendering takes quite a while, as I did 5 AA passes with 4 samples per pass (total=5X4=20). It took 3 hours to render. I can possible play more with other Yafray GI settings…

Thanks for everybody’s comments so far! I learnt a lot in implementing them.