Congrats Vicky, and thank you!

You guys are all awesome. Ok so if anyone has any ideas they would like to through at my next renders let me know I’m always looking for inspiration! Ill have another one up soon!

Thanks! I also have to say that I too like the saturated color version of post #10, and although I have the highest respect for Andrew Price, you don’t have to listen to EVERY freaking thing he says

Haha yes Andrew is very good at what he does. I am simply using tips and tricks I’ve learned from him and a lot of others… Alright so as seeing as y’all would like a tutorial then a tutorial you shall get! I will submit it to blendernation when it’s done and I will also let you guys know when it’s done on here. Vicky do u have any requests for something you would like to see in the next blend I’m working on?

Nope, do your thing!

As a fellow low poly modeller I’m looking forward to see what kind of tutorial you can make.

Thanks for the support guys!..and gals

. I get off work in an hour or so and I will get started on the tutorial

Ok which of my renders would everyone like to have a tutorial on?

Ok which of my renders would everyone like to have a tutorial on?

Alright that i can do…cause i was sitting there trying to come up with a really complex new render for the tutorial and it was starting to make my head hurt haha.

Im getting the video uploaded now. It will be tomorrow afternoon before i have it up. In the mean time here is a sneak peak at what the tutorial is gonna teach you!

Hope everyone enjoys it when its finally up! 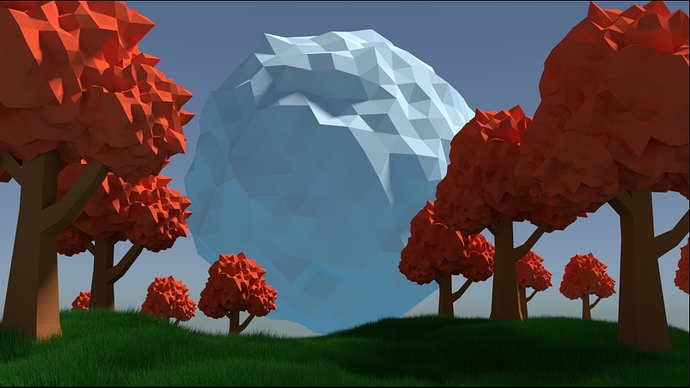 Looks like a nice render, but it could use some more vivid colours.
Also, the soft grass does not go well with the “edgy” low poly things.

I actually like the contrast of the low and high poly. Well done.

@TheNewGuy, I agree it could use some more vivid colors. Im leaving the color choice to the viewers of the tutorial and giving them the freedom to work with the scene how they would like to. Im just giving an overall of how i create my scenes and the process i go through. As far as the high poly grass…some like it some don’t I’m leaving it to preference cause i like the contrast between the two.

Also if i start to drag on in the video you can alway mute haha. It was 2 a.m. When i did the tutorial cause thats my only free time!

Decided to step back and do a texturing exercise! Turned out pretty good actually 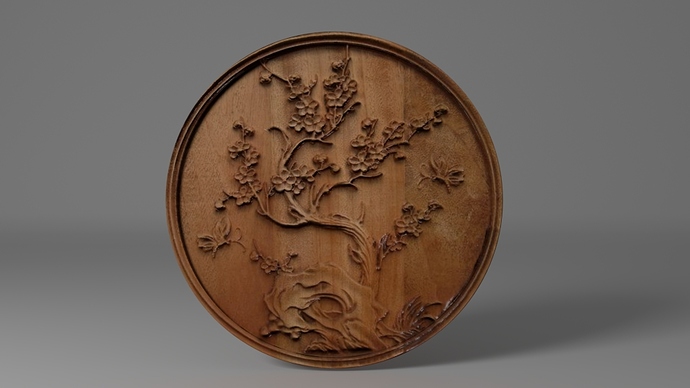 Heres a quick little video showing how i did the wood carving exercise!

What I love BI for is its possibility to cheat yourself to a good-looking result, with some material nodes, a reflection map just added on top without having to go through all this ray-tracing stuff. Personally I don’t prefer any of the render engines, there are jsut cases where one works better than the other IMO.
Sweet low-polycious work around here, give us more, please!

@Suboptimal I plan on it. IF anyone has any ideas for a render let me know. Im always looking for inspiration!

@Vicky, Hahaha i honestly haven’t used BI to render a scene in so long i forgot how hahah, or at least it would come out looking like crap haha i prefer cycles.