You are right that tumbled views have simply not been considered as standard ones.

At the moment, we are losing the grid. Snapping increment based on zooming is no more possible.
I can understand that developers don’t want a rotated grid, after a view roll.

IMO, we should ask them to keep a grid, in ortho mode, when view was aligned on active element and transform orientation is View or a custom one corresponding to active element.

Ok, thanks for correction.
But i did not snarked at your post but to the inconsistency.

Lose where the view you had of the model

This is why user perspective camera needs an undo stack like in Maya.

I had a whole thing about hating on the outliner before, and although it’s improved somewhat, there are still basic things that drive you crazy…

Also, just ran into this change that I managed to forget about… it almost feels as if it was made to personally spite me…

Not being allowed to hold down shift before using gizmo

Seems this behavior was changed in 2.91/2? Now, you’re actually allowed to hold shift down before dragging a gizmo… but it does not have the same effect as holding down shift after you’ve start dragging the gizmo. In fact, it seemingly has no effect...

In my opinion Blender is a bit like a student project, which others use for work. Now, the student developer do want to do new stuff, things that stand out and be cool. UI, looks cool,job done.
However there are some mean bosses who force employees to use a very low cost software… and here is the problem. People who play with toys, do not think about work, 5hey have fun and if the fun ends, they do other things.
Now Blender has come a long way, but every time I run into a problem there is some hack for it.
The Outliner shows this very dramatically . Its not like in any other apps, because its basically a hack. How to save work on a layer manager, just combine layers and outliner.
How, do we instance groups, just instance layers. But layers have no transform? If they had, they would be groups… no time for renaming, just add an empty on instance to move them…etc.
Its in every corner of the software. Honestly to fix that, they would need to rewrite a lot. No tike for that, physic engine is more fun…

Yeah, there is also annoying split between object operators and collection operators:

I wanted to use similar shortcuts for both 3d viewport and outliner but object and collection operators being separate gets in the way. You could argue about isolate and local view not being the same thing but hierarchy should just work for both.

Also, just ran into this change that I managed to forget about… it almost feels as if it was made to personally spite me…

Besides, the gizmo is meant for mouse input, so here’s how they could have done the plane thing:

And they could even do the slow-rate-of-change thing for mouse input if they wanted to:

Besides, the gizmo is meant for mouse input, so here’s how they could have done the plane thing:

That is the way it is done in Blender. Blender has the same plane thingies.

Local View for objects - not possible to access from outliner

I’ve got 7 3d viewports in 2 blender windows. Which one should go into local view when I active it from the outliner?

I usually have 2 viewports (modelling one and small with camera view) so for me either biggest or last active one would works.

I like the interface! … you can configure it any which way you want!

When i was a new user though i did find it a bit frustrating to get my head around, and the fact that it was so different from many older youtube tutorials was also a bit of a butt-pain!

Jesus christ, I’ve been stuck using this one for far too long!

Well, then the shift change drives me even more crazy…

Jesus christ, I’ve been stuck using this one for far too long!

Is that the one that can do tralslation, rotate and scale all on one?
I tried that once and found it even worse than the normal gizmos.

Gizmos are just terrible crutches in general and should be avoided when possible, imo.

Only if they are poorly designed. If they are well designed, they can do awesome things, like this: 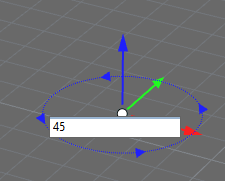 Anyway, I know there’s add-on developers who pick up the UI slack that the Blender developers don’t care about (and that’s why I support them instead of the devfund these days).

So, now back to the regularly scheduled venting!

Hmmm… Looks like grs plus 3d cursor only with gizmos.

Also, had to do an internet search for the following again, even though I get the horrible feeling that someone mentioned this to me very recently (perhaps even in this thread) because gee dog, we put a setting in your setting…

The above menu no longer shows up in my version of Blender… not sure why… so I had to go on the internet and search again and found a solution… it’s so illogical that this is another thing I probably have to do an internet search for every time I get stuck on it (and I will next time I get a new PC).

BONUS: You have to de-select this option for four or five different contexts of this shortcut, and if you expand all of those options first, and then de-select the option… they all collapse…

We need an addon that pulls the window bottom status line and the 3d viewport top status line contents out and into their own panel where each pice of info can be on its own line and you can customize the font size. I’d buy a 3rd monitor just to have that info panel visible and huge at all times

For the dissolve edges issue try “limited disolve” for situations like this.