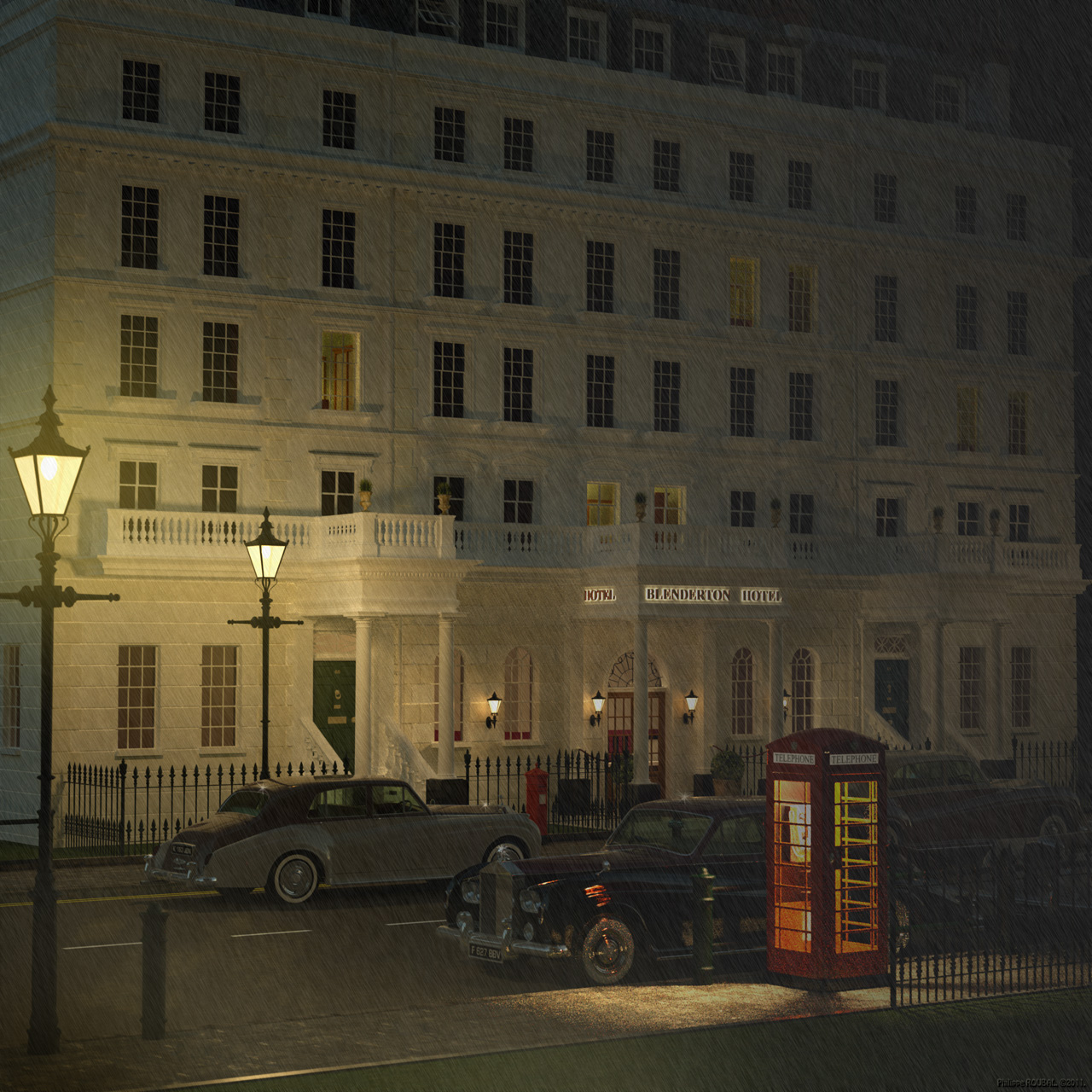 This is the very first image of my current project “Blenderton Hotel”.

Modelled in Blender, rendered in Octane, post prod (rain) in Photoshop Elements.
Currently, the scene weight in Octane is 1607MB !

As I like very much English cars as well as architectural styles, I started by modelling four very detailed cars : Rolls Royce Silver Cloud II 1959, Rolls Royce Phantom V 1960 and 1963 (The model in foreground is a model 1966, which is no more than a 1963 with chrome separations on top of the front lights), and a Bentley S2 1962, derivated from the Silver Cloud II.

I will show them better later when I will have added more buildings to allow more camera angles.

I wanted to build a very typical londonian scene in front of a Luxurious hotel,and I started the set with the street lights, the K6 phone boothe, and the Victorian letter box, and finally the hotel.

I’d want to model also a policeman to put in background, a black taxi, and a red bus.

…And maybe a doorman in purple/red and gold suit. 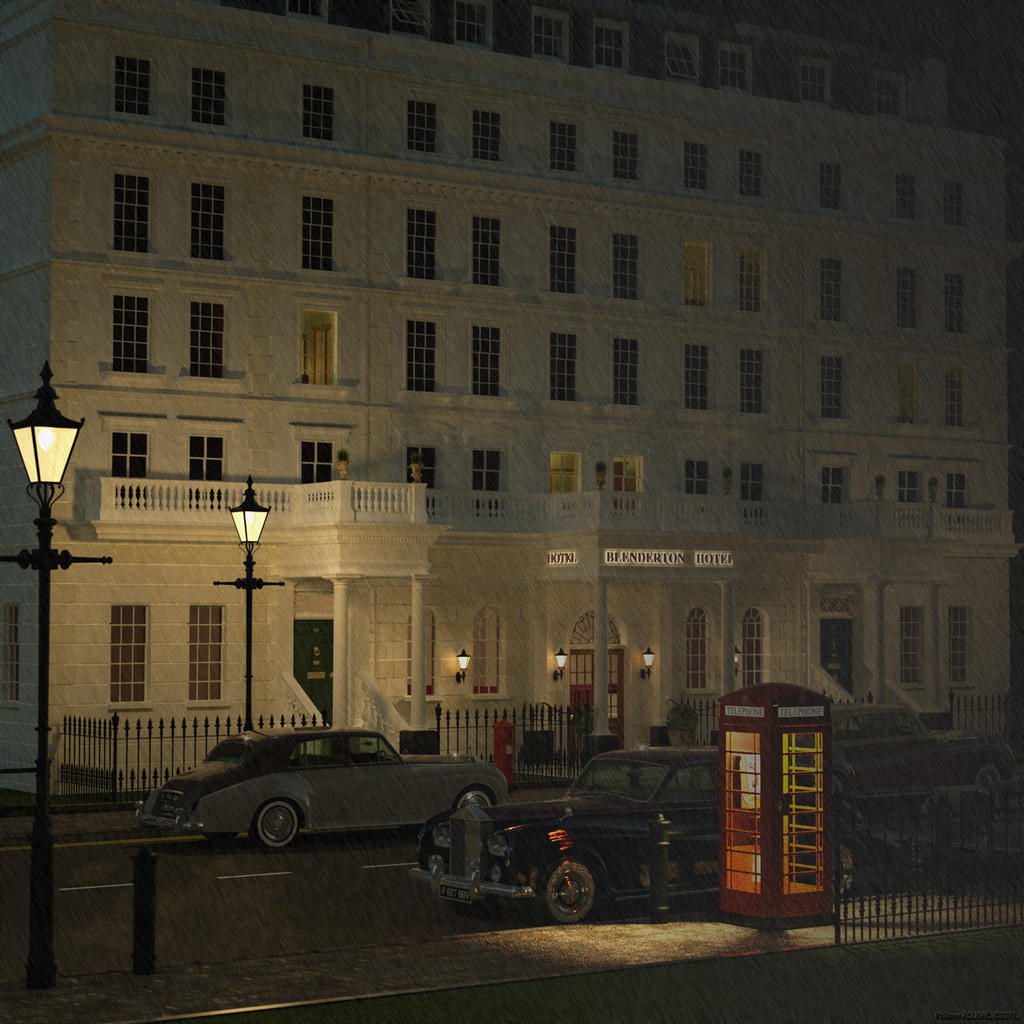 I have always enjoyed looking at your work, nice job again. I like the lighting as well. My only comment is that the rain looks like a layer added over the top of the image,( which you said it was), but there is no bluring as the distance increases.

Really nice. Maybe try out just a little bit more contrast though. I feel like this is a night scene and I’m seeing too much.
scene weight? Does that mean you’re using 1607 megs of vram for cuda?

I have updated the image with some glow around the two lanterns on the left.

Yes, this scene uses 1607 megs of VRAM on my GPUs. I have recently upgraded from two GTX 480 1.5GB to two GTX 580 3GB. It makes a huge difference : I can work without always wondering if I will be able to complete the scene. The dark side is that the loading requires huge RAM amount, and I don’t know if the 8GB on my motherboard will allow to manage the full 3GB of VRAM…

The scene is still rendering (17 hours…) I will let render until the maximum of samples per pixel (64000) and I will update the images again if there is a big difference.

I must say that every object is detailed and can be seen in close up, even the “Spirit of Ecstasy”(The Flying Lady) on front of the Rolls Royce. I modelled 3 versions of this statue, High/Medium/Low Poly, but currently, the high version is loaded on each Rolls royce car. Each stone pillar is High poly and subsurfaced… same for the iron fences… When Octane will support instances, I will be able to save hundreds of MB !

So how much geometry exactly is this? Do you know?

Those are pretty impressive vehicles from what I can see btw

For this cene, Octane displays 7 640 064 triangles ! I must say that almost all objects are in high poly, and I will decrease their resolution if I run out of memory. Sometimes it is hard to choose between geometry and texture weight. For example, the little modelled round trees in pots with displacement can be replaced by billboards with textures, but textures also have a weight… and sometimes it is not worth it. For these trees as the modelled trees have also a texture, I can reduce the weight by removing the geometry. I can also keep the geometry and use a procedural texture (no weight but less realistic in close up)…

Some of the rooms of the hotel also actually exist ! They are very low poly and use basic materials, but include some furnitures and lamps allowing to put some realism at night.

I will show the cars later in detail. I need at least to model a building on both side to allow wider angles view.

That is so impressive. Look forward to further updates.

Heh, my first thought when seeing the thread title was that it was a play on Blender’s name and would have a Blender logo somewhere on it.:spin:

How hot were your GPU’s running when the scene was being rendered, I heard of people comparing the later Nvidia GPU’s to space heaters, and how hot was the ambient air outside of your PC when it was done (since I hear that not a lot of homes in France or elsewhere in Europe have air conditioning units like here in the States)?

On some more practical critiques, I know it’s during a rainy night, but it wouldn’t hurt to have a little more contrast in the lighting.

Well, for the contrast, I have made several trials, but as it is supposed to take place in London, I want to keep some fog…

about the temperature, yes, it is very hot ! One GPU is at 69°C and the other one at 75°C. A big difference due to the fact that one card is blocking the air input for the second one !

The temperature in the room where is the computer raises of 4-5°C when the computer and the Cubix Xpander Pro 2 are running ! The cubix is a case hosting a big power unit (750W) and two graphic cards (two GTX 580 3GB). Currently the temperature of the room is 32°C ! As I have to shut the door because of the noise, it will probably increase during the night. I have set the temperature alarm at 83°C… I hope it will not ring when I sleep, because the sound is really loud and scary !

Heh, my first thought when seeing the thread title was that it was a play on Blender’s name and would have a Blender logo somewhere on it.

Just a joke about Blender and Ton, but no logo !o)

New image direct from Octane (except a small correction because of an error in positioning the cars horizontally : will be corrected in the blend file ) : 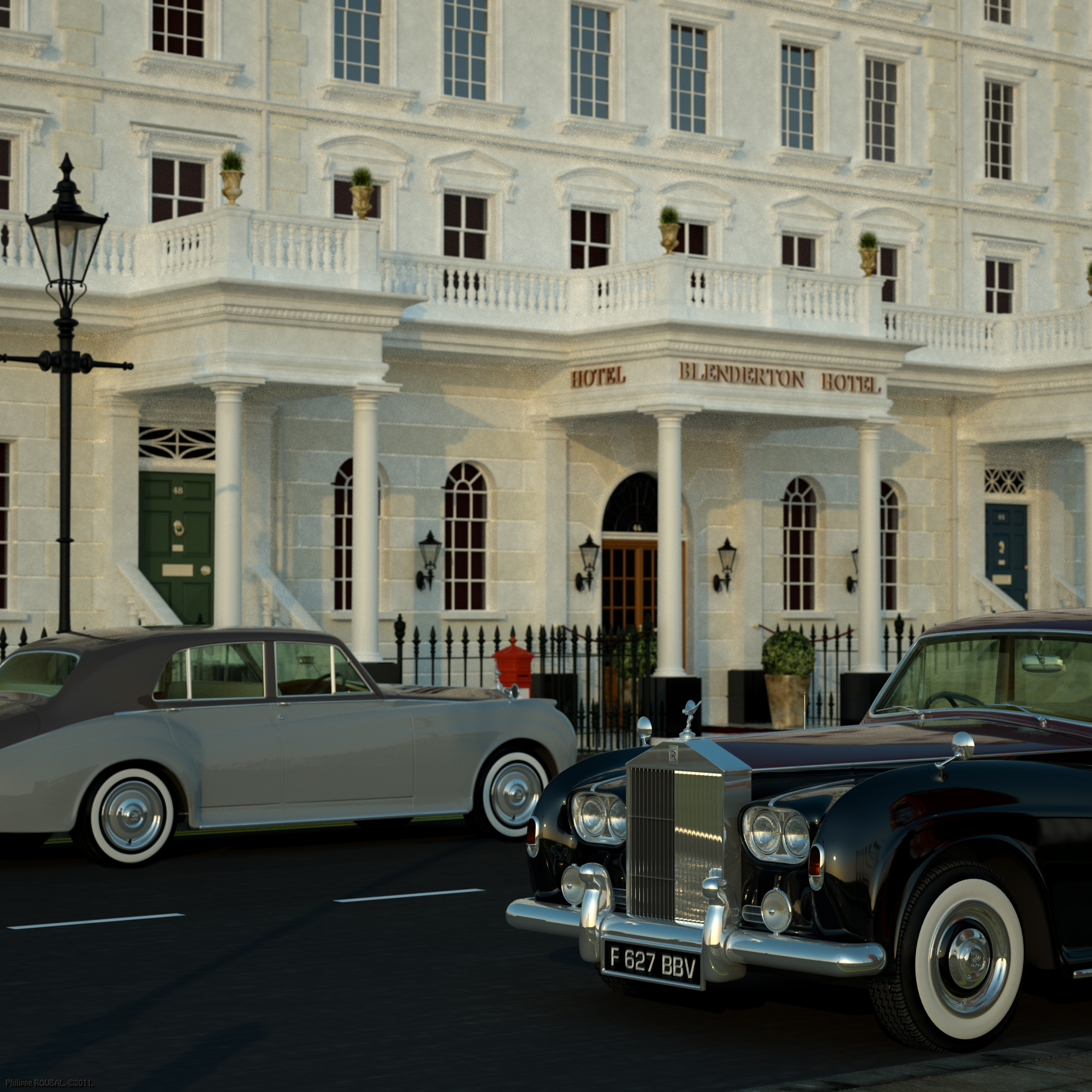 Just a bit of Poster filter : 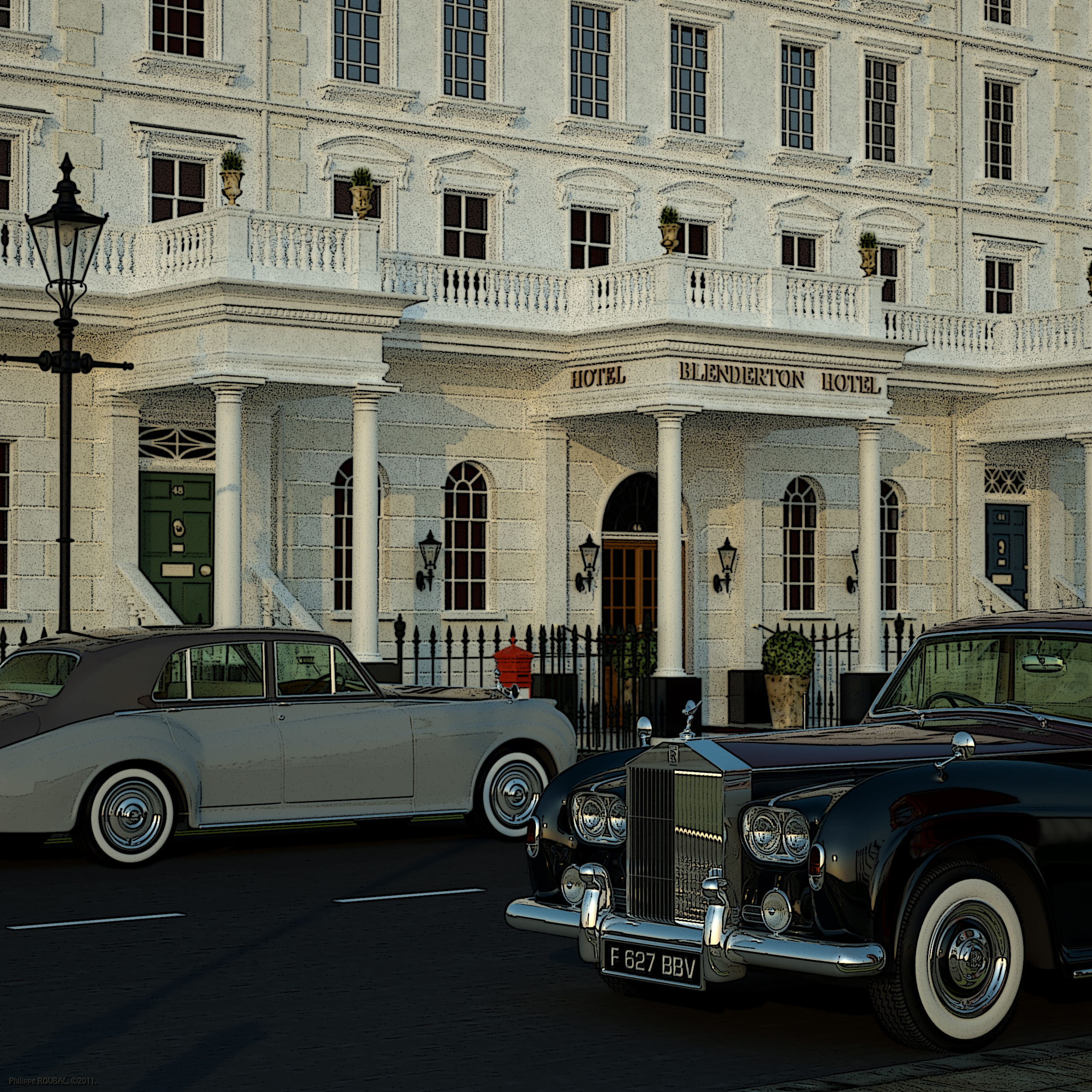 i think this looks more real than reality.

i think they gray car has something that makes it look unreal but for the rest …its amazing the black car looks so real its incredible o.0

@shotforce : I agree with you for the grey Silver Cloud II. I think that it catches only the uniform physical sky and so looks flat. On the opposite, the Phantom V 1966 receives some reflections from city props. That is one of the reason why I would like to model a larger scene with a building facing the hotel.

This past night, we had a big lightning storm at 2:40 and I had to stop the rendering and unplug all my machines.

A close up on the Front of the Rolls Royce Phantom V 1966. 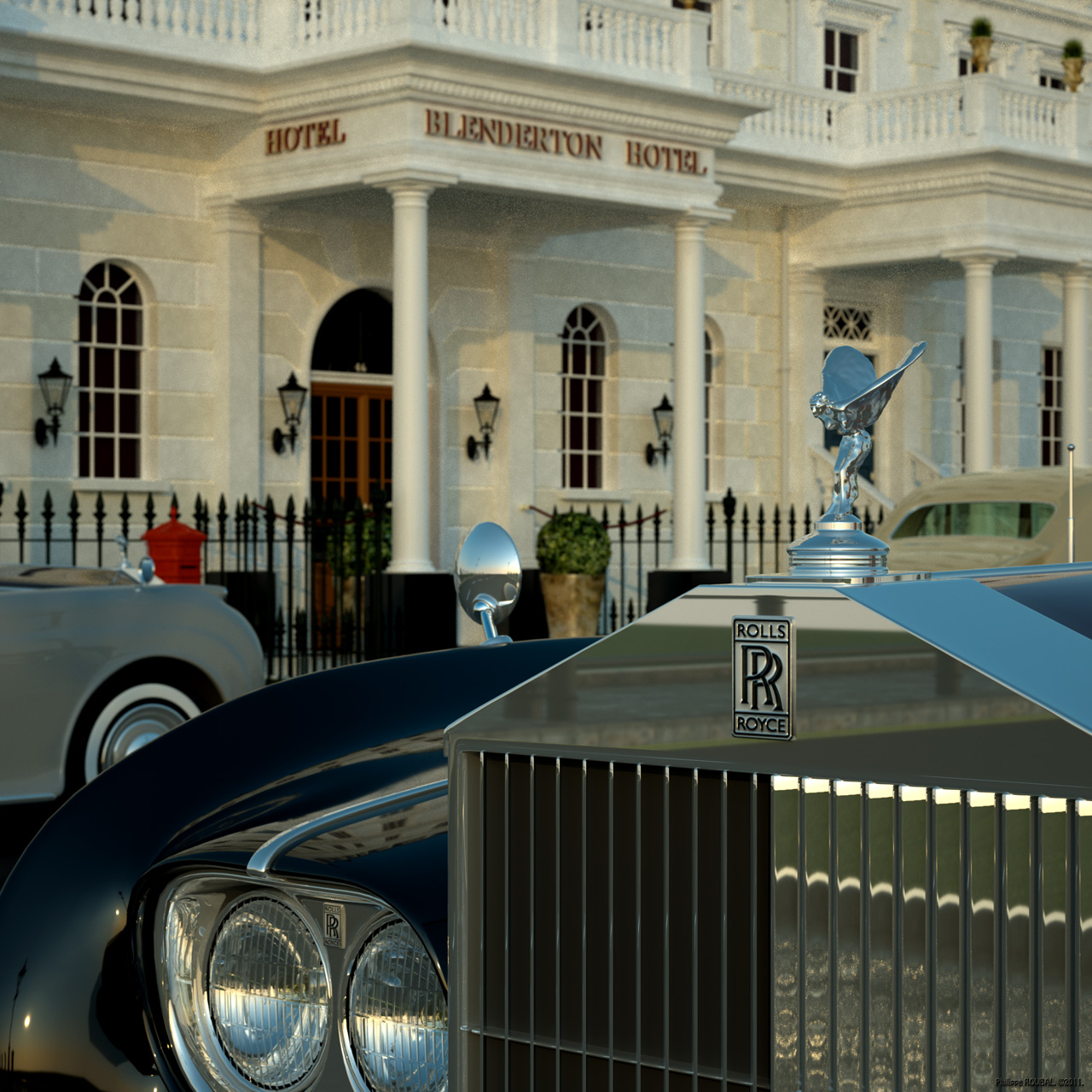 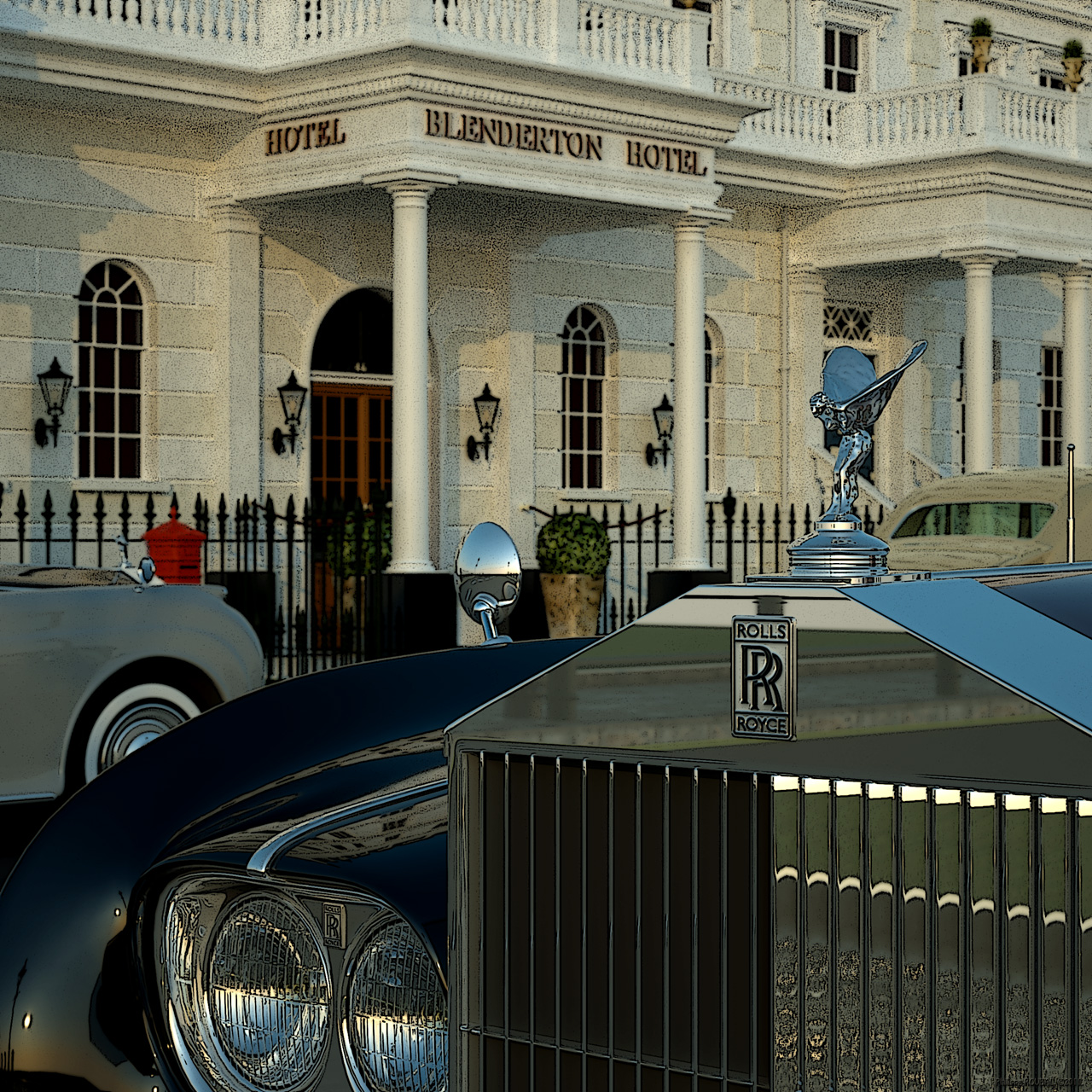 This past night, we had a big lightning storm at 2:40 and I had to stop the rendering and unplug all my machines. So, no new rendered image this morning.

I can see what you mean, we’ve had some whopper storms here with lighting and a lot of wind during the night and the electricity would go off briefly when my PC is rendering something.

However, now I have it hooked to a backup power source which allows it to either stay on during brief flickers or outages or keeps it powered long enough for me to turn it off properly.

Considering the fact that my region of the U.S has the geographical setup that favors violent weather more common and intense than perhaps all of Europe along with many other regions, I am convinced getting a backup supply was a good idea.

I am convinced getting a backup supply was a good idea.

Well, I am not sure. I have worked for 25 years in electronics, and we had several backup power supply. Some small for computers, and a huge for the whole laboratory to protect measure instruments and machines.

It is a fact that in case of lightning storm they offered a good buffer protection in most cases (but were often partially affected by the surge and required expensive maintenance), but on the long time it appeared that these big supply unit had more often failures than the power units in our various devices (measure instruments and computers). Here, there are sometimes strong and close lightnings, but not often, and the power is rarely down. So I think that a backup supply would bring me more risks of failures than protection. So, I prefer to shut down and unplug my machines in case of storm…

Modelled in Blender, rendered in Octane.

I’d want to make some posters, but currently I can’t render beyond 2560x1440 without getting a blackscreen. I have to try redering by tiles.

The images can be seen in original resolution through my website (click to enlarge in your browser) : 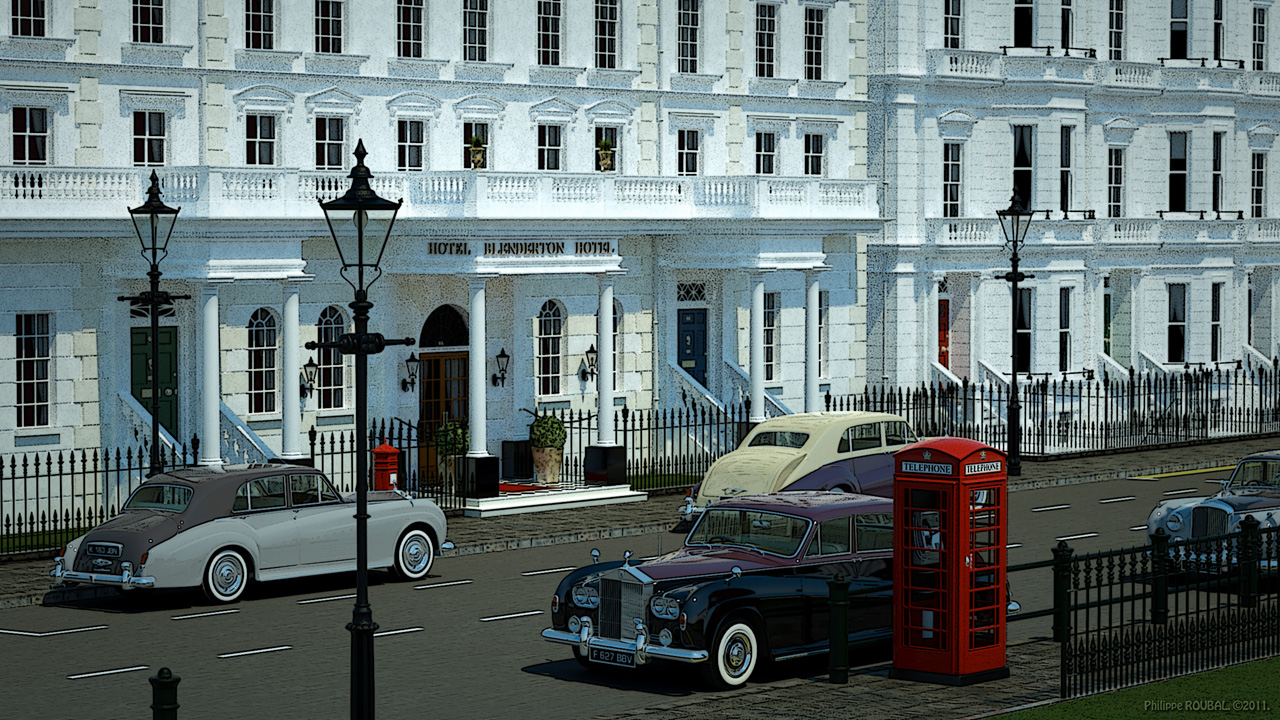 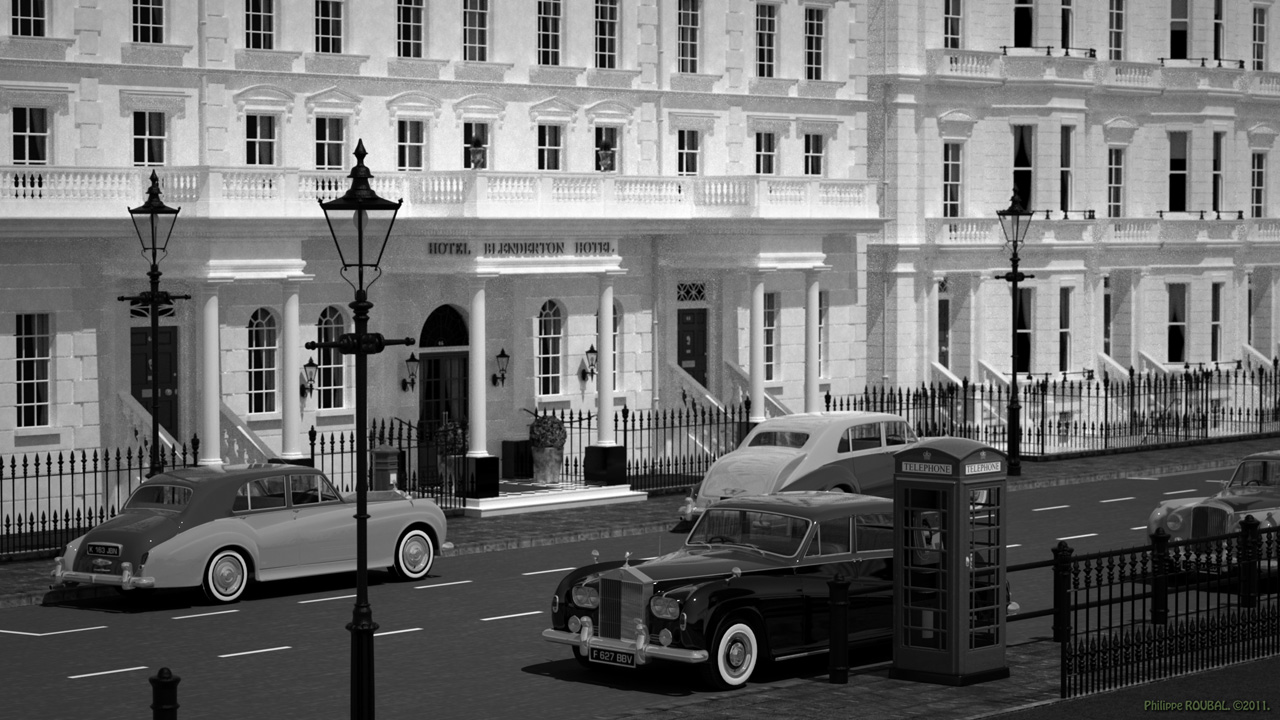 Thank you ! The image is still rendering in Octane. Despite the 35°C in the house, I will let it render all the night to get rid of the grain. I will update the images after that and I will render the same view at night. I have also to do some tests, because I’d like to show a wet car, just after the rain, with droplets on it…

I think that I will render it again with some flowers in pots on few balconies on the right (Angle bay windows).