Blending Life - Cat A - Self

OK, even though I have been working on this since I entered the contest, I have not posted any progress yet. Its my first time posting and participating in a Blender contest but I have been a long time admirer of the Blender and the Blender community.

I did everything in Blender (internal renderer) and Gimp (with the normal map pluggin). Anyway, modeling and setting up the basic texture seemed pretty straight forward. However, tweaking the SSS and making convincing hair has been more difficult for me. The model has LOTS of curly hair. For some bizarre reason I can’t get some hair to make a shadow :mad: (see yellow arrow), and I think this was making the model look bald… the solution, more hair, which has made rendering times very long.

I think I have to start thinking of finishing this off, because I signed up for both categories… I will try to solve the hair shadow thing (the beard hair is the same material as the head hair and it casts a good shadow…

whats going on?), and then put something in the background for realism. Any comments are greatly appreciated. 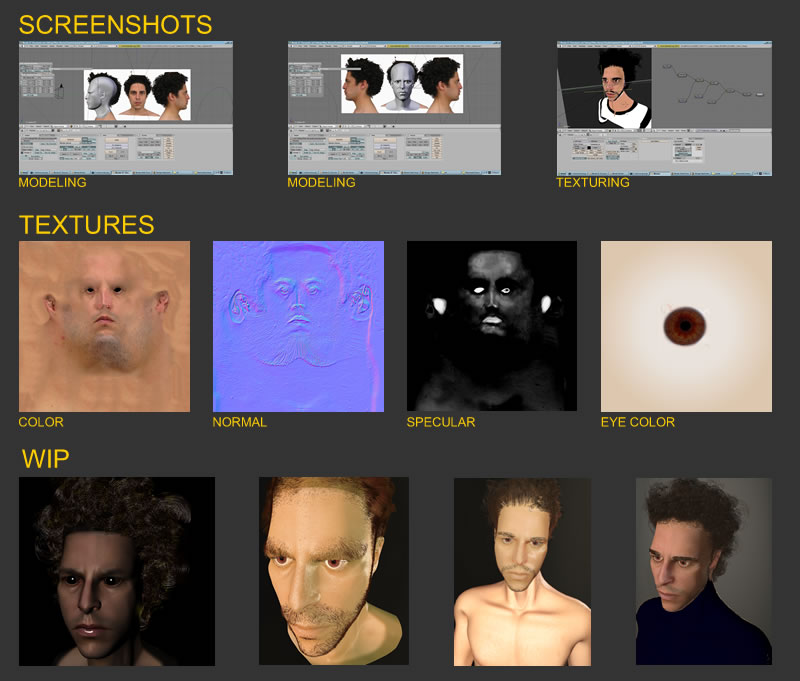 Good progress! Some comments and suggestions:

Thanks for your comments Chipmasque. The lens definitely works much better with a longer lens. Somehow the hair material is not working properly even though it is traceable… perhaps there are too many hairs in the scene. I am posting the next to last render. Each full size image takes over 6 hours to render. I am going to fix all the details I can before the final render and send this off to the press.