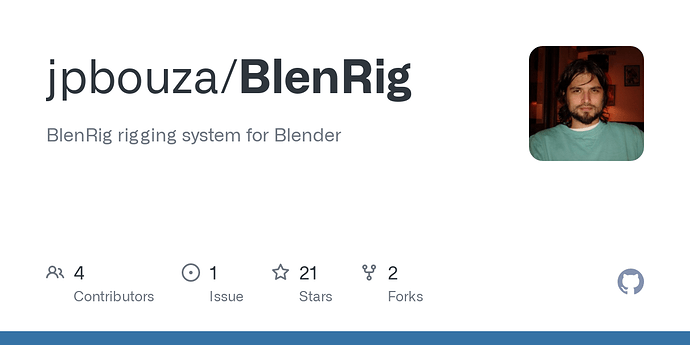 BlenRig rigging system for Blender. Contribute to jpbouza/BlenRig development by creating an account on GitHub.

We’ll be waiting for your feedback to improve things.

In the scene where you have your character just add the BlenRig 6 rig. With the rig selected go to the BlenRig 6 Tab and then to the Rigging Assistant tab, start with the guides in order 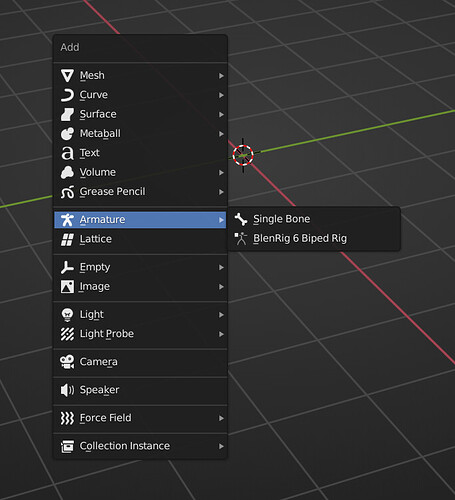 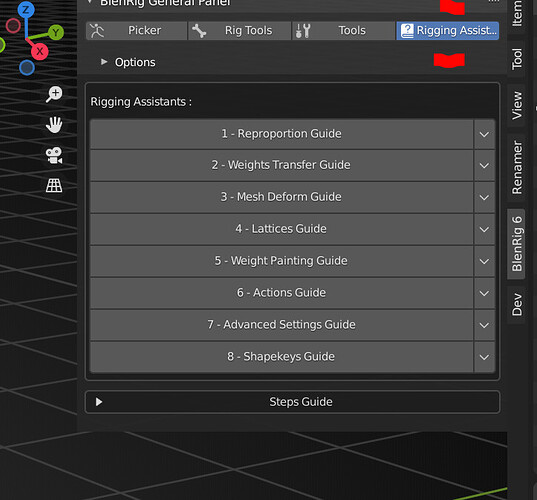 I’ll keep on working on some minor fixes to do an official release soon!

Also, the addon has been tested in 2.93, there are some minor issues with Blender 3.0 that will be fixed soon.

Join the BlenRig Discord if you want to chat there! 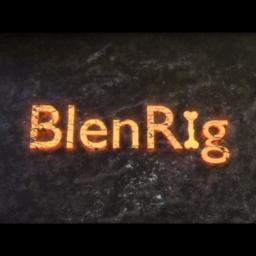 Check out the BlenRig - Character Rigging Server community on Discord - hang out with 152 other members and enjoy free voice and text chat.

.
.
.
.
Also, to support BlenRig, you can get Fredegund - The BlenRig Skeleton! 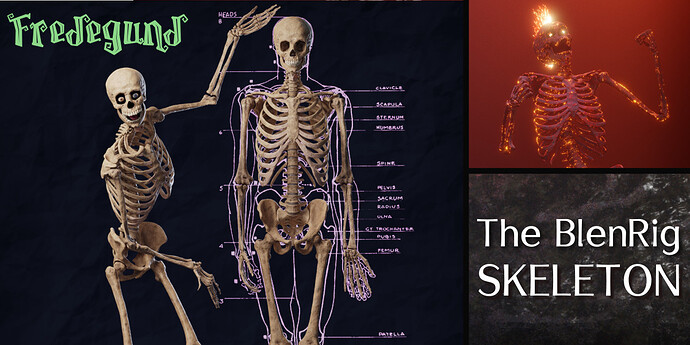 Fredegund - The BlenRig Skeleton is an anatomically correct skeleton rigged in Blender with the new BlenRig 6. It is also a fun character to work with and it has tons of options to make it fully customizable. The rig is also game engine ready.

Wow! I wasn´t expecting this to be released outside of Blender cloud, but I will sign up for the cloud anyway next month for the tutorials, and to support Blender development in general (supporting through dev fund already). Can´t wait to try this for my project! Muchas gracias por la generosidad, Juan Pablo! Trabajo buen hecho

Thank you very much man, it looks great; I’ll try it out tonight

yea also from my side a big thanks.
subscribed already… i wait a long time for such a powerful rig.

Thanks for the comments guys!

I’ve got some hard work ahead with the video tutorials now. Also, I’ll add some quadruped rig later on, among other things

thanks so much for sharing this! I hope I will have the right occasion to test it soon, looks really good!

Just THANK YOU and one question, is this going to work well with mecanim in Unity and Mixamo???

Well, the current biped preset is aimed for film production, not games. Nevertheless, right now we are doing some tests with Theory Animation for taking Ray & Clovis into an app, and exporting the deformation bones woks well. The only drawback with this procedure is that we depend on animation being done inside of Blender. In time I may do another rig preset that lets you export thing to game engines in a better way, but I have to admit that I still don’t have much knowledge in what it technically required for doing that. I’ve heard that rigify is somehow compatible, so if someone could point me to some documentation on how rigify does it, I could start thinking on doing it myself too

Why is this rig so nuts? Any points on why this version is different/better than Blenrig 4? i downloaded the rig but havent had a chance to experiment yet.

mmm… GUI, rig picker, crazy facial rig, rig proven to work for feature films, more and better controls… BlenRig 4 was ok, but throughout these years I’ve had the chance to work in really important projects and with people who gave a lot of feedback, so, things have improved quite a bit. I could say that BlenRig 4 was not entirely for professional use, but this one really is.

would it be possible for you to do a quick rundown on the process of using the rig?

would it be possible for you to do a quick rundown on the process of using the rig?

Indy_logic, yes, there is a pdf guide in the Blender Cloud, but it is cloud exclusive material. Right now I’m starting to do some video tutorials for it too. I guess that at some point all these things will be released for free, but not any time soon, cause we need people to support the cloud

In fact the further development of BlenRig inside the Cloud depends on how many new subscribers BlenRig can get, so I personally need this kind of support too!

If there’s anyone who really can’t afford subscribing, just contact me in private and we’ll see what we can do about it :), but really, the more subscribers the Cloud gets, the more projects like BlenRig will be able to be developed and funded in there.

In fact the further development of BlenRig inside the Cloud depends on how many new subscribers BlenRig can get, so I personally need this kind of support too!

I actually re-activated my BlenderCloud account for BlenRig. Looking forward to those video tutorials.

Congrats on such an amazing work!

Hi Leafar!
I’ve heard that rigify is somehow compatible, so if someone could point me to some documentation on how rigify does it, I could start thinking on doing it myself too

I would like to clarify a bit of how rigify is and is not compatible.

I will take unity as an example game engine on here. Because nowadays we have an option to export only deform bones when using .FBX so it means that almost any rig can be used inside unity’s mecanim. But why the rigify is not really that compatible is that some of Rigify’s (at least in pitchiboys rig) deform bones are childs of rigify’s MCH- bones so Blender will also export those bones which we do not need and are useless and clutter the rig in unity.

If you want to make a Unity compatible rig in BlenRig then the rig deforming bones should be like this:

and fingers for example:

These names are just of course examples. The hierarchy is the important one, not the names. Of course there should be side separators (_L, _R) so unity will know how to automatically make a mecanim avatar in unity.

Thanks for the info Etana!

I can attest to the power of blenrig already, and it keeps getting better and better, JP! Love the facial controls in it, but the rest of the full rig is crazy powerful as well

jpbouza- Thanks a ton for the response. I also really dug the model you built with Blenrig 4. Outstanding model. I’ve used and re-used that mesh a thousand times as a base. fantastic hands and feet, and use of a cage deformer.

So am I looking forward to this rig?! Absolutely.