Here is a work I created recently. I’d like to hear some harsh critiques so I can improve. 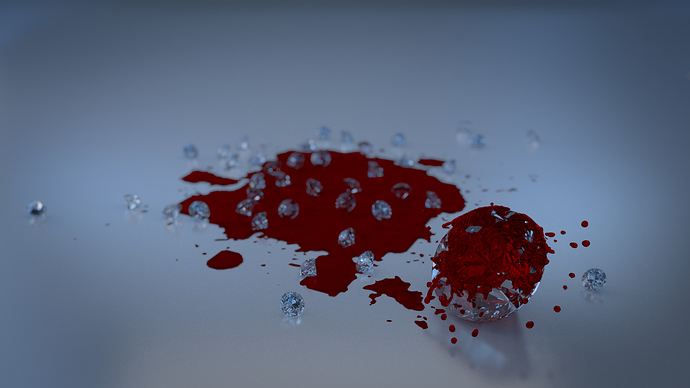 The layout of the image seems great to me but the lighting is a bit flat. What’s bothering me most, though is the blood. Actually it’s not bothering me enough, I usually get queasy when I see blood but this just isn’t doing it, it looks like jelly. I’ve never tried to render blood before but I would make it a bit of a darker red, use SSS rather than a transparent shader, and then work from there.

Other than the shader for the blood, some of the droplets around the big diamond look like they’re floating as if they have just bounced off of the diamond and have not yet reached the ground.

On a more positive note, DOF is often overused but I think you did a great job of using it to bring focus to the big diamond in front. I also like the contrast of the blood against the colorless surroundings, it reminds me of one of those black and white pictures where only a few objects are colored in.

Thanks for your response FuzzyPeachApple.

I’m not sure how to change the lighting to make it less flat, there was a previous version that was even more flat. I’m using an hdr and two area lights.

The droplets are in the air since the blood on the big diamond just fell on it.

I’m aware that the shader needs work but I didn’t think of using sss, I’ll try it and see how it goes.

I’m glad I could help. I really want to see where this goes. As for the lighting, I too can’t think of any way to make it less flat, unless you want to put it into a scene which, if you choose to go that route, could add more of a story to the picture. I’m not sure if that is what you’re aiming for, though.

I’d say the blood needs to be, darker in color, less “watery” more of an “school glue” consistency, and less transparent.

Concerning the lighting I would consider putting either a spotlight in there to getr some highlight/hotspot or whatever you want to call it.
Or oyu could put a light in the back of the scene so you’ll have a rimlight in there