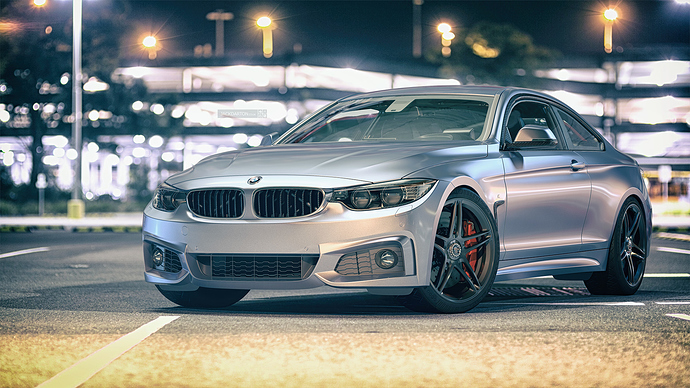 Great stuff. Love the look of those brake pads behind the rims.

That’s right. I thought it was a photo in the first sight if no one told me.

how many stars could I give you?

Amazing! Just add the BMW logo on the image, and it’s an official BMW Commercial shot

Very good work
5 stars for you

I love the car paint shader!!!

Wow! Beautiful render. The reflections are perfect and the colors are very well composed.
Did you use an HDRI for the lighting?

Very nice job! I like this one. It stands out from most on this forum.

It looks amazing. The only minor criticism I have is that the model looks a little too bright compared to the background, especially underneath the car. Other than that, it looks like a image straight out of a BMW car commercial!

I cannot tell if this is modeled in Blender or a CAD model !
Is everything rendered?

Could you clarify this?

Thank you so much for the great comments guys!

The base car model was purchased as the entire exercise was one of rendering and composition. The wheels however are my own, the tires, rims, brakes, modeled by myself.

The backdrop is a photo taken by a good friend of mine, so I did my best to fit the car into the scene nicely. I like how it turned out, I spent many hours tweaking the car paint, composition, colours, lighting, materials, etc. Along with a few spotlights and area lights, I used an HDRI from Greg Zaal, part of one of the www.hdrihaven.com packages.