I am rigging a realistic human model, and I am setting up a shapekey for the bicep so that it flexes when the elbow is bent:

The bone that is supposed to be driving the shapekey is the Deformation bone, which isn’t directly manipulated when posing the rig. The rig consists of three sets of bones: Deformation, FK, and IK. Only the FK and IK bones are manipulated for posing, and their rotation is copied to the Deformation bones by Copy Rotation constraints, whose values are driven by sliders:

The bicep shapekey doesn’t activate when I bend the arm bone using the IK or FK arm bones, but only when I manipulate the Deformation bone directly:

It seems like this would probably be a problem with the copy rotation constraint, but I’ve fooled with the settings a lot. For a while I thought I found a workaround: make the rotation of the IK and FK bones drive the shapekey. But this worked only for the FK bones and wouldn’t have been ideal anyway, because if I had to make a change to the driver I would have to do it twice.

Any ideas about how to fix this so that the IK and FK bones actually drive the Deformation bone rotation driver? 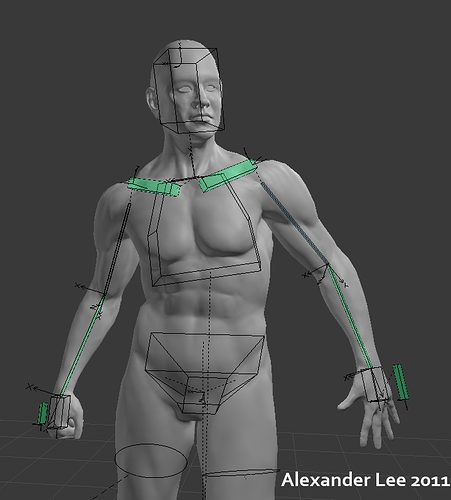