I’m following the steps in the book ‘Introducing Character Animation with Blender’ by Tony Mullen and my character (Batman from the old cartoon) is very similar to his. Like in the book, I’m having a problem with the belt as the character walks and runs.

So, I followed the same steps: create a Shape Key which stretches the belt out. Then, use Bones in the Armature to drive that Shape Key via “Rotational Difference”. So I followed the steps precisely…but I can’t get ANY results. (I have some experience with Drivers now, too.) Below are illustrated screencaps.

So any explanations and solutions would be greatly appreciated. Thanks as always. 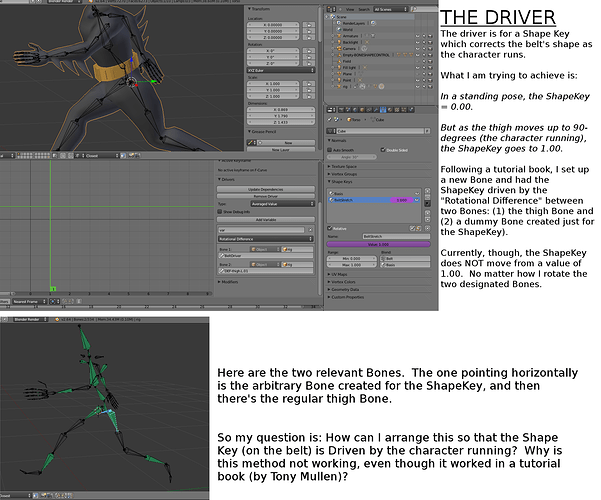 What does your driver curve/function look like? If it is generating numbers larger than 1.0 then it might just be getting clipped.

What does your driver curve/function look like? If it is generating numbers larger than 1.0 then it might just be getting clipped.

Well, I’ve tried it without the curve function modifier and with one. Without one (which was how it was presented in the book), I believe that it’s just supposed to use the absolute value of the rotation in radiuns or some such. But of course, I got no response, and the “driven” Shape Key was always at 1.00.

When I added a Modifier, I played with the values a ton, and while I did get SOME response, the range was always just a tiny bit (in other words, the Shape Key might’ve gone from .495 to .499).