Hi guys! Me and Anfeo are very proud to present our creation! The Book Wizard Cover Generator!
No more pain when it comes to fill a library with books! With this tool you will be able to generate thousand of different covers for your books according to your needs and taste with a pair of clicks! 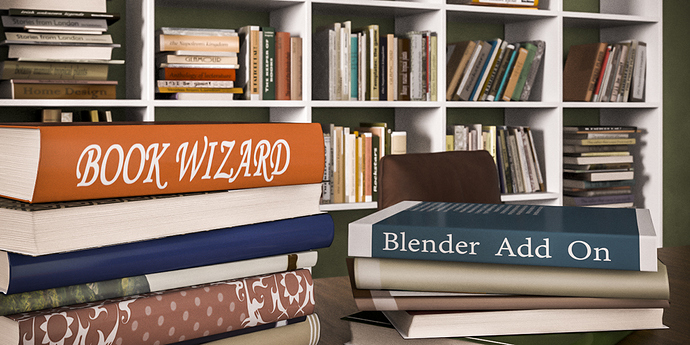 The Book Wizard is an add-on for Blender available on the Blender Market. With the script are included hundreds of books disposed in rows and stacks, with random dimensions, rotations and deformations. But more important, there are 90 different textures that will be combined by the script to generate a lot of different covers for your books!

The coolest thing is that the books colors are not dependent by the textures; instead you can define exactly what colors the script must use for your books, to transform an elegant library with black and white books to most coloured you want.

Let me show you an example. Look at the scene below:

When you finish to place the books the scene appears as in this image, with the base material applied. 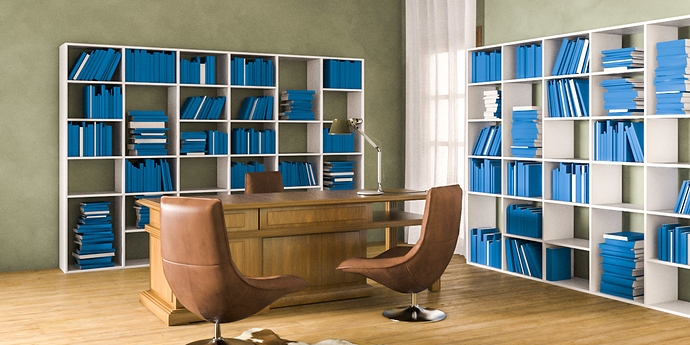 But it is a matter of seconds to transform that blue wall into one of the following libraries. To determine the colors of the books it is enough to create an image with the needed colors within, then generate the covers. The titles and the graphic elements of the books will be used randomly from the textures folders, ensuring an high variation beetwen all the books. 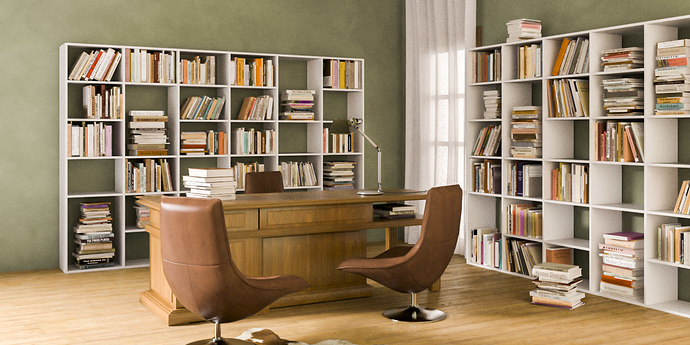 Also, as you can see in the featured image, the provided books are realistic and detailed enough even for closeup renders.

Here the link to the Blender Market http://cgcookiemarkets.com/blender/all-products/book-wizard-covers-generator/

Hope you find this useful and appreciate our work. Happy Blending! Bye!

(the other libraries generated with the script) 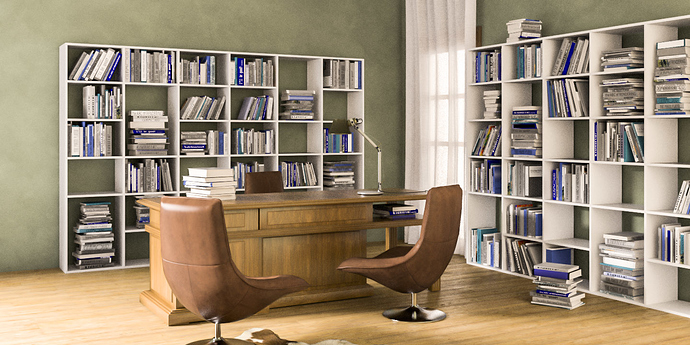 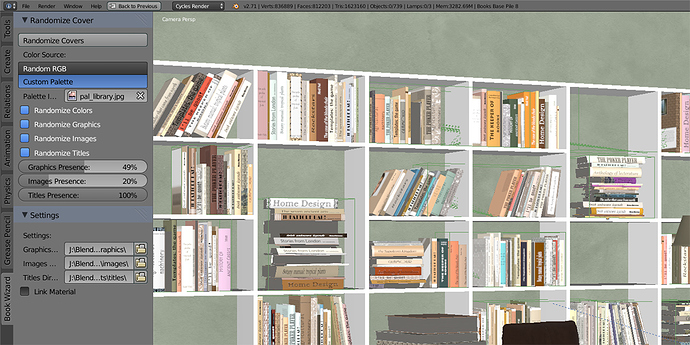 Let me know your comments! bye!

Pretty cool! I spent some time building a library of books with a smart cycles shader to texture them, But if I were in a rush, that would be a handy addon!

Since it must be Open Source when its on blendermarket and is under the GLP license can you give me the Source Code ? That shouldnt be a Problem since its Open Source and anyone who wants can edit the code.

Since it must be Open Source when its on blendermarket and is under the GLP license can you give me the Source Code ? That shouldnt be a Problem since its Open Source and anyone who wants can edit the code.

It doesn’t work like that. You get the source-code when you buy the scipt/addon since GPL only covers sharing the files, he is not obligated to just give the code away because someone asked for it.

@Lell, the addon looks really nice. Could save a lot of time when trying to make a library

I was wondering, books placement is still highly manual and can be tedious for huge libraries/public libraries…is something about it planned?

I made a quick GIF example here (don’t know absolutely if python api permits this kind of thing), basically:

Yeah mischa it doesnt work like that but do you know how it works ? When someone buys a programm with a gpl license he can do whatever he wants even distribute this software for free and yes that would be legal you could totally buy this program and then lets say it upload it to a Data Hosting site and then give the link in Public and that would be totally legal.

Is it possible to make our own custom stacks with this? It would also be nice to select a stack, click on a different seed and get a new randomly generated stack as well.

Great addon btw, I really like the colour palette feature. I can finally make a book shelf that matches the colours in the room.

Hi guys! Thanks for comments and appreciations!

I want start saying that I’m planning to create a simplyfied and free version of this script, and I’m thinking about how it should work. It shouldn’t take too much time so stay tunned.

@MarcoG: you read in my mind. The books generator is on the way as well, but we have some problems still to solve, and at the moment I have no much time to spend on it, so it will take some months to be developed. That’s why I don’t want to make promises. And probably the way you suggest will be one that allows you to define the area where the books will generate.

I forget to say that you can watch the full tutorial to see deeply how it works, and maybe to see how to place the provided books faster.

Is it possible to make our own custom stacks with this? It would also be nice to select a stack, click on a different seed and get a new randomly generated stack as well.

I don’t get exactly what you mean. But I can tell you that this add-on doesn’t preclude any possibilities, becouse the books models and shader remains free to be edited before and after the script, and you can run the script many times until you don’t have a good result. You can select just some books and generate their covers with a completly different color palette, and also using your textures and setting them manually. And you can also use your own books, as long as you give them the Universal Cover material. You can take the base books and create your own stacks giving them your desired deformations thanks to the shape keys of the books. Hope I answered you question!

Cool addon. I don’t do arch-vis, so it won’t be much use to me, but I’m sure there are many people out there who really need this. If you make a free version I will play around with it though.

This is a really cool add on! I used it, and it’s really easy to use and a time saver. In no time you can have beautiful piles of books! Recommended!

Hi Lell, nice you’re working on such script!
I was wondering, books placement is still highly manual and can be tedious for huge libraries/public libraries…is something about it planned?

It’s definitily a MUST HAVE !

@Lell
I very hope you can add that function to the Script and I hope you really will FINISH it. Not like so many other promising but unfinished (= USELESS !) Blender-Scripts.

Nice script this one! It could be a good inspiration for our future book generator.

Probably it wasn’t very clear, but there is one thing to specify for the benefit of this script.
Usually, with other book generators, you have to re-generate the books to obtain a library with the needed colors, becouse the material is linked with the book model. You can change the books materials, but it isn’t as fast as regenerating the library with the right books.

With this add-on, instead, once you placed the books models and made several rows and stacks and every composition you need, you don’t care of the colors no more, becouse it allows you to generate them as you need, don’t worrying about what were before. So, once you have a certain number of books groups, you don’t have need for a generator of models. This is why I provided the buyer with some books groups already arranged and randomized (600 books, to be precise).

Of course, having a models generator is always a good thing, but becomes of secondary importance in this case.

Hi, I’m receiving and I see around many critics about the Blender Market and about the fact that assets are sold instead of being shared freely, so I want to say what is my opinion about it.

Many say that Blender is free, but it isn’t true. It is paid by those who make donations and by public contributions. So it is paid voluntarily, not free.
Second, the Blender Market, since it started, contributed heavily to the Blender Development raising almost 2000 dollars of contributions, becouse the most part of the product gives a percentage donation to the Blender Foundation.
Third, usually the free add-ons and assets are not so professional as those sold in the market. Professional users needs professional tools, so the Market contributes to create more professional tools and assets that attract professional users to Blender. This makes Blender grow, also in reputation.

So the Blender Market is only a good thing for Blender community, not bad. And I hope that those that criticize have made at least a donation to the foundation in their life.

Keep going your good/payed work !
Nothing in this world is for free, everthing has to be payed - sooner or later.

Yeah mischa it doesnt work like that but do you know how it works ? When someone buys a programm with a gpl license he can do whatever he wants even distribute this software for free and yes that would be legal you could totally buy this program and then lets say it upload it to a Data Hosting site and then give the link in Public and that would be totally legal.

Brilliant work. I have manually made many book covers and it’s a tedious thing. Don’t need it right now, but will keep in mind and purchase next time the need arises… thanks!

I don’t think that redestributing the models and textures you receive with this add-on is legal. And with just the script itself you don’t do so much.

Thanks Alain and NRK!

Just bought this addon and have found it a great time saver in filling bookcase shelves however there is one thing that the authors need to address and that is the grammar, spelling and use of upper and lower case in the titles of the books (cover elements). For example one book is titled “Anthology of lecterature” where it should read “Anthology of Literature”. Another is titled “Simple recipes for housewifes” where it should read “Simple Recipes for Housewives”. One book has the title “Twilight on mountains” on the cover but “Twilight in mountains” on the spine of the book. There are many more spelling and grammatical errors and nonsense book descriptions that don’t relate to the books titles at all. These errors are fixable but should have been picked up prior to the addon being released for sale. I hope the addon authors correct these mistakes in an update.