Boolean difficulty despite lots of troubleshooting

I’m having difficulty with the intersect boolean modifier. I am attempting to punch a hole that is a particular shape in another object. I have read as much as I can about what might be going wrong, however it’s still not working;

Depending on what I’m trying, the result is either the larger mesh disappearing, or I end up with a result akin to a difference boolean (smaller object indents into larger one).

I have punched holes in objects similar to this larger one before using just a cylinder so I don’t think it is a lack of complexity of the mesh. I’m at a bit of a loss at this stage, any ideas? I’ve attached a screen shot and the smaller mesh as for some reason I can’t upload the larger one (even though it is under the required size) 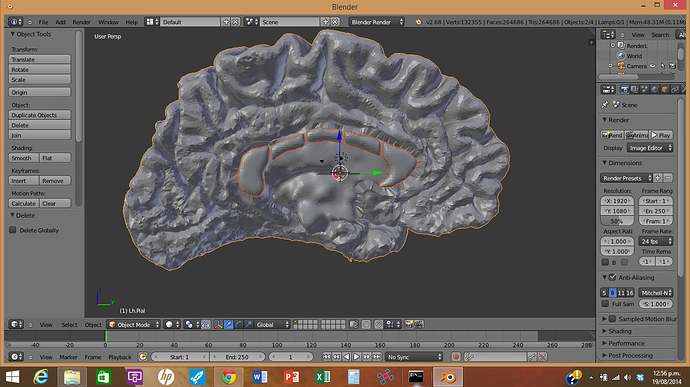 Perhaps there is an alternative to boolean that could punch this hole for me?

The object in th file you uploaded has no discernible problems, so the other object seems likely to be the problem.
I am curious as to what you think ‘Intersect’ means, because you said you want to punch a hole in an object, which in every programwould call for the ‘difference’ or ‘subtract’ Boolean. ‘Intersect’ means to leave only the volume common to both. Have you tried out these operations with two similarly sized but much simpler meshes, just to see what they mean?
In addition since the Boolean mod is non destructive, so after you use it the target object will have to be hidden or moved to another layer in order to see the effect. This is the biggest cause for complaint about this modifier, “The Boolean modifier does nothing!” :evilgrin:

Intersection of a large object with a small object would result in the large object vanishing as you describe!

To see what I mean, download and open thisfile and press Alt A to play the animated Boolean. Watch the outliner to see the eyes opening and closing.