hi,
i was modeling a rear fender and i have a problem…
what i did was adding a torus, upped the vertices and cut out a figure with the boolean difference modifier.
looks like the cutting worked, but there’s some strange looking parts on the edges of the cut-out.
can any one tell me how to get rid of these strange looking edges? 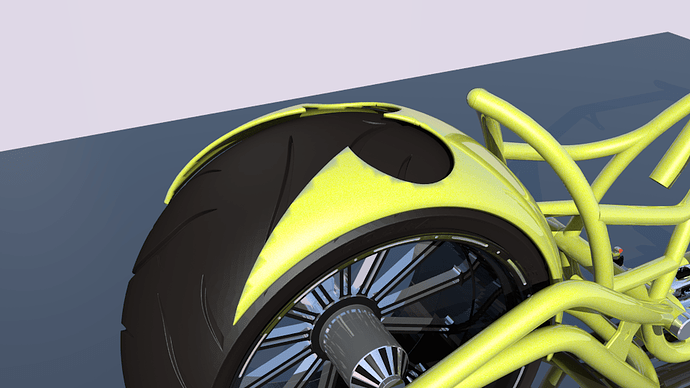 Hello, you can try to use Subdivide on fender for thicken mesh before use Boolean. Show fender closer, in wireframe mode. 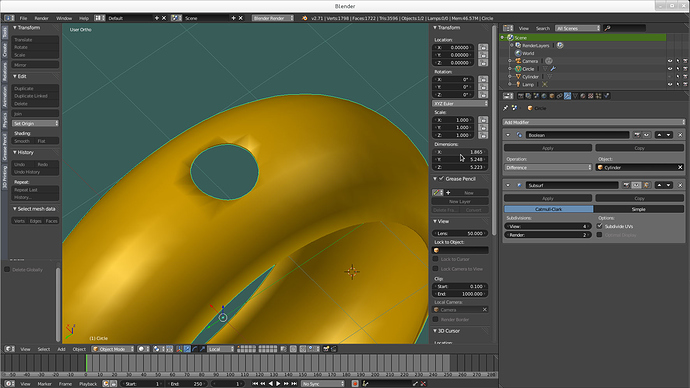 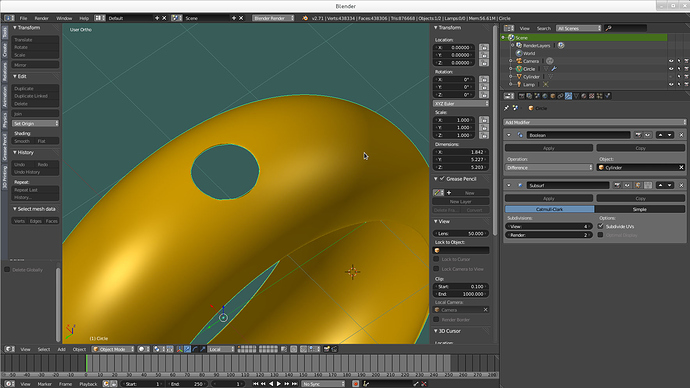 hi, thanx for the quick reply…

here’s a pic in wireframe mode: 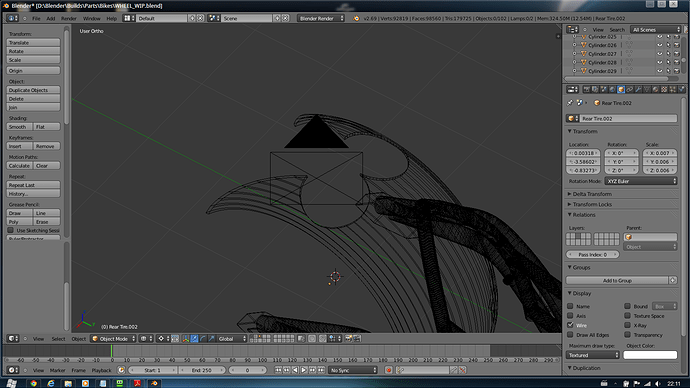 and here’s one in edit mode: 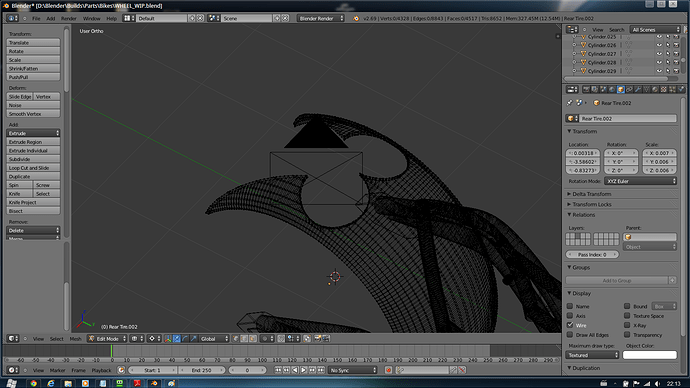 isn’t it strande that they look different?

ps: tried the subdivider modifier, but that makes it only worse…

You certainly do not want ngons around circle on bent surface. It needs to be cleared up manually after boolean. 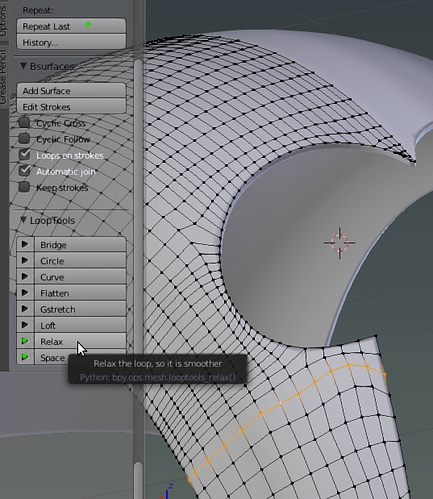 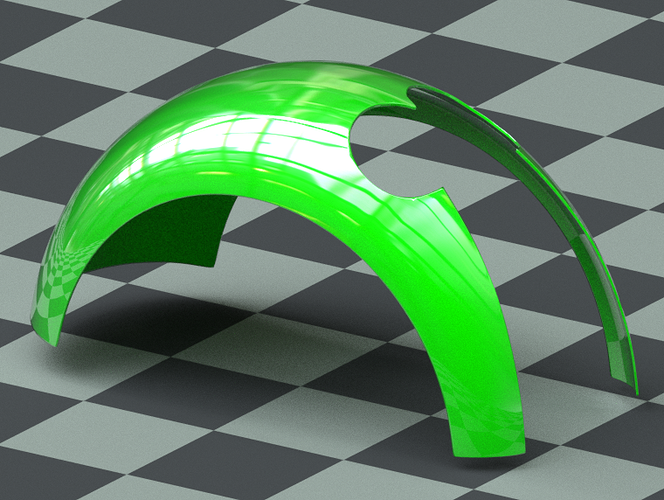 hmmm, you’re probably right eppo… but what are ngons???

anyway, yours looks great. can i see it in edit mode?

@piotrpl: i think that’s where i went wrong. guess i’ll have to start over with the fender.

ps: just how do i “recalculate” an object?
CTRL+N only gives me (left) side view…

anyway, i followed (most) your steps and the result is 100% better than what i created. 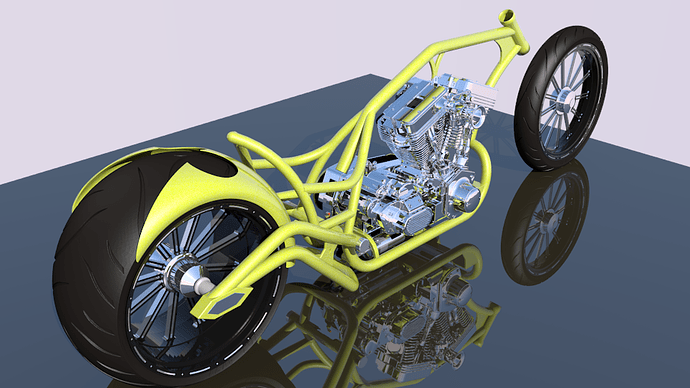 off to the next problem…

can i see it in edit mode?

Blend file is right under the image ;).

still something is wrong somewhere…
if i select DIFFERENCE in boolean, the 2 parts join. but when i select UNION, i get what i should get with DIFFERENCE…

any one else has this problem?
(not realy a “problem” as i still get what i want, but…) 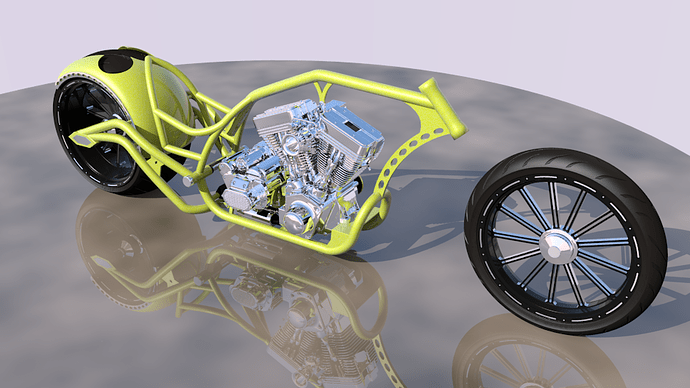 but now i see some other strange things in the holes of the rear fender struts: 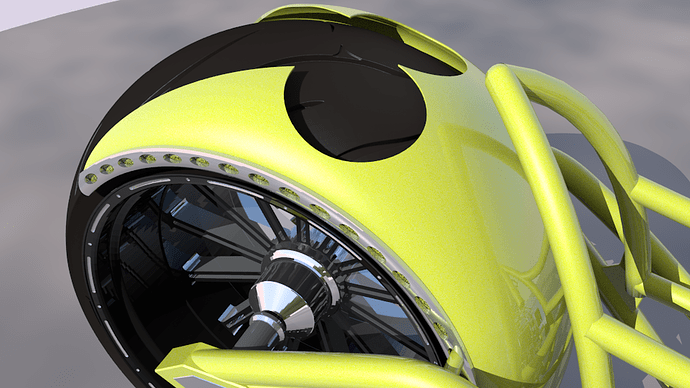 any one knows how they got there?.. or better still, how to get rid of them?
they weren’t there before adding the struts…

Do you have one closed object (3 in total) for boolean operation(s) and fender has Solidify applied before? If not you’re dealing lets say with plane and cylinder. Boolean difference will be different compared to if you used closed solids. And there are more variations… 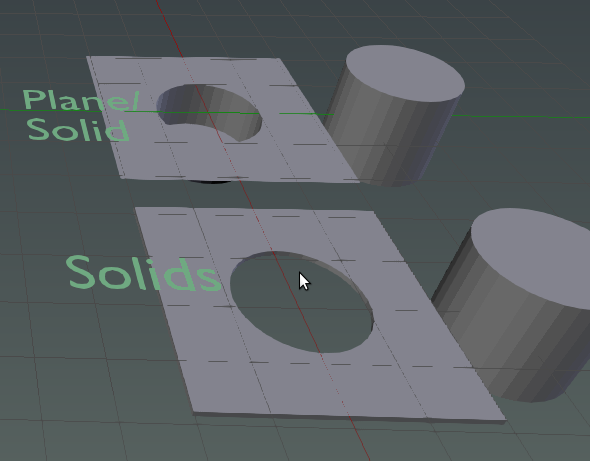 As for the holes - you have Subsurf on fender and there was no subsurf mod on plank. You joined them likely? So subsurf now is on plank too.
If that’s not the case - idk, post plank’s mesh and modifiers in use.

hmmm… like i said before, i had no schooling or education in any cad programs. so it’s hard for me to understand just what you’re saying.
but the fender and the struts are separate items, although i copied part of the fender to create the struts. otherwise it would be very difficult to get the right shape.
i read somewhere that one could also do this with one of the boolean features, but i lost the tut.
maybe that would be a better idea…

anyway, i can’t always use subdivide modifier as sometimes it totaly sr*ws up the object i created. that’s probably not a blender bug, but a wrongly made object. i just don’t know any other way (yet).
i’m a bike builder, not a graphics designer see…

ps: how do i close a solid?

4 triangles connected as a pyramid is simplest possible solid. Cube, torus, sphere are solids too. Plane and circle is not…
Extrude plane face and you get solid. Apply Solidify to plane and it’s solid - it has volume and is closed from all sides, no holes in it.
You get the idea.
Here’s the holes… http://www.pasteall.org/blend/30032

ps: how do i close a solid?

Here https://www.youtube.com/watch?v=3JAZsJv7vUE&wide is short video “Boolean Modifier without errors”. Some automatically created objects have holes in mesh, that why Boolean Modifier may return some bugs. Hope it helps.

ok, thanx guys… glad you have some patience with an old biker here.

the fender was made by adding a torus (wich should be a solid), but then cut out as a bended plane (no more solid).
but after getting the right shape (without the cutout), i extruded the plane (now is solid again) to get the thickness.
after that i added subsurf modifier (view 4, wich was actualy a bit too much), and then i cut out the shape with boolean modifier.
but still i had to select union instead of difference to get the cutout.

When you did extrude you probably dragged in the wrong direction and reversed your normal in part of your mesh, and Boolean uses normals to determine intersection and difference. After the extrude select all and recalculate normal.

Booleans are not the best way to create circular holes in your geometry but you have done so much on this project you might as well keep on w/ it. In the future, try other modeling methods to make holes, there are lots of demos in this forum on the topic.

ok thanx, will look it up on how to make holes into things…
funny how easy it is in real life… you can drill, punch or burn holes in just about anything…

anyway, to more perfect my models look, the better as they are the bases of bikes we’re about to build.
it was the only way i could think of to show people what they would get before ordering a bike.
ofcourse these are just basic models on wich we will modify untill the client is 100% happy with it. 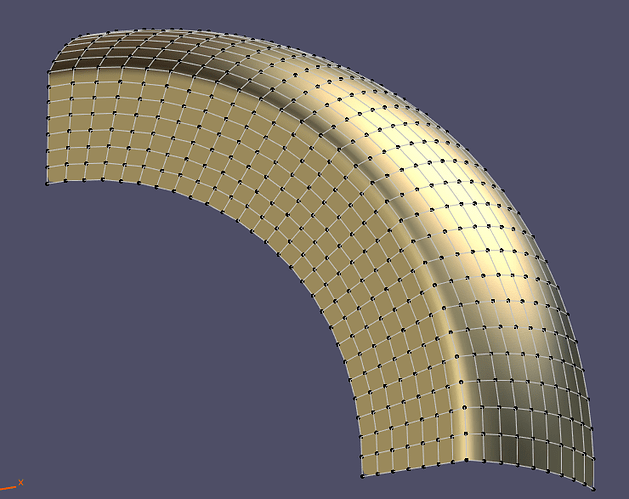 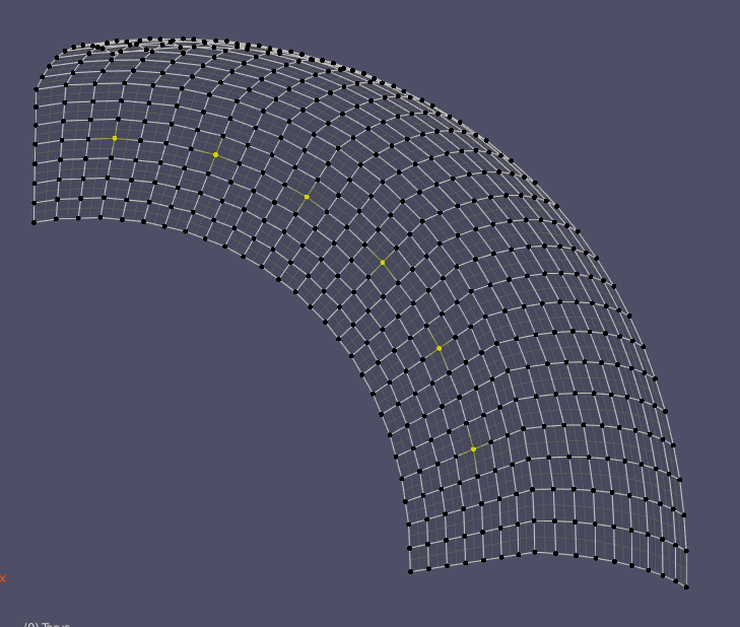 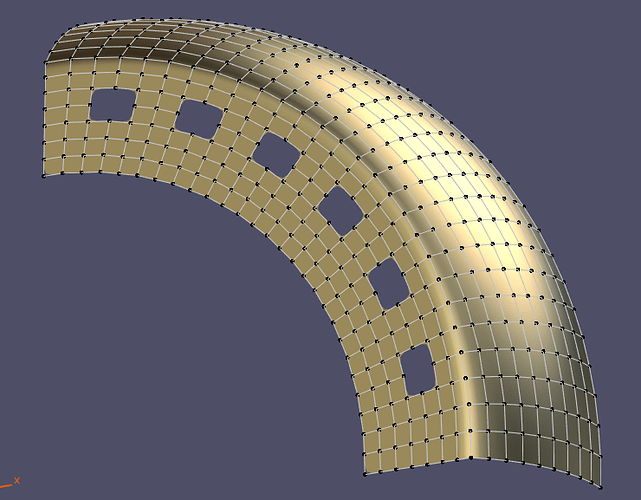