Bot Siege is an 3D action adventure game where the player has an array of swappable gadgets and weapons to help them defeat ill intentioned bots. The game takes place on some fictional Earth like world where humans have become more industrialized with the use of bots produced by a corporation named Blastco. Blastco after having enough bots in the world decide to use them to subdue the human race and siege global power.

Want to contribute to this project?
Please read here : http://bot-siege.weebly.com/1/post/2013/03/how-to-help.html

Bot Siege is an 3D action adventure game where the player has an array of swappable gadgets and weapons to help them defeat ill intentioned bots.  The game takes place on some fictional Earth like world where humans have become more...

I made an attempt to paint some muscle definition (not my strong point but I tried), not great, but okay enough I think. 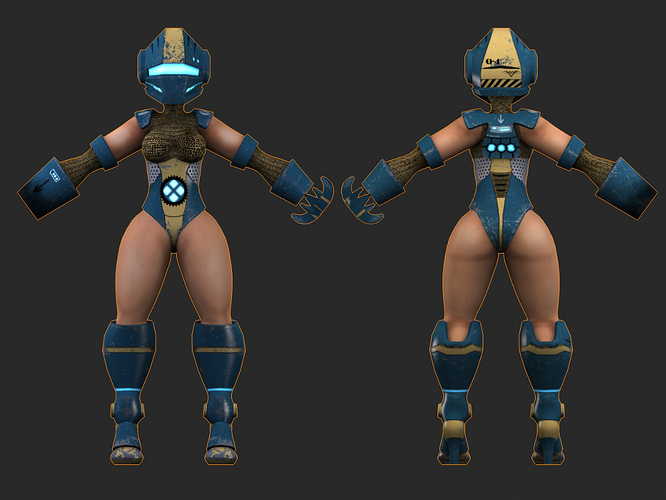 Also got 85-90% of the rig worked out. Have to see how well it all works. Animation is not my strong spot but I think I am going to attempt a run at it. 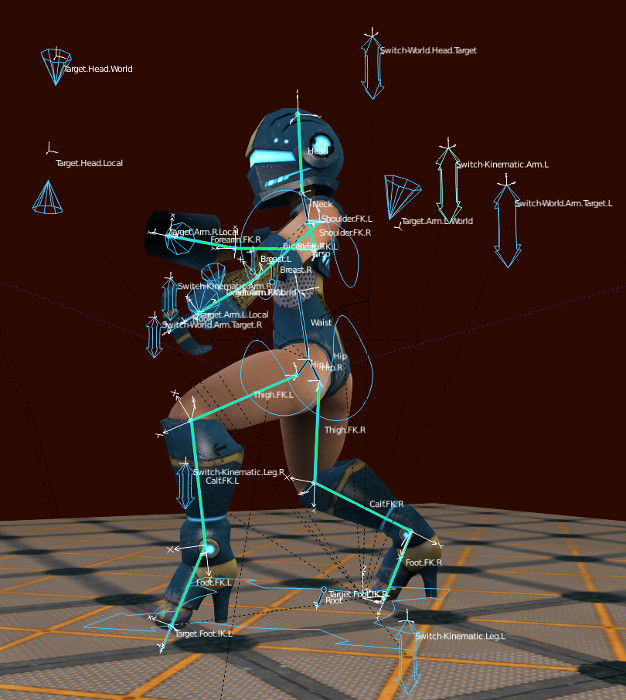 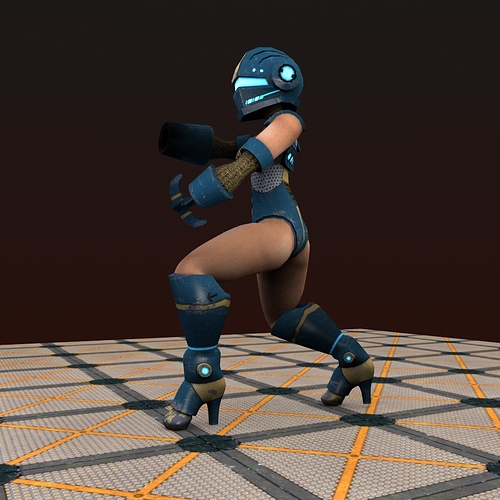 I don’t know anything about the BGE, but may need to try a run at that too… See how it goes here, animation is the frustrating part. Everything will be posted to Blendswap when I am done (CC-BY).

The skin looks great, as does the worn metal texture. the only thing that seems a little off is the woolen texture on her bosom: the weave of the material looks too large and inconsistent with, say, her arms and neck. Can’t wait to see the animation, though! I’d love to see her move.

Awesome, good point! That’s all masked off nicely to tweak on, I’ll give it a go. I think I am going redo the grapple-hook more of a grapple-claw too so she can grab things such as canisters (which has been modeled and getting textures) and bad guys. Appreciate the feedback!

Canister for health/energy. Think I went through textures too fast and will need to redo some of it. 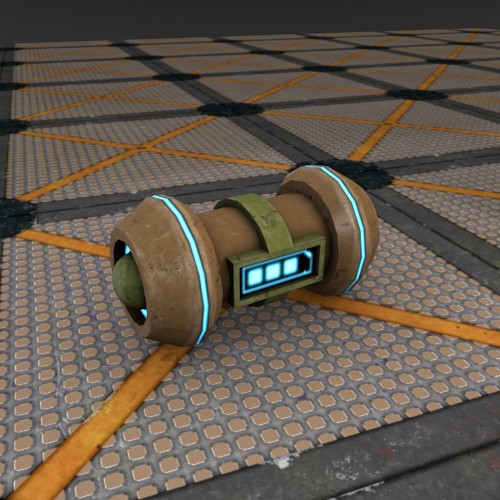 Todays update:
Claw was remodelled (now not fully manifold, but will allow the closing animation to work better I think), not yet fully re-texutred, but largely roughed in. Redid the fabric, @ MikeJM, good call there! Finished up the canister over lunch break. 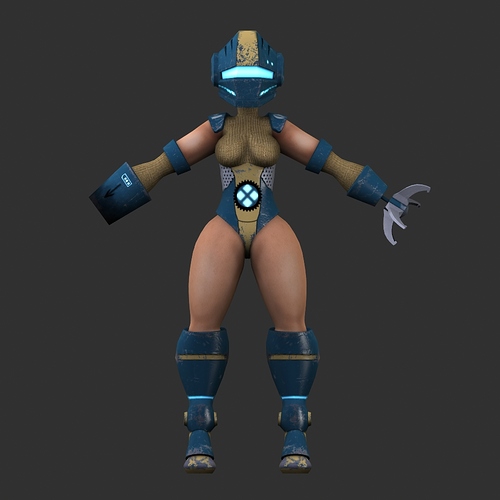 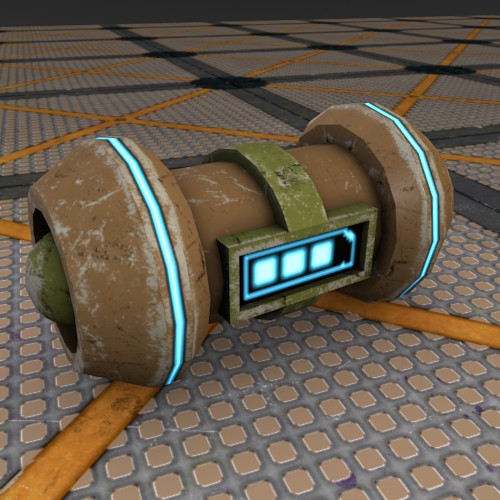 It might be your intention, but it looks like this girl’s hands have been cut off, which I find a little disturbing. Maybe you could extend the gun and grappler out so that it looks like she’s wearing them OVER her hands?

Of course, if she’s supposed to look like that, don’t mind me!

Other than that, the model with the revised fabric texture looks good to me. Looking forward to seeing more!

It’s good feedback, I was admittingly at a bit of dilemma about how to handle it. Bottom line, the left side and the right side are definitely unbalanced and awkward, and I’ll leave it at that. Before fixing the textures & rig… so how are we liking the new proportions? (and realize if I drop her arms to her side they should be about right for length while leaving what is underneath to the imagination. 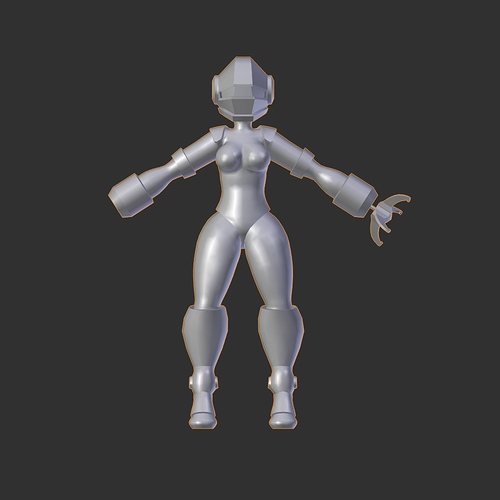 Last nights work. Rigged the claw, fixed the diffuse textures (in many places for many issues outside of the new topology, might even be able to spot the paint primer now). Redid the bump & normal maps (will be supplying both, rendered here with normal) and redid the specular map. She grew to 1358 vertices. The rig for the claw (I think) is cool. I learned a lot this pass and corrected lots. 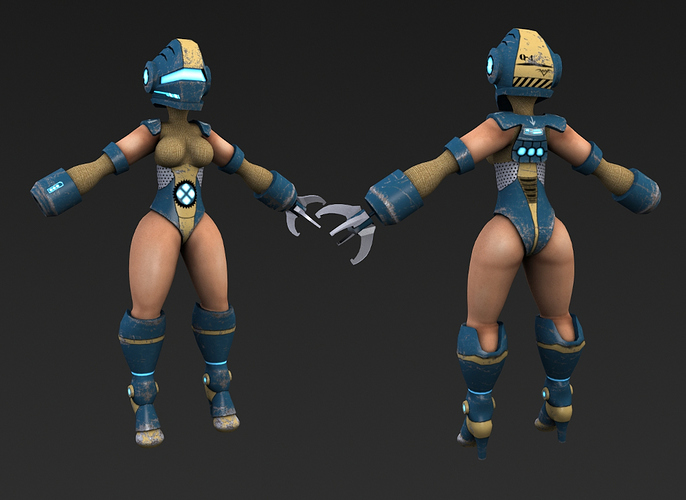 Finishing up the rig and working out the kinks and trying to improve some things. 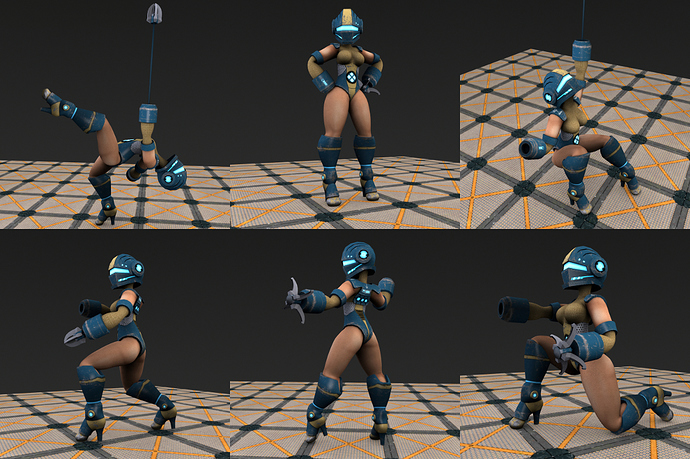 For those interested in having a closer look (of course the shading setters aren’t what they are in Blender and no emission map, but I did my best to get it alright).

I dunno, starting to think it’s time to release and move on, or model weapon upgrades & environment for her.

Awesome! The legs part that is

…but the rest is great too

I guess you ain’t just going to post the .blend up?
I’d love to try to animate her walking…

Awesome! The legs part that is

…but the rest is great too

I guess you ain’t just going to post the .blend up?
I’d love to try to animate her walking…

That would be very cool! It actually should be on Blendswap very soon (today).

That would be very cool! It actually should be on Blendswap very soon (today).

Sweet, just post the link here once it’s up, this way I don’t have to check all the time

I’ll post the animation here as well as soon as I am done… might be a while though, currently stuck in a programming project

Sorry for the delay:
@ http://www.blendswap.com/blends/characters/grapple-girl-2/

If you are interested in contributing anything (and don’t want to re-post to a 2nd spot), I will be happy to update the model with contributions and release notes reflecting the additions.

There is a part of me considering a 2.0 version of her too, moving the cannon and grapple to the back of the wrists and allowing for hands, and going a little more “proper” human all the while fixing some of the joint deformations.

I think I will work a few props to go with her first though and maybe some bad guys. 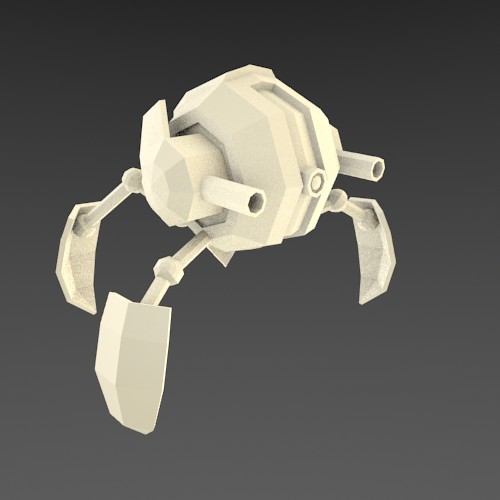 Mesh (pending UV unwrap) is done (thought a few spots stand to have some vertices to come out yet). This little fella I think will be a very nondiscriminatory shooter. Pew pew. 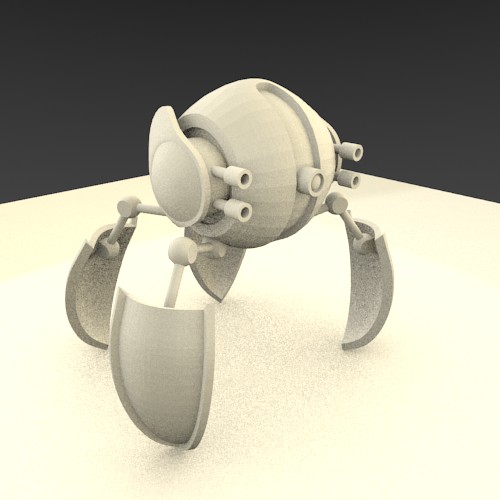 Loving this work Jeremy. Missed it until now. Keep it up man, very cool.