"Bounce, Tumble and Splash!" has arrived

Today I received my long awaited advance copies of Bounce, Tumble and Splash! Simulating the Physical World with Blender 3D and I have to say, I am pretty excited with the way they turned out. I took a bunch of snapshots to give people an idea of how the books look inside and out, and you can check those out here: 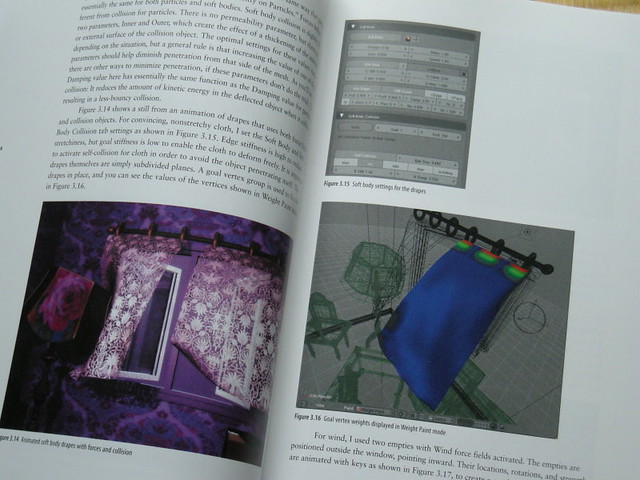 For those who don’t know, BTAS covers physics, fluids, soft bodies, cloth, particles (2.46 particles, including boids), hair, and a lot more of Blender’s high-powered simulation features in depth. I really think that it will help to bring these great features to a much wider audience. If you haven’t already seen the teaser video in my signature, by all means check it out to get an idea of what this book covers.

The book is listed on Amazon as being officially out on July 8, but there’s a possibility they might receive their stock sooner, so keep an eye on it. Actually, already Amazon’s page lists “New and Used” copies available, so it looks like somebody else has already received advance copies!

I hope you enjoy the book!

Congratulations and a massive thank you for bringing us a long needed coherent explanation on these aspects.

Allthough I am still in the progress of working through your book ‘Introducing Character Animation with Blender’, I am eager to get my hands on he new one too.

I’m still reading your other book but I’m sure I’ll get this one soon!

Will this book also be available in the Blender.org e-shop ?
Those pictures really convinced me, cant wait to order mine.

Congratulations on the relase Tony. Allow me to post these links

The book on Amazon: 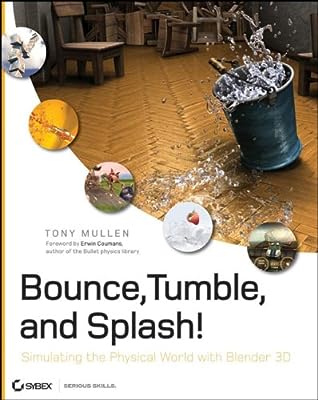 Learn all about Blender, the premier open-source 3D software, in Bounce, Tumble, and Splash!: Simulating the Physical World with Blender 3D. You will find step-by-step instructions for using Blender’s ...

Your “Character animation in blender” is IMO the best Blender book available. Thanks for writing that and a huge thank you in advance for writing this new book - which seems to be even greater.

Thanks for the responses! Actually, I just looked at the Amazon page and sure enough, they’ve bumped up the release date to June 30.

As for whether or not it will be available from the e-Shop, all I can say is that I hope so. This depends on a number of factors, but I think mainly whether it turns out to be cost-effective for the Blender Foundation. The book’s published in the US, which means it needs to be shipped overseas before being resold. This isn’t really something I know a lot about, really. Ton is aware of the book, of course, and I’d certainly be pleased if it works out that the e-Shop can carry it.

I’ll let people know if I hear anything about a decision on that.

Congrats Tony! Your first book was awesome, but this looks even better! I especially like the look of the colour screenshots throughout. Thankyou once again, onc I have enough money i’ll be ordering this

Congrats, i have just ordered the creature factory so wont buy this any time this month, but will keep my eye on it, and hopefully will be able to get my hands on it sometime around.
looks very good, though.

I’m excited to see this book finally saw the light… I’ve pre-ordered mine, but it say that even if it is going to be out in June 30 I’ll get it in July 25…

Into my Amazon wishlist, along with the character animation book. Come on Payday!!!

Nice to see the upswing in third party training for Blender…

Funny, looks like Amazon has caved under pressure! The book is now listed as “in stock on June 21”… so people should be getting it even sooner than I thought.

Congrats bugman_2000, yet another book of yours that will be truly fantastic for the entire community.

I can tell you have the book bug, so keep them coming, your work and effort is a real asset to us all.

Hey Bugman! Can I have a copy of one of your advance copies? For free? I’m ten and my dad already bought the first one but the first purchase should cover the second! sigh

That is really wonderful to hear. Thank you for all your labors on the book Tony!
I’ll look forward to reading it hopefully next week.:eyebrowlift:

Oh, and after looking at the pictures on Flickr, is the group photo of the Peach team
an edited version? (no red-eye, teeth glare spots)

I can tell you have the book bug, so keep them coming, your work and effort is a real asset to us all.
Thanks. I will. Actually, I can tell you that there is another one currently in the works that I’m very excited about. I’ll let everybody know more about that project as it develops.

Hey Bugman! Can I have a copy of one of your advance copies? For free?

I’ll have one waiting for you. Let me know the next time you’re in Tokyo to pick it up!

Oh, and after looking at the pictures on Flickr, is the group photo of the Peach team an edited version? (no red-eye, teeth glare spots)

Now, that’s a pretty left-field question! Actually, I think they sent me a touched up version. But do me a favor and don’t dock the book a star on your Amazon review for teeth glare spots on the Peach group photo, okay?

congrats! I’ll buy this one as well!

Now, if we can just find someone to write a good book on Blender Python.

Now, if we can just find someone to write a good book on Blender Python.