I made this level for a mini game cartoonie style game. I dunno, I was board and thought I would test something out, and it turned into this.

If someone wants to, I can work with them to make this into a simple (and fun!) mini game. I can’t do to much because of The Fall of Lamron, but if someone wants to do some modeling (the bad guys and the main guy) and scripting/logic bricks, this could be cool.

We need ideas what it should be. Pacman, where you collect bead things, or you kill the bad guys? what?

It should also have a high score, AND IF POSSIBLE, it shows high scores with other players online, but the game itself is not multiplier.

Enjoy the screenshot. The sphers are temp, just an example, and the cube is also temp, to show you the main guy. The positioning is where it would be in game.

DONE THINGS:
Modeled landscape, trees, etc.
Made Bad/Good Guys
Made a Sphere
Make the main guy able to move around
Auto restart everytime object hits water.
when you go over a spear it dissappears and adds to a # on the screen.

NOT DONE THINGS:
the enemys to move around, on a track for example.
when you get close enough they turn toward you and shoot.
you can shoot the enemy, but not as close as they acn shoot you.
once you get hit (or hit an enemy) they/you freeze for a X amount of time.
Once you get all of them you win.
A time limit
A high score.
Better Jump
More accurate shooting. 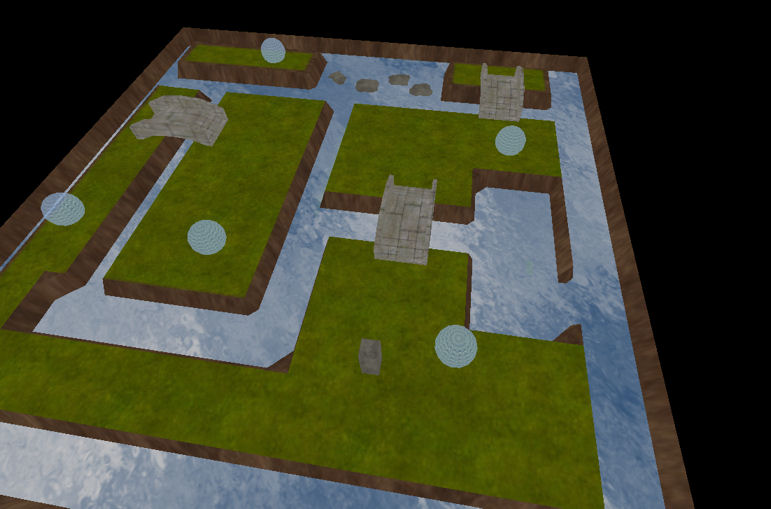 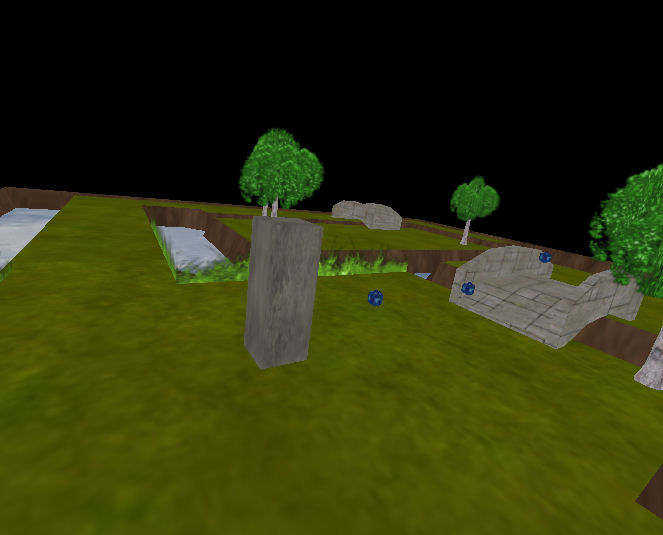 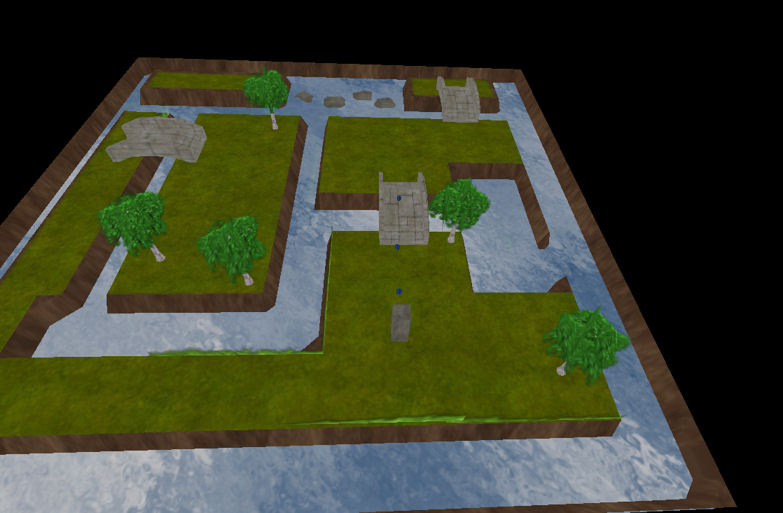 Here is an update. I made little bead things that you’ll have to collect, added trees (About 40 faces ea.) and some grass here and there.

Nice. I like the trees, maybe they could look a little better being darker.

we could use this a a minigame! Somewhere.

Nice scene! I love the water! How did you make it (the water)?!?

I made the texture in photoshop (when I had the trial). That’s all, it should be a little transparent. hmmm…

curly, it could be, but this is more like a arcade game, like pacman. I don’t know how exactly it would fit into lamron.

you right, just making some speculations.

I know, and that’s run though my head too.

I dunno maybe random things pop up at random times in lamron and ask you which minigame you want to do. But to prevent this thread from going off topic,

I might figured out a cool way to do trees, make the green stuff one plane, and use a “track to sensor” so the tree will tilt towards the camera…I havent tried this yet but if you want to go ahead.

And also if you wanted it to be cartoonie, you could duplicate the whole place, make it all black, and flip the normals to make a cartoonish outline.

ok, i dont know about the outlines, i like it how it is, :D, but thanks.

Here’s what I’ve got, is someone could do come coding. it should be that hard.

Goal: Collect all spheres with out dieing.
Time Limit: 2 Minutes
Bad Guys: 6
Spheres: 30 (may change)
Stung Time (on bad guys) 30 seconds
Description: Collect all spheres in 2 minutes or less. Watch out for bad guys; they shoot laser-sphere-thingys that stung you for 15 seconds. You can also shoot at them, but their range is much longer than yours, and your range is shorter.

here are some concept drawings. I think i like the box(s) the best, but both good and bad guys, what do you say? 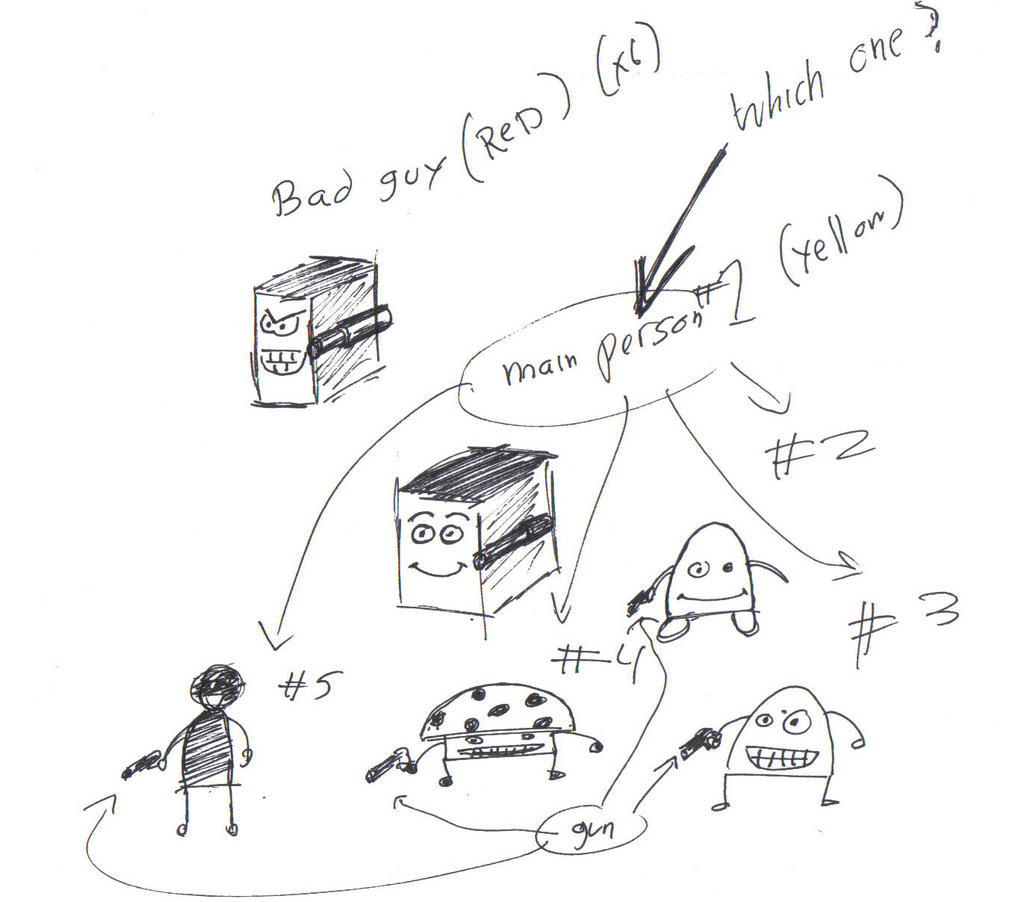 Here are my characters

Could someone help me with the logic bricks, to get the guy to move around (and not bounce back when hitting something or going up a hill!) and when he turns the camera also turns. Thanks. 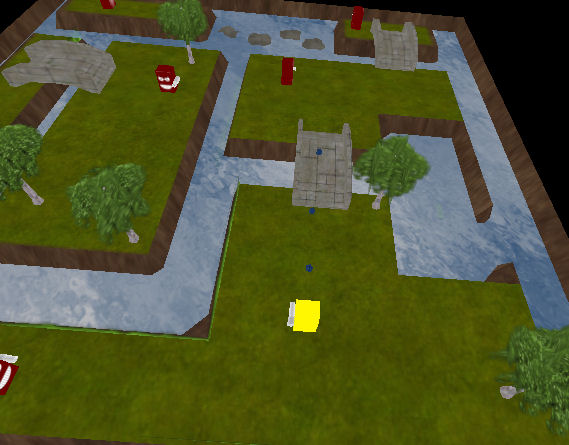 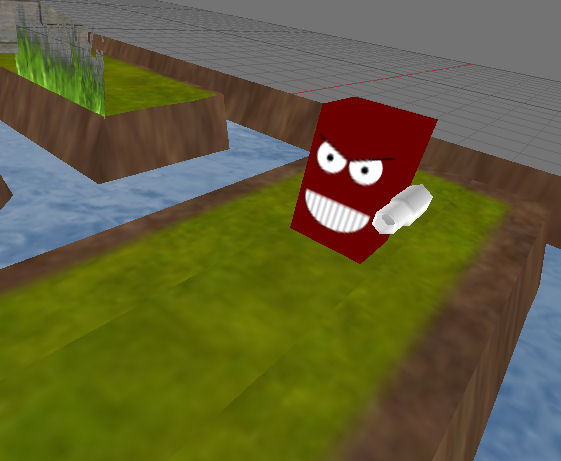 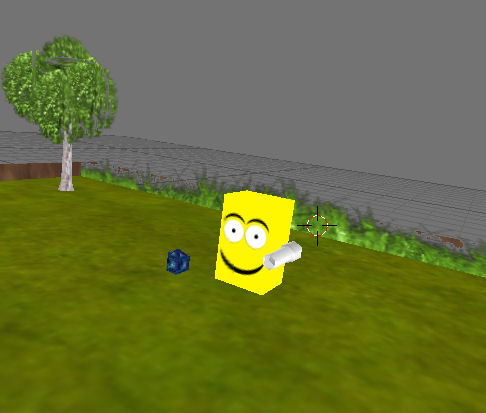 the enemys to move around, on a track for example.
when you get close enough they turn toward you and shoot.
you can shoot the enemy, but not as close as they acn shoot you.
once you get hit (or hit an enemy) they/you freeze for a X amount of time.
when you go over a spear it dissappears and adds to a # on the screen.
Once you get all of them you win.
A time limit
A high score.

thanks! please someone help.

Sorry for all these posts

but I need help.

In camera view, when I hit “P”, it’s all black, but if I am not in camera view everything is fine. What’s wrong?

Next I am going to try and make it when you hit a sphere, it dissappears next.

Does Boxman have a girlfriend though?

if you send me the blend, I can mess around with the logic bricks until it works better. I have had all of those problems before, and I know how to fix them

Ok I’ll send it to you. It’s just the camera I’m having problms with, really.

Also can you do some of the scripts, it shouldnt be to hard

i’ve seen the stuff you can do

I really need to get this game out this summer (or fall), I don’t want to sound rude, but I really need one to do the programming. Check post #1 to see what needs to be done, should be simple. This is a mini game