Hi, there.
I’m about to call this one finished. Suggestions whould be welcome, 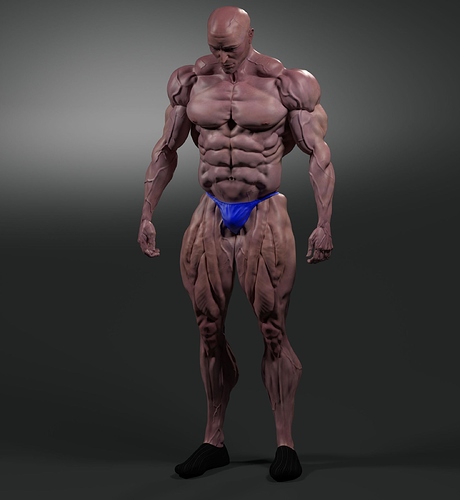 If you call it finished, why is it in WIP section?
It seems looks pretty good sculpt and you certainly have anatomy knowledge, but the composition is quite bad and overall image (more specific: shading, lighting, texturing, camera angle, composition again…)
Compare your render with this and you`ll see what I mean.

Hmmm. Looks more like flayed guy, especially from the waist down. Put some skin on him.

Other than having 0.00% body fat or skin thickness, the collar bone area looks to be too flat.

@AlinB, I said about and suggestions that’s why it’s in the WiP section. Other than that, you’re right: it needs more composition.
@Orinoco, he should kill me if I put more skin on him. Unlike sumo fighters, this kind of guys, and gals, compite to show muscle.
@Ryeath, it’s true. I have to retouch the clavicle area.

@Orinoco, he should kill me if I put more skin on him. Unlike sumo fighters, this kind of guys, and gals, compete to show muscle.

He can’t kill you, he’s already dead. No living person can survive having that much skin removed to show muscle definition. Seriously, study your references. 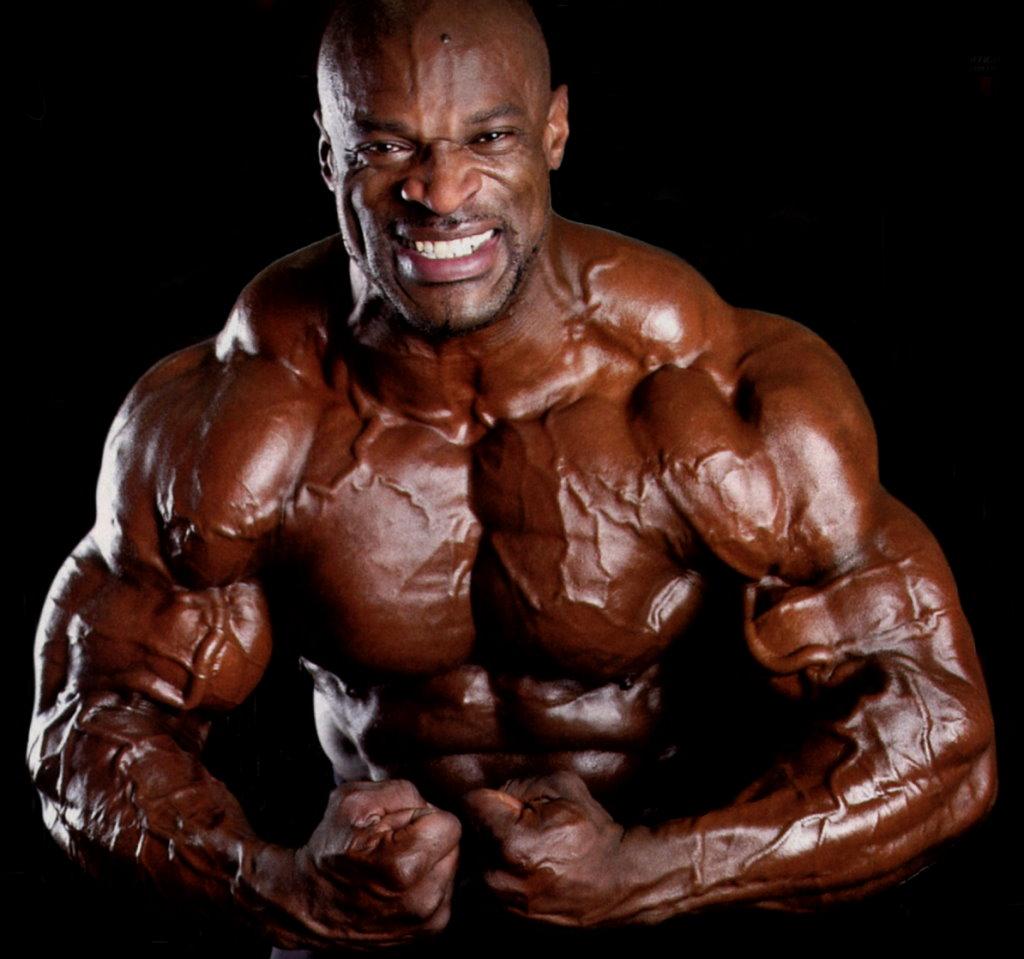 I did mention “from the waist down”, didn’t I? Ah, yes, I did. I’m quite familiar with photographs of hyperdeveloped competitive dudes and dudettes, and you did ask for suggestions. Despite the dramatic lighting, even your smiling ‘angry dude’ does not have the kind of deep crevasses between his muscle forms that you have put on the legs of your model. Are you going for realism? As it stands, you aren’t there yet.

@Orinoco, this dude here,
[ATTACH=CONFIG]288668[/ATTACH]
thinks you may be wrong. That’s why he seems a tad angry? I’m a coward: I whouldn’t oppose him.

Yuck. Got to “love” people that want to be ugly - how body builders are… just… disgusting.

Shoveling off your example doesn’t correct a glaring number of issues.

I am not sure what you are tempting to do but first off your brawny guy looks like he’s got balls stuck under his skin for “muscle”. Each and every single muscle is rough, awkward and doesn’t flow smoothly in any sense of the word.

I’m not sure if you’re using an extreme body builder for a model or what, but try with standard body builders and then build up the muscle from there. Otherwise is looks well… artificial. Not even human really.

Second the abs and stomach ??? what exactly is that supposed to be.
Since you grabbed Ronnie’s photo, I’ll give you a full body image 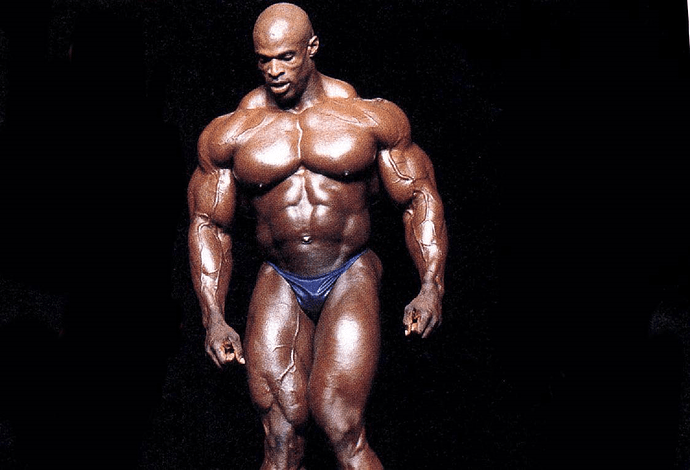 Finally - fix the legs. Some of the extreme bodybuilders like Phil Heath and Jay Cutler look like freaks if that’s what you’re basing your model off of.

@Orinoco, you did mention specially fron the waist down, meaning everywhere but particularly…
@KuroOokami, 1.- It’s not my intention to shovel off anything, that comment is kind of harsh. Anyway, if that’s the conclussion that you infer from my words, I appologize.
2.- In discurssive terms, it doesn’t seem very clever stating that I have incurr in a glaring number of issues and inmediatly after expressing I’m not sure what you’re tempting (attempting) to do.
3.- You’re not sure if I’m using a bodybuilder as a model. I started this piece with the sole intention of having fun with an anatomical study, an extreme anatomical study. So, yes, I’ve been colecting a few images from Mr. Olimpia competition among others and I’ve build up a sort of Frankenstein muscly guy. A monster, yes, but an adorable monster.
4.- Using that same image from Turbosquid, whould you mind to be more explicit about how is that muscles are not so rough, not so awkward and lastly, in wich direction are those muscles flowing? It whould be very explanatory and usefull to correct my mistakes.
5.- You’re right, the abs need a deep retouching, but I cannot conclude that from the picture of Ronnie Coleman that you uploaded. Watch this and compare, I’m using and image of the same Turbosquid dude (excellent work, by the way), 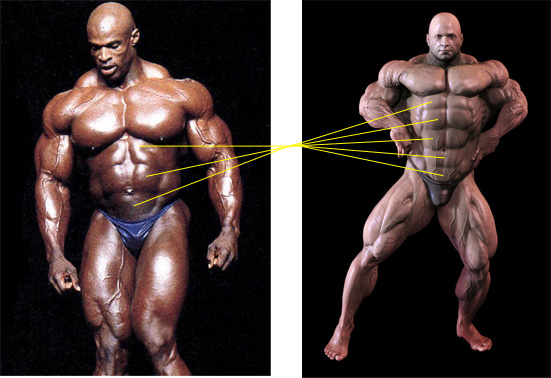 Now, wich is the norm? Whose belly is lying? Anatomy has gone crazy or is just a guide, nothing more and nothing less?
Finally, I do thank you for your inputs. I like people that express an opinion with some kind of argumentation behind.

An update of my monster after some retouching, 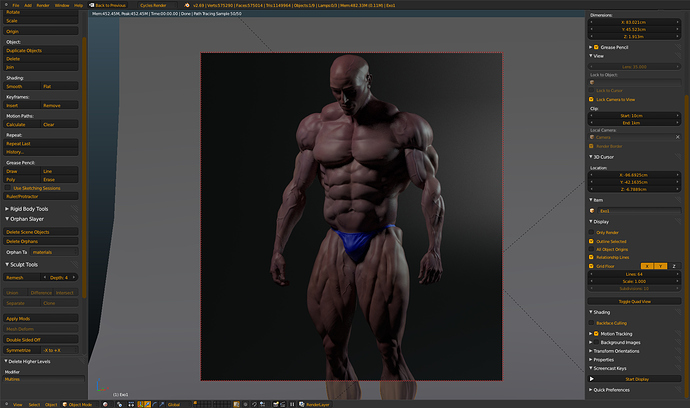 Very cool work, FranKChela! You don’t often see bodybuilder sculpts on here, so it is great to see someone putting time and energy into creating a really cool model!

Of course, one of the biggest challenges in such a project is deciding what looks correct and what doesn’t. The posture of each body part, whether the muscle is tensed or not, all affect this perception. On sculpt that will never be animated, you almost have to start with a specific pose in mind before the work of shaping the individual muscles can begin. So it is certainly not an easy task, but you’ve done so well already. There are many great details to take in, not to mention the hands and face!

I think the upper body looks pretty good. I will admit the legs do look a lot more lean/ripped than the rest of the body does. More important than that, in my opinion, is the face and forearms. To me, the face looks very thin, without the muscle build I would expect to see in the jawline. Also, it may just be the position of the arms to the camera, but the forearms look much smaller than I would expect. I feel a more massive forearm would compliment the impressive upper arms and delts quite well.

The skin shader also looks really good. Keep up the great work, I’m looking forward to seeing more. Perhaps a render showing the back muscles would look good as well!

Another update, back view, 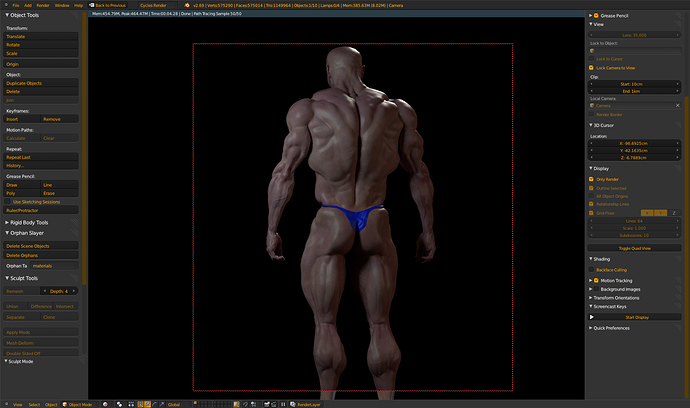