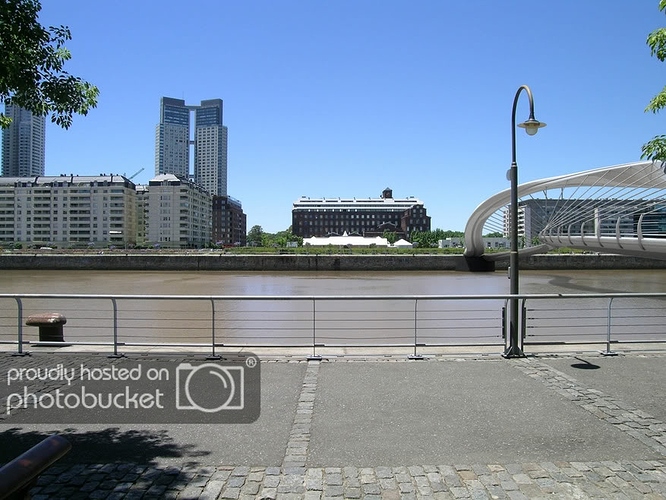 I was taking a walk in Puerto Madero (bsas, argentina) and while i was looking Calatrava´s bridge, called “women´s bridge”, I felt inspired, and here is my bridge

The design of the bridge is a suspended type bridge, looks like a adn.
The design is not finished, i´m not happy with it.
in the picture it looks wrong, too big a the top because it should be large to be there, so I scaled it, i did not re-sized it correctly.

The main arm of the bridge “spins” in the air and what was the top in one side, is the bottom at the other side. It was made with curves, taper etc…

I´ll keep the update these days.

Any kind of suggestion is welcome. 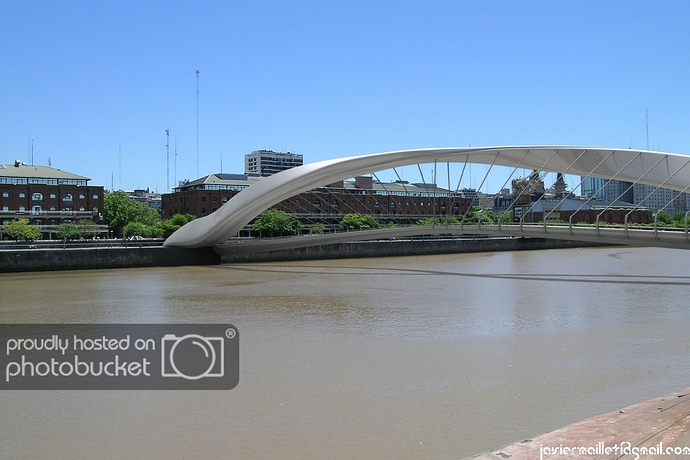 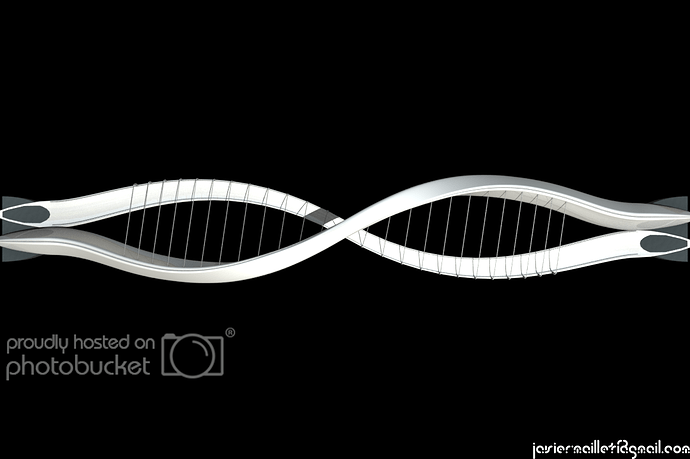 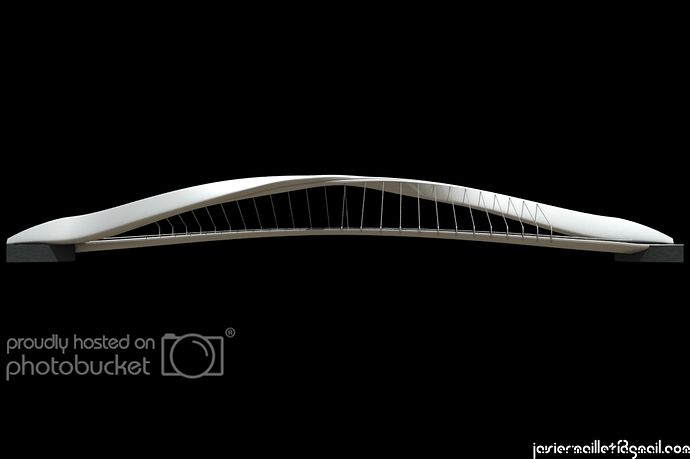 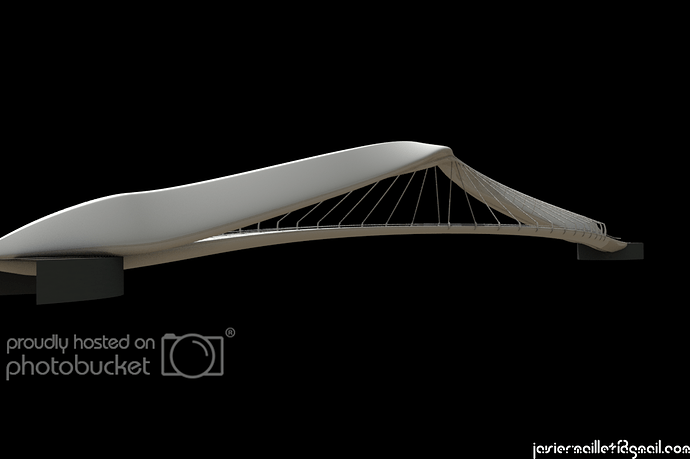 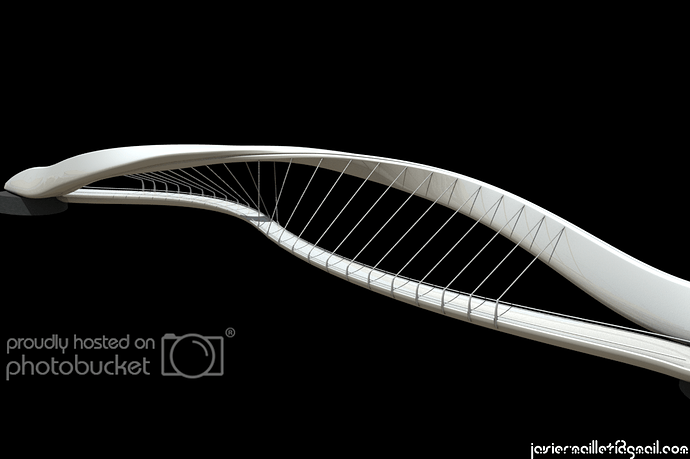 Hey, thats cool looking… Are you going to try for a composite image?

Isn’t the first shot a composite image? Maybe he added that later.

Thanks for posting all the different angles. I couldn’t visualize the shape well with just one.

That’s a very nice design. Have you any idea if it’s feasible in the real world?

Maybe it is feasible, but I don´t know how much it will cost.
Of course the first image is a composite!
I have to figure out how make it more realistic, feasible, and nicer

I love the last two renders. That’s a great angle to show off the shape. Could you do a composite from one of those angles?

I guess that by the end of the week it will be finished, and then we will shoot some video and composite via motion capture.
Now´i´m making an angular map of that place

It’s an incredibly nice bridge. Good design.
Great compositing too, except for the shadow on the water.

In real life I think you’ll have a problem in the center of the bridge.
I think the design of the top part won’t allow the weight of the hanging bridge
and it could collapse at heavy traffic.
P

thanks vliegtuig.
it´s a bridge for walking, not traffic

I really don´t know if it would work, but al least for now I can´t afford it to figure it out

I would perhaps put ths suspension members in the inside of the curve of the pedway instead of outside. Unless the arch is a decrative feature and not structural. If they are on the outside all the weight will be born by the curved portion of the suspension member (not to effecient). You could instead have that born by support beam under the pedway. You could if moved the support to the inside curve connect that to the lower curve of the arch to keep the spiderweb effect. You could of course do both at the same time. Perhaps run a curved piece over and a straight piece under.

From an engineering standpoint

There are more loads on a bridge then just the pedestrians of course. Wind for one. This is a big factor in the engineering of the bridge. As this is perhaps quite a bit greater then just the people walking on it. With that in mind you may want to make the arch a bit more wind friendly. Depending on the recorded wind speeds and direction at the bridge location. These are usually exceeded to a degree. The overall wind speed for the city (it’s maximums is usually a good judge). They will use the higher of the speeds for the engieering of the bridge.

The change in the design would not include altering it’s shape just the structure. Basically you have to cut out the Bernoulli effect (wing). You can use aircraft design eliments to counter this or you could change the arch’s structure to compensate (open it up a bit more) with slats. You could of course have an entirely open structure (space frame). This would eliminate the Bernoulli while still maintaining the shape of the wing.

Another good source is that of Coasters. It is much like that in shape.

If you don’t give the wind the room to move through the structure it will want to move the structure. This will force you to add more support to hold that movement at bay.

There is a whole cost/benefit analysis that happens. The amount of material in the superstructure versus the cost to build a more complex structure to reduce the materials. A bit of balancing act in many cases. Labour vs Material. Many times a pedway is used as a demonstration piece for a larger engineering project.

That said it’s quite an elegant design. All of the thoughts of cost are mitagated by the actual looks of the bridge. This one is very impressive. There is a certain amount of community pride and engineering skill being shown here so that is also part of the equation.

The “Trick” if you can call it that is to use the forces for you in your design. As well as hiding the structural parts you find unattractive. You could hide the added structure of the bridge in the pedway. Atleast cut the load baring to a percentage of the total load. Part of the load is born by the arch and the other by the pedway. Bernoulli is at work on the deck aswell - just not as much as on the arch. This effect is the result of the height above the water surface. Air can’t move below the surface of the water so it will want to squeeze through between the surface and the deck of the bridge. You can use this to your advantage in the arch (as you may be doing already).

It’s quite an impressive design and good render and composit. With a bit of engineering you could make this into a viable design. I wouldn’t discount the concept of sending it off to the city for concideration. Not knowing your city (goverment). In the city I live in often there is a compitition for such things.

I think it’s great design too. Beutyful bridge. It looks like a DNA string if you look at it from the top view.

Im not a designer nor engineer, but looks awsome, real out of the box design, could be cool if it was build, il go and see it just for the design of it, and for me it looks feesable to build but like I said, im not a engineer, so dont know that much about load at stuff on bridge, but great design