After few hours of modeling the hull, test render of material came. I was not satisfied with the look, so I went to unwrap it on my own. Terrible work. I hope it is correct, or I will just… I dont know.

I just realised that I will need colors to identify which part is which. So, this is the progress so far.
ps.: I am also a plastic modeler and few minutes ago I asked one guy, how big is the UV texture he used. I was not kidding. I realised it just few minutes ago. This disorientation must be called somehow :eek:
Bad texturing: 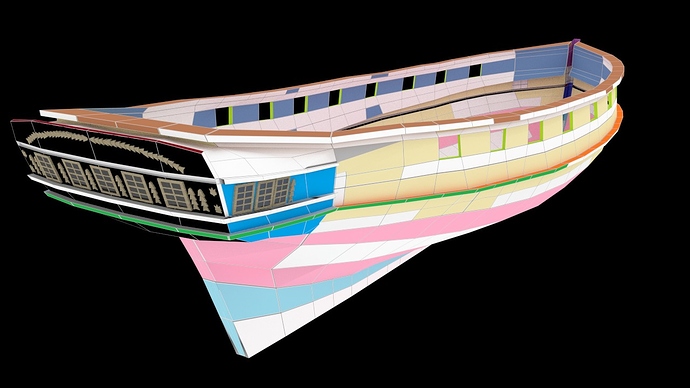 Test UV map - so I wont get crazy, which part is which 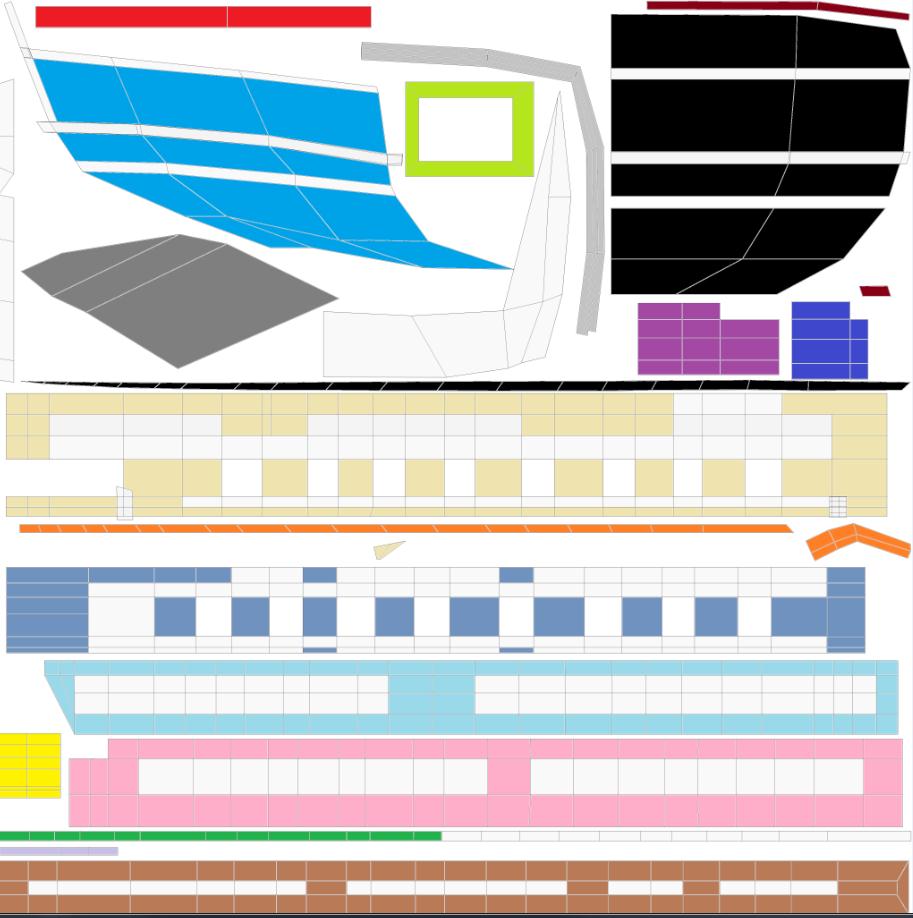 Nice start - You may need to increase the poly count to get a better shape. Have you used a Sub-Division Surface Modifier? You might like to look at that, also bear in mind that when you position the UV map on the texture image that you can move, scale and rotate the various pieces in relation to the image to get different effects.

Keep up the good work, Clock.

PS when is your 17th Birthday? - you may need to update your signature by now…

If you let me give you some tip: at this stage try to concentrate on the smoothnes of hull. Forget the textures. As an example I show you the hull of dutch smack:

Just after I had finished modeling I started covering the body with the textures. Planking was horrible so much, that finally I decided to cover entire hull with plain colours. I really admire that you decided to build a sailing vessel. Believe me it is much, much more difficult to achieve good results like with power driven vessels

Anyway - keep working. I am going to follow your thread with attention.

Let me show you few examples o my work:

Believe me, I also started from the beginning… So, good luck!

No, I have not used subdivision modifier for this model yet. I will see if I will even use it. Now, I would like to get the actual shape without modifiers. Redone few parts of UV map so it can work better. This is the progress so far. Maybe I will give it also a next strip to make it look better.
clockmender - Iam 17 on 13th February, so there is some time left to it.

lothar79 - Your models are really good! They look very realistic and the shaders are also beautiful. I do plastic models of ships, but there is not so much time now for it, so I will try to do this instead of my next ship - which I still have not decided it will be. 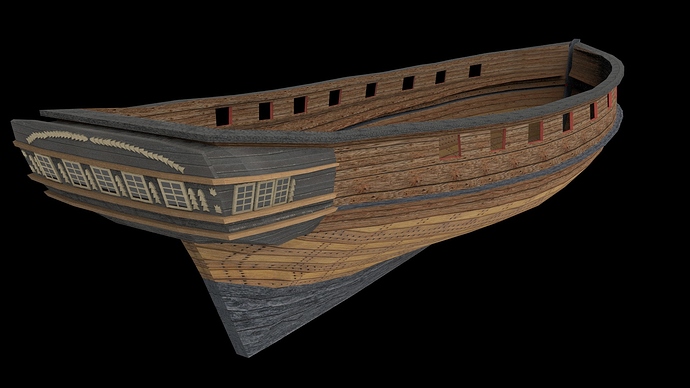 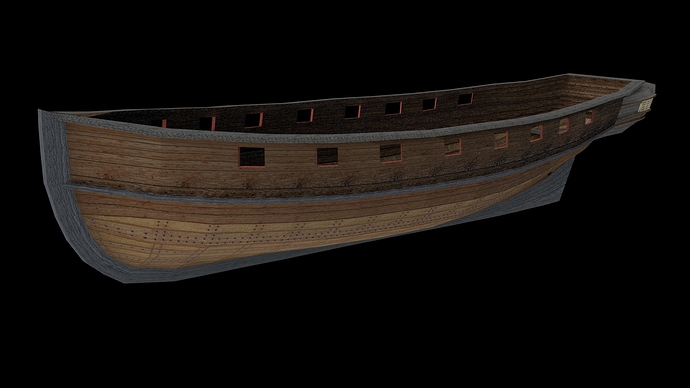 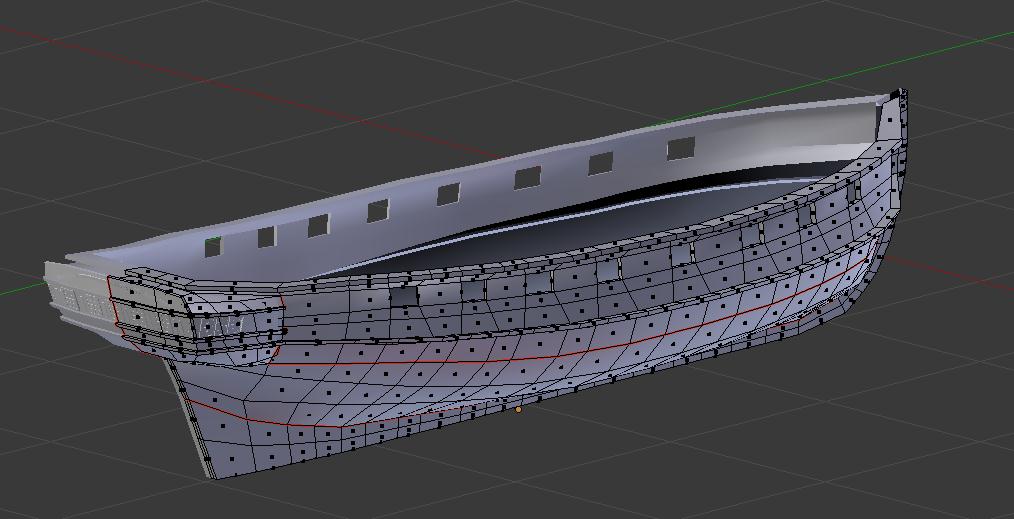 This is looking very nice now - well done! Perhaps just the odd sharp corner to round out to make the lines a little more flowing. Remember on the original ship the planks would have been steamed and bent over the ribs so this will produce nice flowing curves, without “corner” type bends.

I think it’s a good start. I’d have to agree with clockmender, starting with a very low poly block and applying a sub-division surface modifier is an easy way to get a good smooth shape much quicker than push/pulling every vertex.

I also agree. Try to apply Subdivision surface modifier at level 1 and your model will look smooth and nice. On the other side, working with this modifier gives you excellent flexibility in shaping the hull.

Yeah, it is true that when you apply the subdivision surface modifier will really help you to get the actual shape of the hull nice, but I aim for game poly count. Maybe I will apply it later, but if I wont be able to get the shape good without modifier, I wont get better. I just feel good, when I am able to make my projects still less and less memory and cpu intensive

Last but not least, Iam little bit time - limited. I have to finish 3 projects until 20th February, so I can test myself and put it into one competition - which is not currently aimed for 3D, but for design, so rather than winning, I want to test my abilities.

ps.: Now Iam happy that I got this nice effect on the first image. It is done with RGB Curves and Roughness of the Glossy Shader. Maybe it is time to make some details on the hull 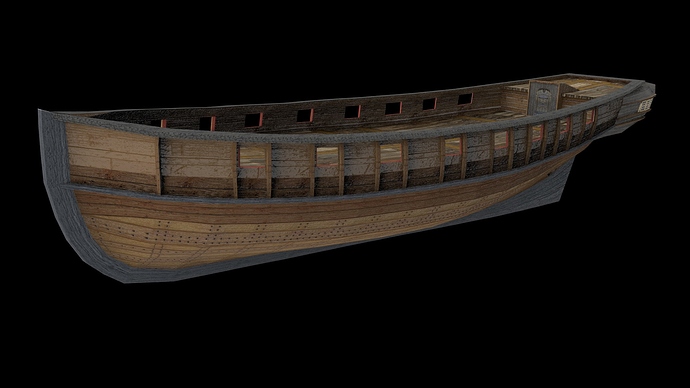 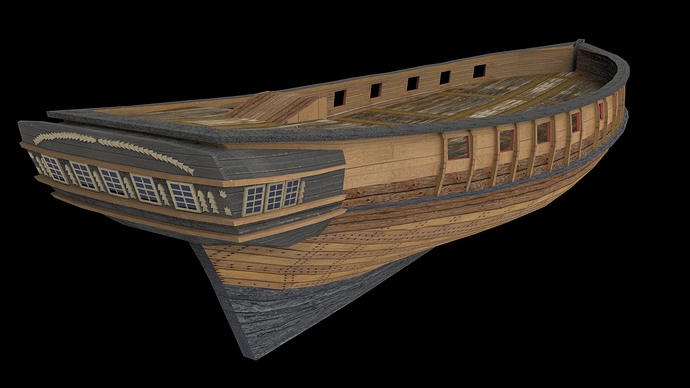 I aim for game poly count

That explains everything. No more comments from me

So few more details today. Added some wood planks, made a cannon, lantern,barrel and gave the ship a name. Alice. 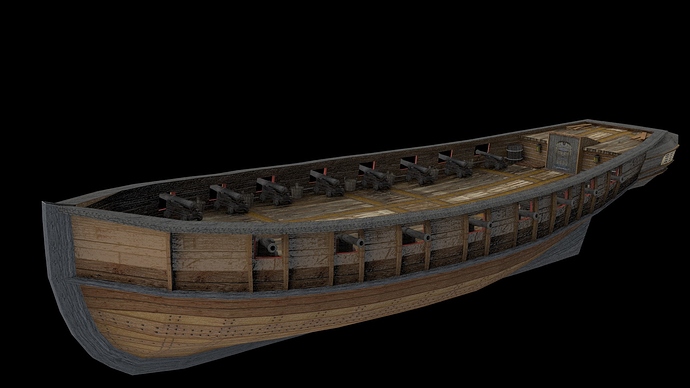 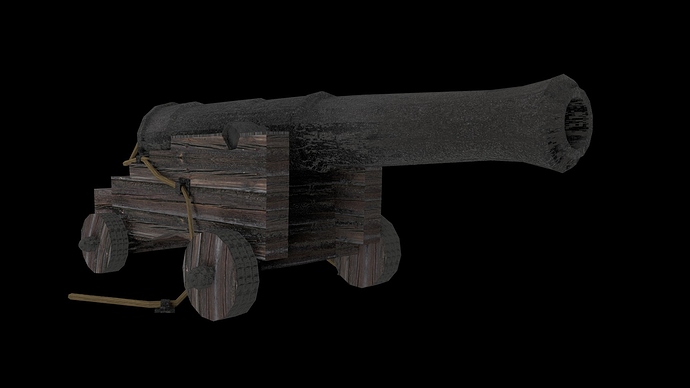 The next stage of this project. - this sentence starts to be typical for me… 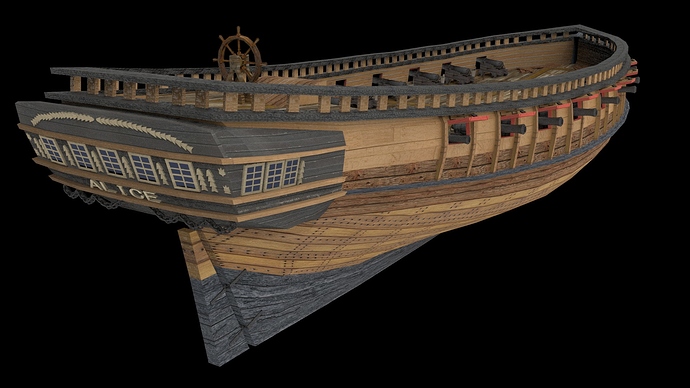 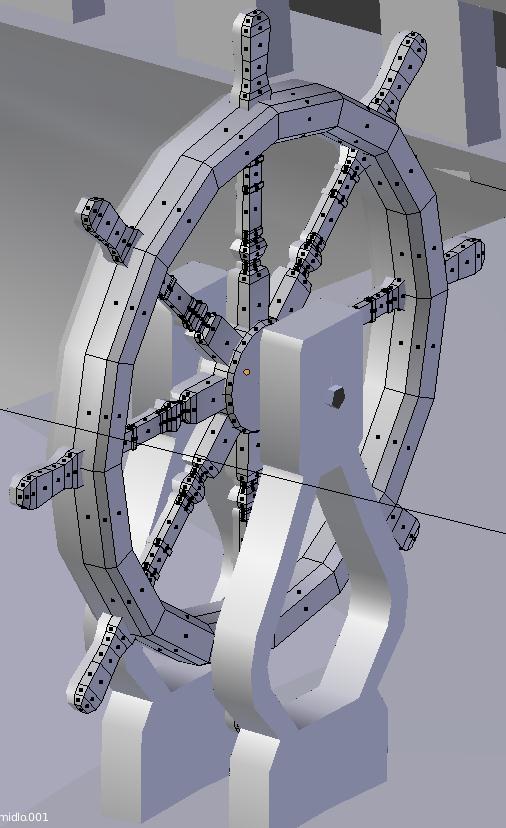 After a very stressing day, finally I could relax and continue on my ship 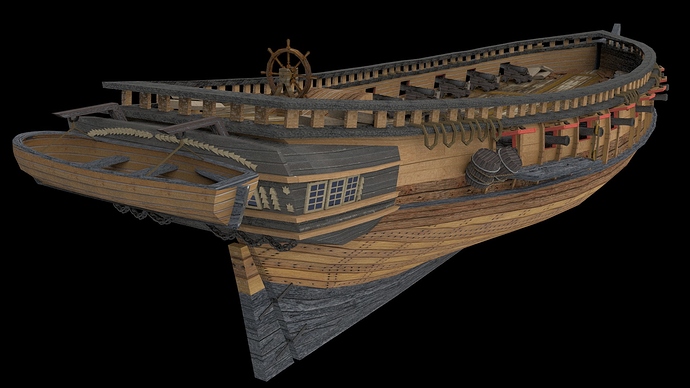 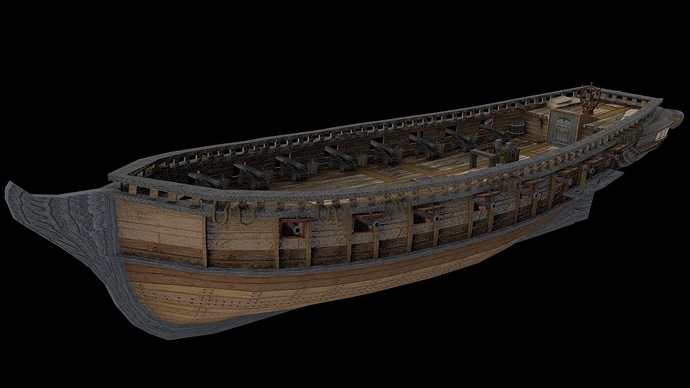 So today I spend almost whole day on this.Altough not finished I made first two test renders. Been wondering which one is better. If the one with volumetric lighting or the one without it - but with visible details. 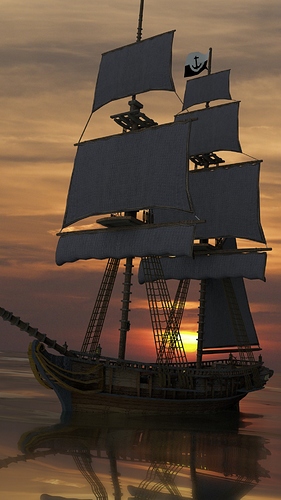 I would have to repair few mistakes I ve realised just when I rendered it, but this is how it could be. 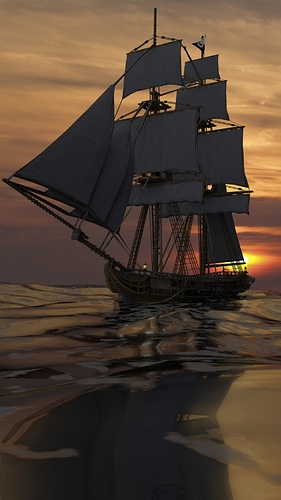 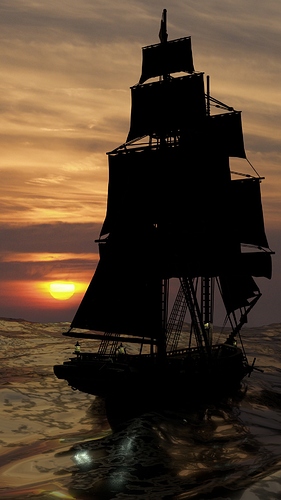 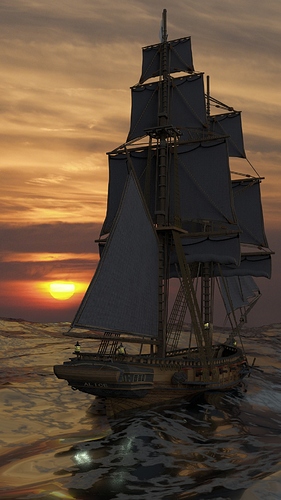 Maybe the sea is perfectible, but I love the black one when you only see the shape with the orange sun, very nice. For the others I guess you have to make the materials better, but overall the ship is cool

Thank you for comment. I tried to make the sea better, dont know if I ve succeded, but definitely spend next hours tweaking it

. So here are 3 more renders. I think that it could be finished. Maybe I could add there some birds, but thats all I think. 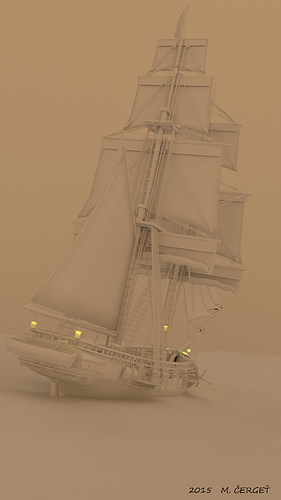 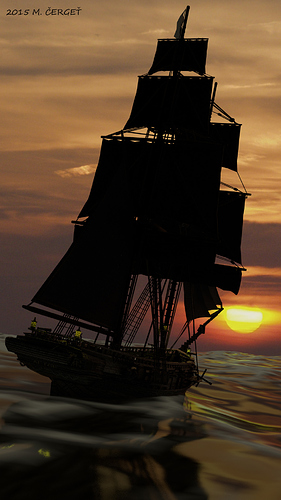 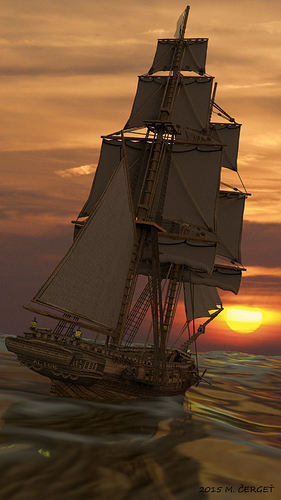 I could not let this project as it is, because just a captain was not there. So and not to waste time I also upgraded the material of the ship. 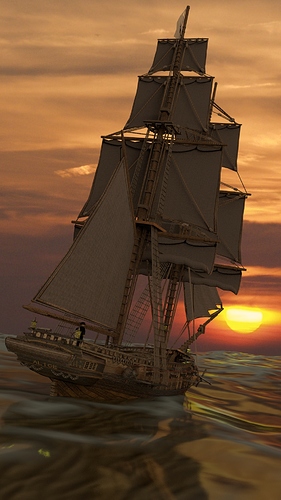 I don’t like the new rope’s material… it’s more ‘bicolor’ at some places and is less realistic, imo. 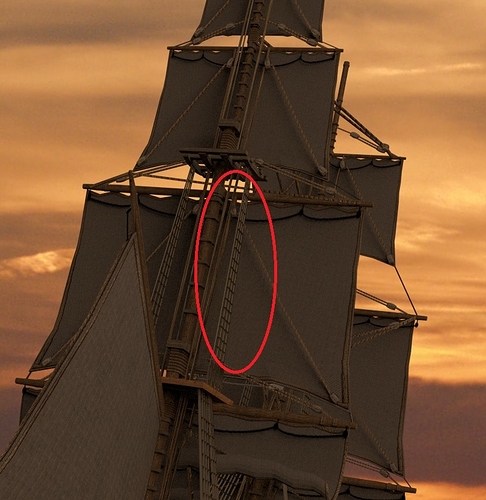 Crazy thing about this is, that render time is now 3 times bigger than it was on the last picture - and just because of the upgraded material of sails. And the craziest part is that the only difference I see is the small rope shadow coming from the other side of the sail. 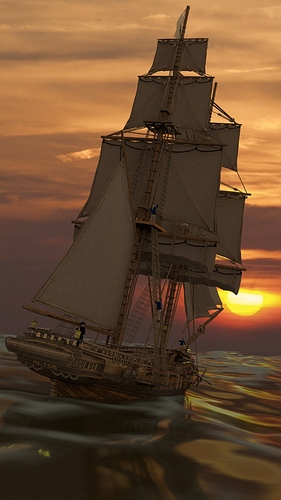