Hi guys! I am trying to build a basemesh for sculpting busts. I know that the edgeflow might seem very experimental, but i think in some places it builds a better canvas for detail than the standard flow. I am not happy with the ears and the varying density of vertices on the head! please give feedback on the topology. I appreciate it

conscious decisions were: the edgeflow around the eyes (unusual i know) but i think it aligns with the reases and fatpockets more nicely

mouse and nose are pretty standard i think that is ok

thx for the feedback in advance and happy blending! 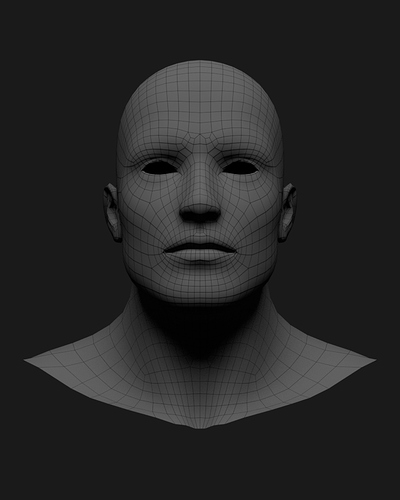 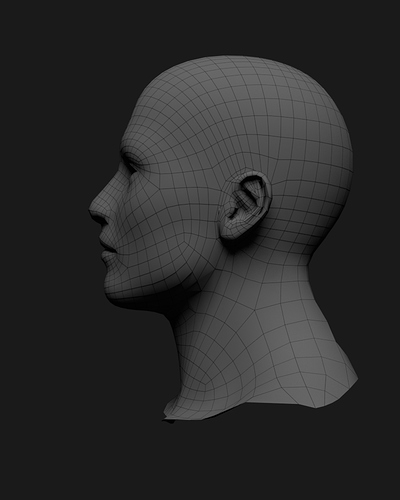 It would be nice if you could eliminate the dark shadows in the render but it looks excellent to me.
The outside corner of the eye did indeed catch my … eye, but if it makes sense to you, give it ago. I don’t think you need to follow any “standard” flow.
If the mesh was also meant for animation then maybe the eye corner won’t work well but for sculpting I think it will do a fine job.

Quick update: Blender decided to trick me and viciously destroyed all my work on this piece. NEVER CLICK APPLY BASE IT IS A TRAP!!!

After crying a lot. I started working on v2 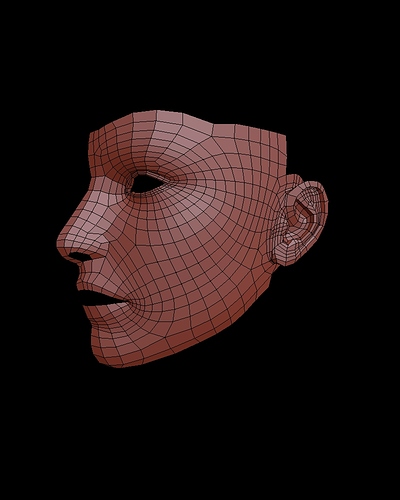 v2.jpg800×1000 187 KB
Since i got a feel for the last topology by sculpting on it already, i was able to improve some areas from the start. The eyes worked pretty nicely, so i decided to go even more extreme

Let me know if i went to crazy there having two poles side to side there. I guess it might come back to bite me, but if not this would be my dream edgeflow. Happy blending!

Hey, a little advice- Blender’s save feature has an iterator button that’ll save a copy with a number-- it looks like a plus next to the save button.

Other than that I should probably be asking you for advice! I’m sorta doin’ the same thing but lower-poly.

I actually didn’t know about that feature! I kinda trusted that a blend1 or blend2 file would save me, but i saved to often in the process

ask me anything if you want. I can tell you this much: This topology would do pretty horribly for animation

Well, if it’s a sculpt, you shouldn’t worry, animated meshes are supposed to be lowish poly anyways, so you’d still have to do some retop. Now that I look at it again, I think the topology there on the eyes is worth a try-- that part gets all wrinkly anyways so it may be better to have something “unusual”-- I’ve heard of people even doing things like using Ngons to control the way things get triangulated at render time, because they liked how it looked. Not suggesting you try that, but have you ever noticed how bad topology looks ugly when it renders, even smooth shaded? That smoothness-breaking may be something you can use to your advantage if you know how to control it (like that one guy who uses Ngons. Forgot his name).

The reason I was doing it lo-poly (like 16 verts around the neck I think, the head is actually the only part I haven’t got done. Freaking ears are keeping me too scared) is because a) dyntopo is awesome!! awesome! And b) I’m probably gonna re-top it anyways, and of course, c) even if I don’t, fewer polys are easier to quickly edit. Since you’re doing human busts, a moderate level of detail is probably OK. I wanted something I could quickly turn into an orc or a dwarf or an alien or whatever. But if you want a basemesh you can easily take from male to female and back, I’d go with a lower level of detail-- after all you’ll add it right back in on the sculpt. Oh, and lower poly meshes are quicker to rig and animate (not necessarily better, just easier), in case you wanted to pose it before sculpting.

Not suggesting you reduce the polys (just giving my reasons), it looks great like it is. And anyways, I always improve every time I do a new topology, so don’t be discouraged about doing it again! It’ll just make you… even better than me lol.

another feature you may like-- near the bottom of the 3D view, to the right of the magnet (snapping options), is an icon with two arrows pointing at one another. (it’s between the snapping options and the OpenGL render buttons).

This is the auto-merge vertex feature, which automatically merges vertices when you put them close enough together (there’s a threshold you can set somewhere). I used to be so irritated with how slow ctrl-m was, but since someone told me about this a few weeks ago, I haven’t really needed to use it. It’s awesome for my workflow. I don’t know if you knew about it or not, but I didn’t so I figure why not share.

Duuude! That is so awesome. I didn’t know it existed i always selected the two vertices and hit Alt + m. Thank you! I will try it on my next mesh, since i am almost done with this one. (I have the whole face and neck now but will probably look for some small fixes). Updates soon! I hope you critique the hell outta version 2 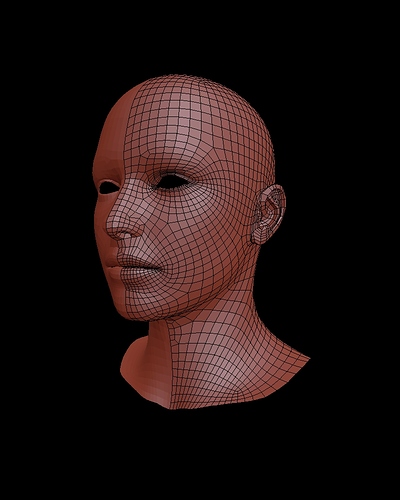 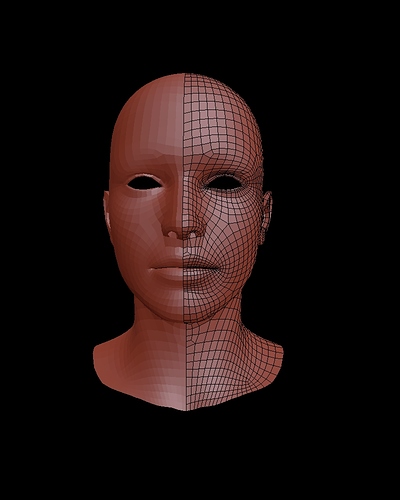 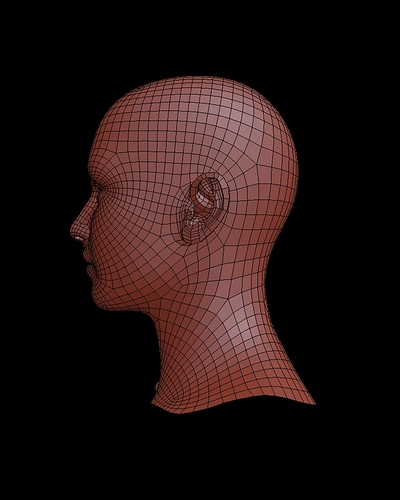 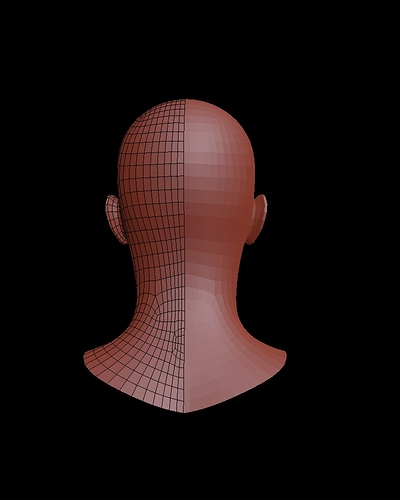 I like what you did with the edge flow around the ear, it’s easy to make that part messy. I’m interested in seeing what the pole above the inner corner of the eye will do (might be tough to sculpt it, but you can use those areas to make wrinkles and such). If it doesn’t look right in the end it’s an easy fix. I think the edge flow is good in general, at any rate it looks like they follow the muscles and will easily fit onto a body) provided it’s a high enough resolution. I don’t think it matters if the faces on the back stretch, the skin stretches there after all. The circular shape on the front and back of the neck (larynx and first thoracic vertebrae (I think)) might be a little overkill. There are a couple of things I don’t like about the nose. The first is just a nitpick, but the side of a person’s nose usually curves back in on itself as it reaches the cheek (basically, there could be more of a crease there). The second one needs to be fixed-- people’s nostrils don’t go right down into their lips like that, there’s a little bit of skin there.
Here, I linked a picture underneath. At any rate, you presumably have a nose so you can just hold a mirror under your face or something…

Let’s see, the pole hidden in the top of the eyelid is cool, see if you can’t use that somehow to model epicanthus folds (you’ll have to move it over some). It’s a good thing to have all those loops there for eyelids and expressions etc. Make sure to actually try putting an eye in there, there’s no point in having an eye socket if eyes don’t fit in 'em! There are a couple things in there I might borrow for my next re-top, like the ears!! and the edge flow around the neck. Overall, it looks nice, and I’m impressed you could keep the size and shape of the faces that neat. It’s very clean and the size changes are all gradual.

Meant to get bak to you on that sooner, but I just got a new job this weekend so you’ll have to forgive me for being a little slow.

aww, it got ruined! lemme try embedding a picture:

At least I think that’s true-- Most noses are shaped like the above. 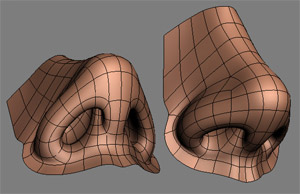 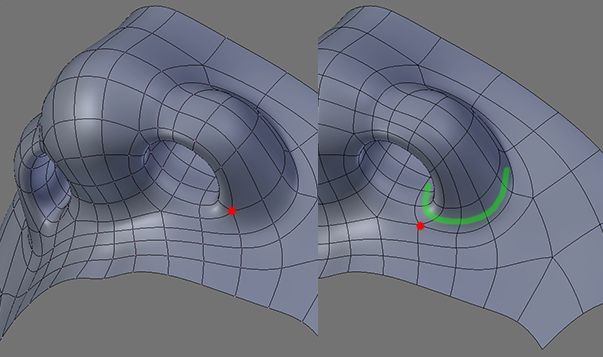 I can’t edit the post above for some reason, but anyways, in the yellow/tan model, notice that the nostril has a loop of skin underneath and the side of the nose (the nares? Nare?) meets the face at an acute angle. The other one is bad because the nostril just goes right into the lip and meets at a 90 degree angle. Notice how much more cartoonish it is? My nose looks like the tan one, except the weird part in the middle, (but it doesn’t look bad), and I think there are very few people whose noses look like the blue model. I could be wrong, maybe it’s like attached/floating earlobes?