For bump maps, which way is it? Do the highlights just out or jut in? Shadows?

I believe you have a choice (although I may be wrong, haven’t used Blender in a while).

But it also depends on what Renderer you use. For example, I believe Yafaray is the opposite of Blender Internal.

You can use a negative number for the normal value to get your bump map to go the other direction. 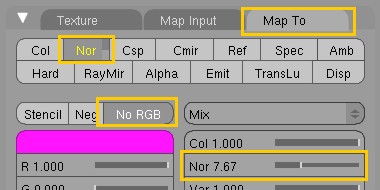 Yes, but then tangent normal maps and bump maps are poles apart. The bump maps are height maps in the greyscale sense whereas tangent normal maps make each point of a surface rotate so it catches light to make is appear that the surface of that area is at a particular angle. They create angle data through colour, simulating as though three primary coloured spotlights were coming in from different angles. I once did an experiment where I took three photos of a coin with the light from different angles, then put each angle through a coloured filter (done in Gimp) before combining. The result was a working normal map which made a 3D version of my coin.

Three shots of the coin, lit from different angles.

Normal map of a cone done to figure out what the approximate colours for a normal map are.

Gimp used to add colour to each layer. My method for doing this, as with the blurry photos of coins wasn’t even accurate.