This is a project for a friend of mine. He wants to make an album cover with a burning piano in the middle of a downtown city street… and not get arrested.

Here’s what I have so far. Modeled in Blender, textures are all hand painted in Photoshop. This render doesn’t have the reflection maps or bump maps on it.
I’m going to take it in to maya to use a shader to bevel the corners and use Maya fluid effects for the fire. 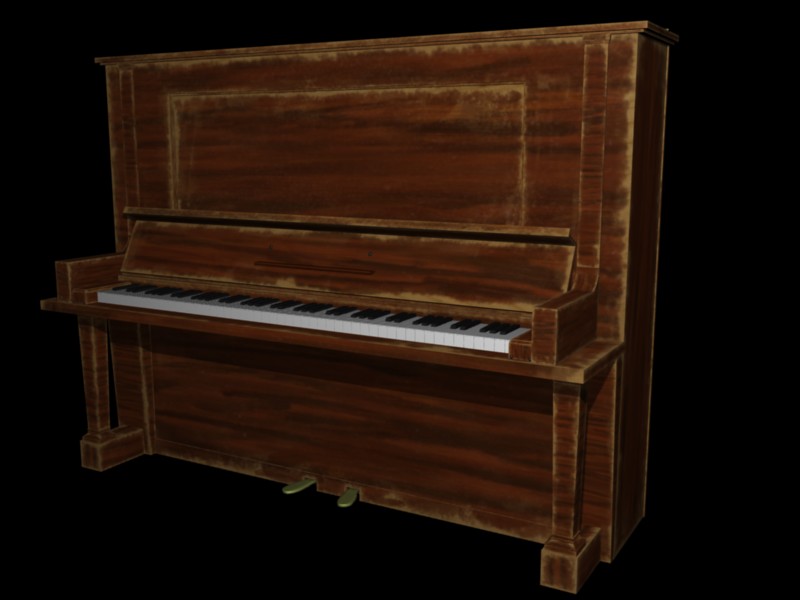 Leave the piano alone. Tell him to burn his guitar! :evilgrin:

Why not use 2.5’s super cool smoke/fire simulator?

This is going to look really good, it already does.

Go ahead and burn the piano, just don’t hurt any guitars as namekuseijin said…

Cool piano, but i think you went to far with the wear on it. ALL the edges have light brown color along them, it doesnt look realistic to me. Just tone it down a little. But then that probably would not matter since most of it would be on fire…

The only crit I have on the excellent texturing job is that it is too uniform. As if a crew of stage hands got together took it apart and went at it with the sand paper on all sides evenly. It is broken up but there is just too much of it all over and in parts that nothing would ever touch.

It would look more believable if the wear was on the edges most likely exposed.

So you’d get a better result by imagining what parts of the piano would get rubbed against by being moved, played etc. That would be outside exposed edges.

And the cleanest part would be the underside of the key cover - or whatever you call the thing I forget. There also the stain would be closer to the original color as well. So that would not have any wear on the inside edges but perhaps a few scratches and the stain color would be different.

And each edge would have a different kind of wear. One type of wear would be dents and chips, another type would be from rubbing.

And one more thing, what with all of the scratches and apparent hell or war or whatever this thing went trough, why are the keys perfectly white? Also why not some chips off of the edge of the ivory?

I can’t tell if you left out that detail but there is a small lip over the edge of the key on the outside.

That often gets chips:

You don’t have to chip the keys but it’d be likely given the condition of the rest of it. (may not even show in the final anyway) But at least dirty them up a bit.

If you went though and fixed these things you’d have a truly top notch work.

Thanks for all the C&C guys, I appreciate it.

@MikeH- I am currently using Blender 2.49b. I plan to make the switch at version 2.53 when it’s more stable and all of the old functionality has been restored. Also, Mental ray is much more powerful than the Blender internal renderer and it supports HDRI lighting and global illumination, which I’ll be using to composite the piano with the photo we take. I could never get Yafaray to work for me, always get console errors =
Don’t worry though, I share your love for Blender. Modeling is much faster

@DDD - I would have to agree with you. I’m thinking about going through all of the color maps again and touching them up , removing a lot of the wear on the edges and adding some more details, but I had the same thought. It’s going to be a big fireball anyway ^^. Thanks for the critique.

@Richard Culver - You’re spot-on about how uniform the edge-wear is. I’ll go back through and work on that. I put most of the wear on the edges for two reasons. 1) that is where it would recieve the most damage over the years 2) the edges are the first thing to burn. That’s why I added the wear to all edges instead of just the ones that would get damaged by use or by moving it. I agree that it is a bit much though. I am going to go back over the diffuse map again after I get the fire to where I want it and add in some charred places and burning embers.

The piano keys could use some dirtiness. I probably would have missed that. I’ll put some procedural textures on there to break up the pristine white. The keys do have a lip to them, but no chips.

At this point, I suppose I may as well make two versions of the piano. One to just have an old piano and the other version to set it on fire for the image. Originally I was planning on sculpting each piece, but I decided not to because all of that detail would just be covered up by the fire anyway. Now I’m reconsidering it. If I do, I will be sure to add some chips in to they keys

Good deal man. Please update us on the progress. Love to see it, especially the final Album (CD?) cover.

Alright, I fixed up the diffuse map, put on the bump and reflection maps and rendered with a random HRDI for lighting. I got a start on the fire as well, but it’s going to take a lot of tweaking. 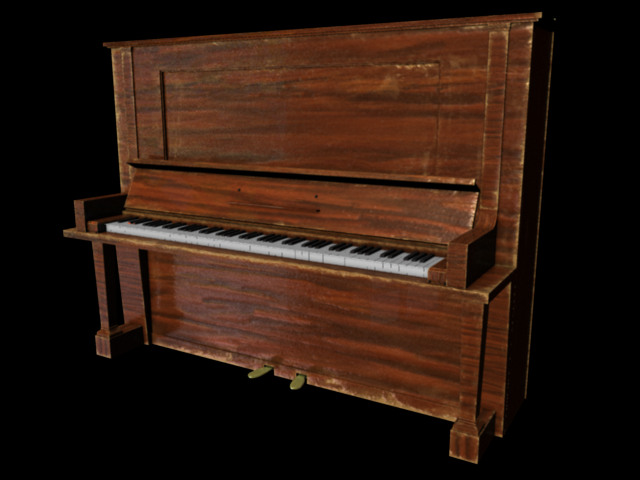 Ah there we go, thats better!

Alright, I’ve got the fire pretty close now. I’ll make the flame a little shorter/fatter, place it on the piano and add some smoke/haze to see what I’ve got so far. The biggest obsticle to completing this project now is getting the photo of a city street that he wants. Time to go urban exploring I guess 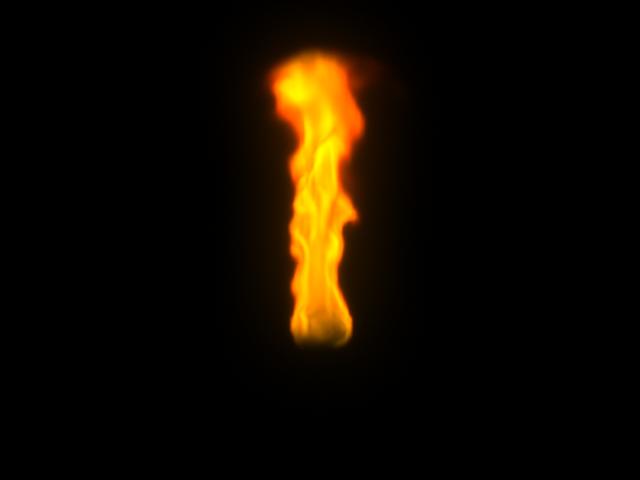 quick update on the fire.
Here’s a vimeo link of the animated fire. It’s slow-moving, but it’s for a still frame image anyway so I wont bother fixing that. 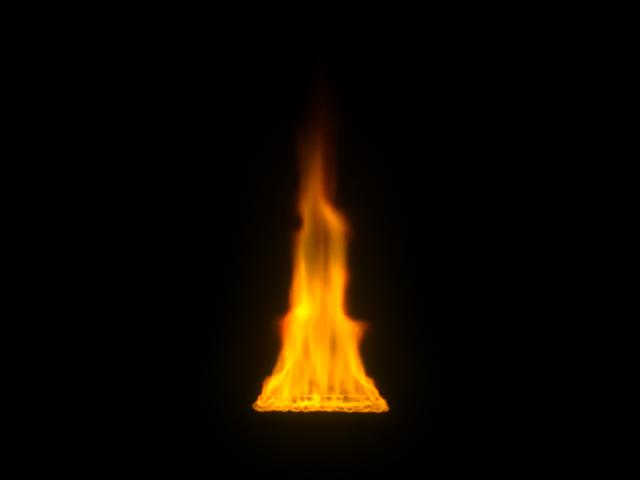 One more update for today. I imported and scaled the fluid into the piano scene. I will place some more flames on other parts of the piano and start doing some smoke tests. 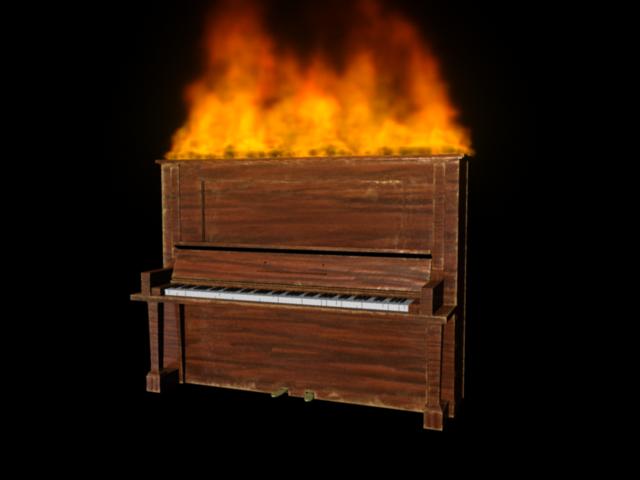 why don’t you just burn a real piano in front of a greenscreen?

Keith M - Well, fire and smoke has varying transparency at a high frequency all over it, especially the edges. That plus the varying haze generated by the heat would make the matte I pulled from it pretty terrible.
For a still frame I might be able to get decent results if I spend enough time in photoshop with it, but I think I can make a better composite using 3d, it will be easier, I get some good practice and I don’t have to deal with hauling a real piano, burning it and then disposing of it.

I think Keith was making a joke.

MikeH - Well actually, the guy who wants the album cover suggested chroma key as a possibility. I shot it down for the above mentioned reasons. Sorry I didn’t get the joke ^^;;
He does want to burn a piano anyway though. Just because it would be kind of cool to watch and piano’s are free anyway.