I thought I could try the BWC contest. The thing is I´ve never done something like this before. Thats my first contest. I´ve never made like a full scene project, I mean with good idea, sketches and so on. But here I am

I will try my best but I will need a LOT of help and feedback, so I count on you dear Comunity ;).
I am using blender about 1,5 year but there are so many things I dont´t know. And its not only about blender but 3d in general. So I could say I know how to model, texture, light, render (but still have some doubts about some of them), but I know almost nothing about rigging, shading, composing. And with this entry I will try make a project that would apply all of the elements of 3d creation. So I hopfully I after finishing it (hopfully) I will have some notion about the elements that are new for me now. Ok thats enough,lets talk about the story.
My scene is suppoused to show a small boy in the final step on his adventure of seeking the book of black magic created by very powerful necromancer that is dead now. He needs it to know the andtidotum to save humans from turning into walking and hungry of blood creatures (u can call them zombies). This backgrund story is still wip so I will try to develop it as my work progress.

The scene will show the boy from behind in front of giant cave looking like a monster head wich is tomb of the Necromancer itself and the place where he has to search for a magic book. I will try to keep it in a cartoon or game-like style.

Here you have some first sketches:

P.S.: Forgive me my English. 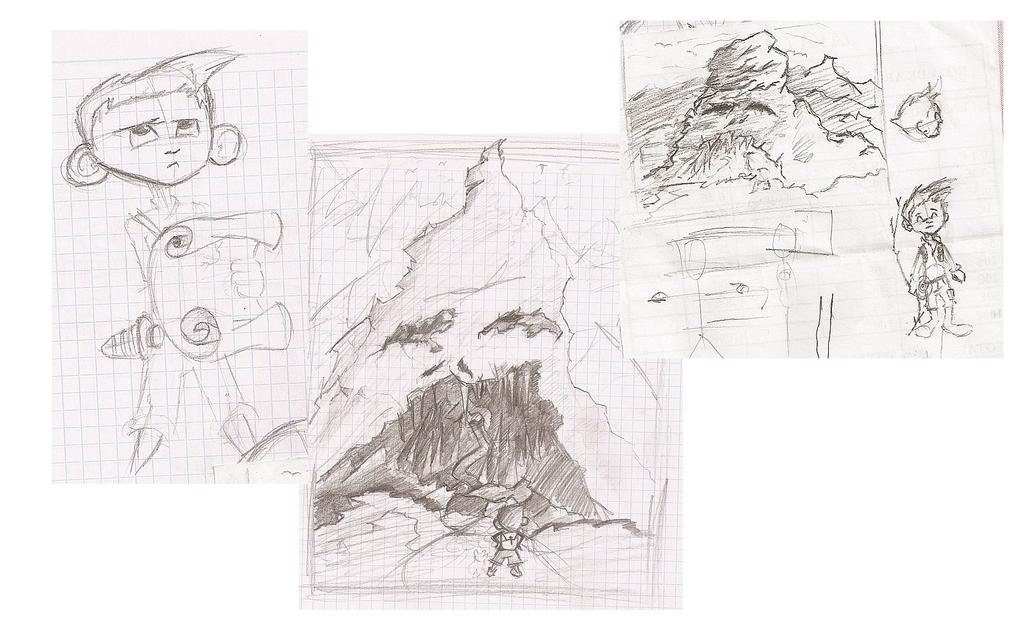 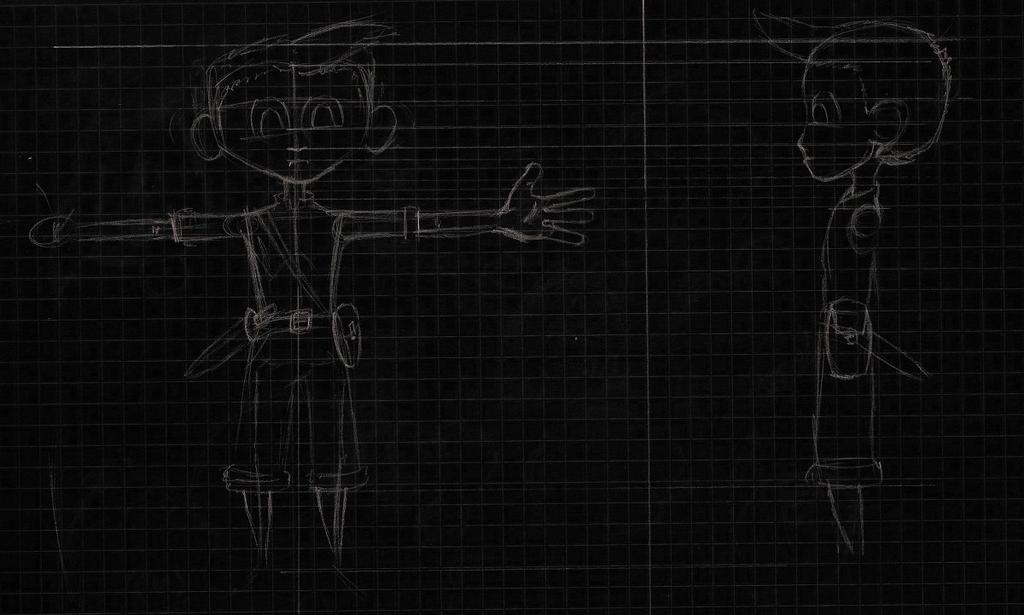 This looks very promising. I can’t wait to see some results! Good luck.

the basic idea is there, and the concept are is there. Go for it. it’s a nice story too.

Nice sketches… GO FOR IT!

I know i am stupid but what is bwc

I know i am stupid but what is bwc

Here you have some first 3d try. Its still a concept, but in 3d to try to locate the objects properly. What do you think about it? 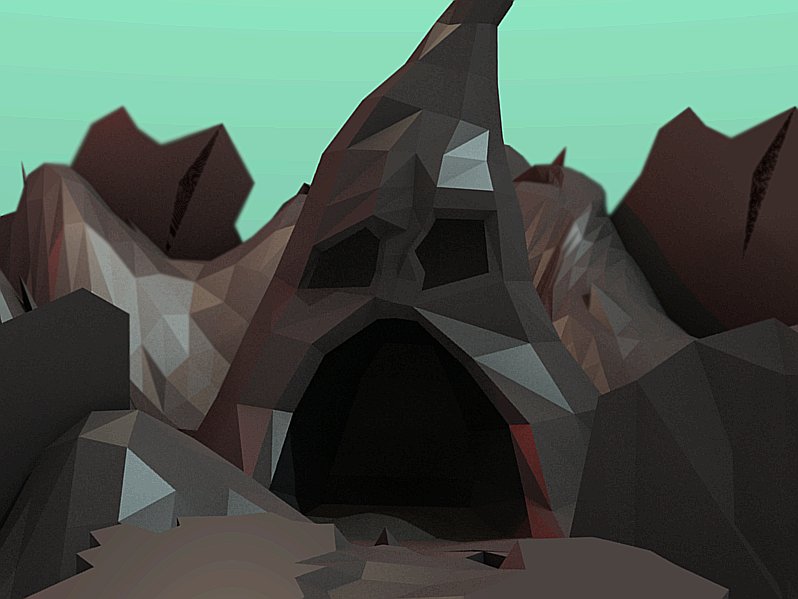 W key - ‘Set Smooth’ would certainly help, but for a general idea of placement it looks nice. For a more cinematic look I would bring the camera closer to the ground, looking up towards the looming cave (and possibly impending doom! :P)

I haven´t made it smooth because it was smoothing very ugly since some objects there has completely mixed up topology.

You can just use shift+s to sharpen edges that need it after smoothing.

First try of modeling (sculpting) on the Cave. Just a beginning but decided to post it before going to sleep to know what do you think about it, if I am going in the right direction. 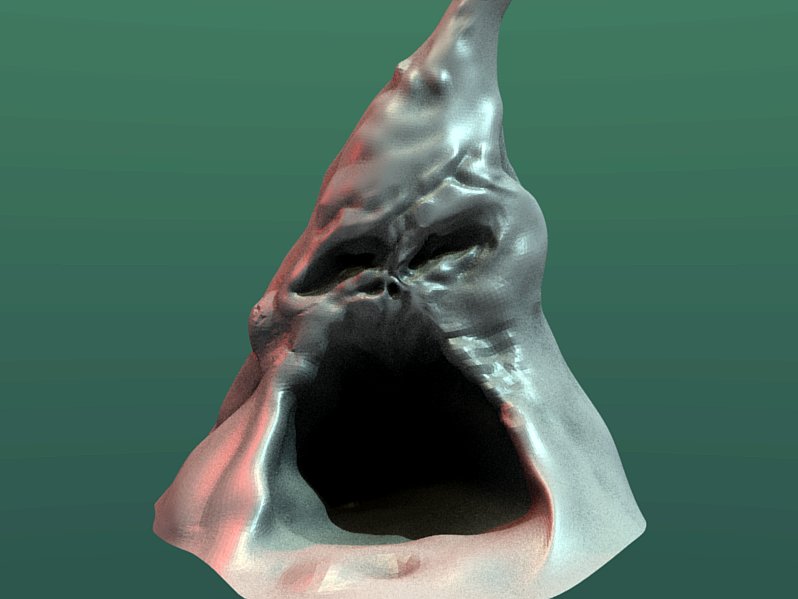 looks like mr. oogie boogie man (nightmare before x-mas), but with a nose.

Is it good or bad because I´ve never seen The night before christmas?

Take your cave a little of center to the left or righ and make it a little bigger. This also enables you to show your kid from a 3/4 perspective and we can actually see a little of his face. I also think making the camera look slightly up at the cave gives it a more menacing touch.
Great start.

Are you planning on doing a normal map from your sculpt? Or are you using the multires mesh directly? I think you need some sharper edges on the cave but besides that it is a great start.

Hey musk, thanks for advice, actually I was thinking already about it to show a little bit the face of the boy so Its very probable that I am gonna do what you said. Soon will make some tests.

Yes, I wanted to bake a normal map from it to be able to easy unwrap it and apply other maps (diffuse, bump). Its because for what I understand it would be difficult to unwrap so highpoly model? The thing is I would have to learn how to bake a normal map since I´ve never done it.

So does anyone could suggest me some tutorial about it or explain how to create it if its not complicated?
The sculpt is not done of course so it means that definitely its gonna get sharper edges.

Thanks you all for the comments, your suggestions and feedback are really helpful !!!

Is it good or bad because I´ve never seen The night before christmas?

This looks really promising. I like concepts very much. Good work. 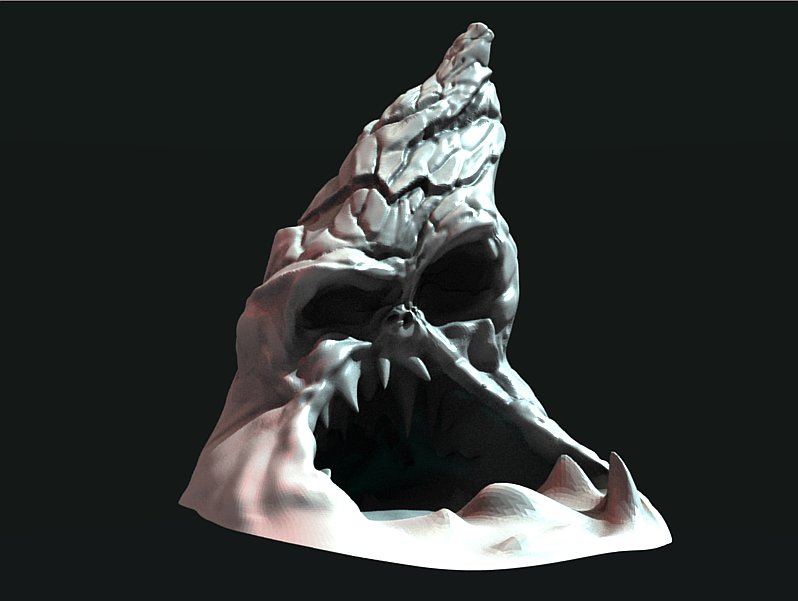