My entry for the 2008 Blender World Cup, with the theme “A Moment in Time.”

Render Time: 3 hours and 18 minutes on a 2.0 GHz dual-core processor.
Creation Time: approximately 60 hours over the course of a week and a half.
Number of playing cards in tower: 1,907.
Rendered with Blender Internal and composited with the GIMP.

Halfway through the creation of this, I discovered that French playing cards are actually quite different from Americans and British ones - so just pretend that Louis here is using an imported deck.

The French text on the books and the box is accurate, however, I believe - but I’ll leave you to figure out what it says for yourself. :yes: 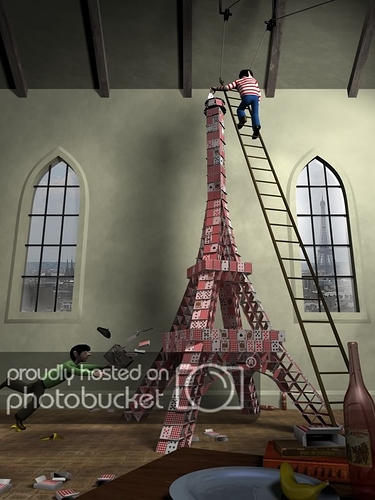 I love it. This is one of my favorites. Great job on what must have been some very hard work right here at the end of the competition.

This is a great image… great idea, great modeling, everyone is perfect except for ONE thing… and that one thing might bring the image down. The guy on the floor just looks so bad and out of place I think it really hurts your render. The one on the ladder is fine, but not him. Good luck!

But I have to say, it’s REALLY hard to ignore the glaring impossibilities in that card tower.

But I have to say, it’s REALLY hard to ignore the glaring impossibilities in that card tower.

Now here is the challenge to everybody else build the eiffel tower from cards so that it can stand realistically. :eyebrowlift:

Seriously though I love it. It captures the theme perfectly, Great Job!