iam doing a street scene where various things happen … i plan to involve about 5-10 people … the main charcter is carrying the camera through which the scene is rendered … he falls so the camera flys away and takes the picture of him falling.

this is going to be the face of the person falling :

the attached renderings are the face and the clothes of the person … both are far from beeing finished … i sculpted the mesh of the shirt, so that it fits the texture yesterday but dont want to re-render it … i will post more pics in the next few days

have a nice day 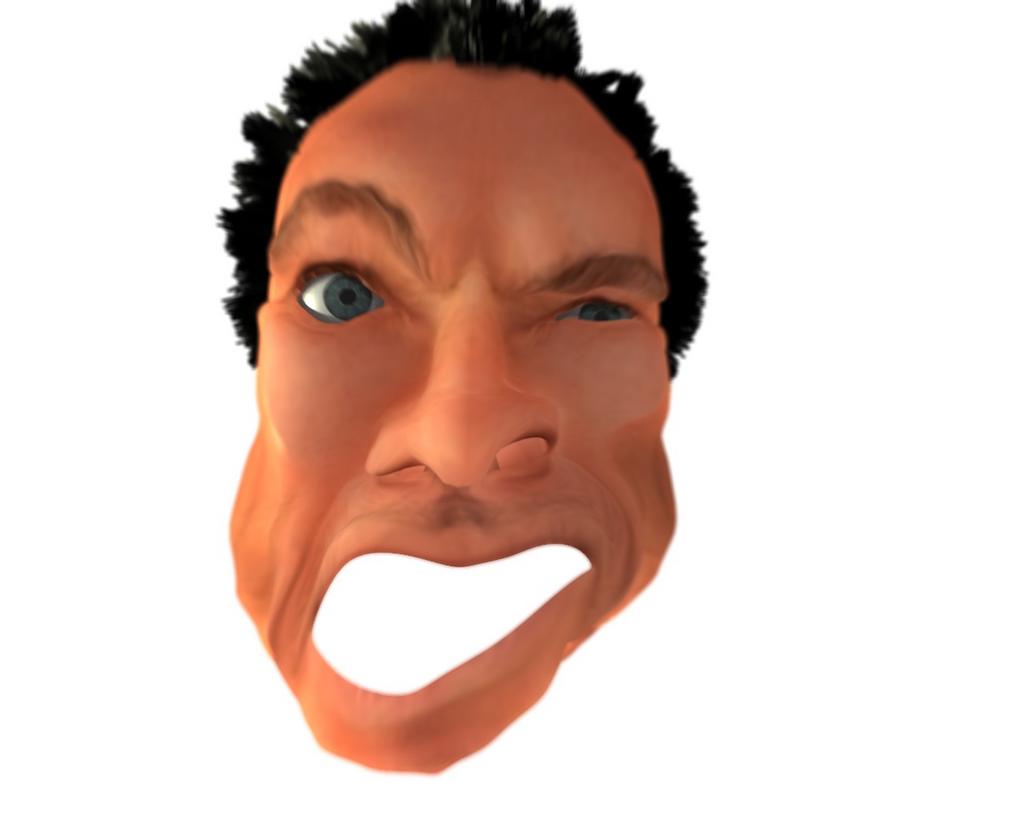 Great idea, and best of luck for the BWC! 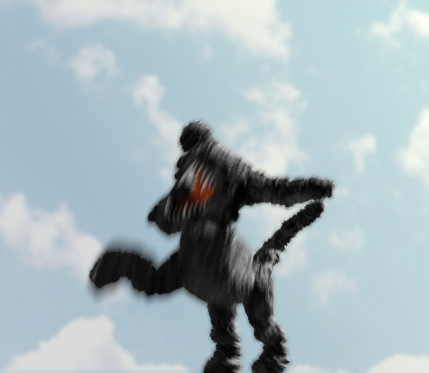 hmm… Doggie… Is that a very feirce poodle? Because that’s what it looks like!

its the small and aggressive dog of an old lady

i will ad a “first idea” render to show what it will look like … meanwhile i changed the format to panavision which is 1:2.33 i think, and the girl on the balkony is on the left now …

the women on the balcony looks down to on the street … the worker standing in the left part of the frame wants to attract her and pulls of his shirt … the old lady which is the next person to the right is seeing that, and turns to the left … by turning, her purse opens and a few 100€ bills fall out of it and sail to the ground … this attracts a person sitting on the far right side of the frame … he now tries to fish the bills with his walkingstick … that causes the person in the center to fall and loose his camera (which takes the render), and his softdrink … the softrink causes the little dog, from the old lady to jump and trying to fetch it … thats the story in the foreground so far

let me make one thing clear : iam no native speaker

so i hope you understood what i wrote hehe

i want to include a few things that cant really happen in realtime … for example the dog also could be the reason why the old lady looses the money, but this cant be because the dog starts to jump when he realizes that something is flying through the air, which cant be because the person cant fall before the money falls out

also i want to include a few things that only can be guessed or found when looking very closely or in full resolution … like actions or part of actions that can only be seen on the ground in form of shadow or in mirrors, for example if someone has sunglasses on, and when you look closely you can see that some action is mirrored in the sunglasses that takes part behind the actual render camera … something like this 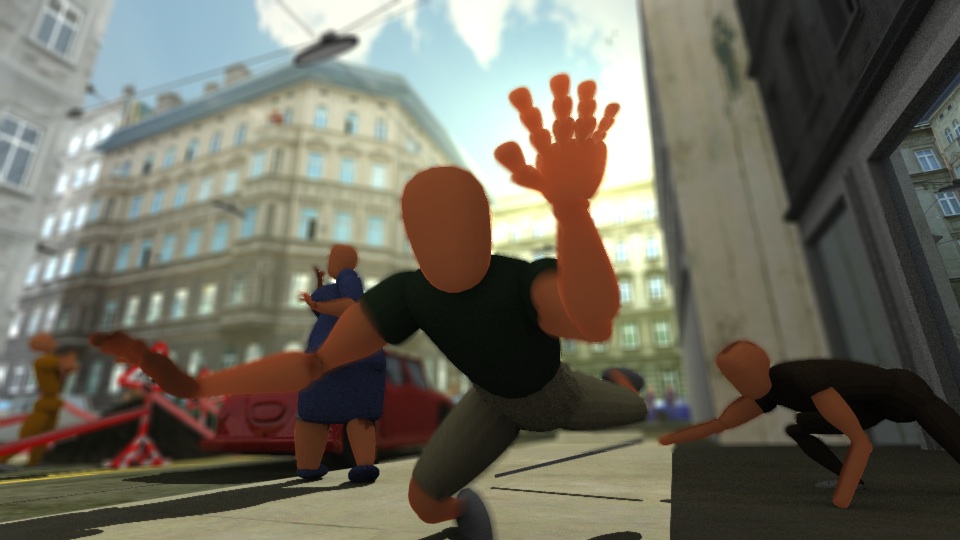 i will provide a little update … nothings finished yet … esp. the hair and most of the texturing … 4 days left 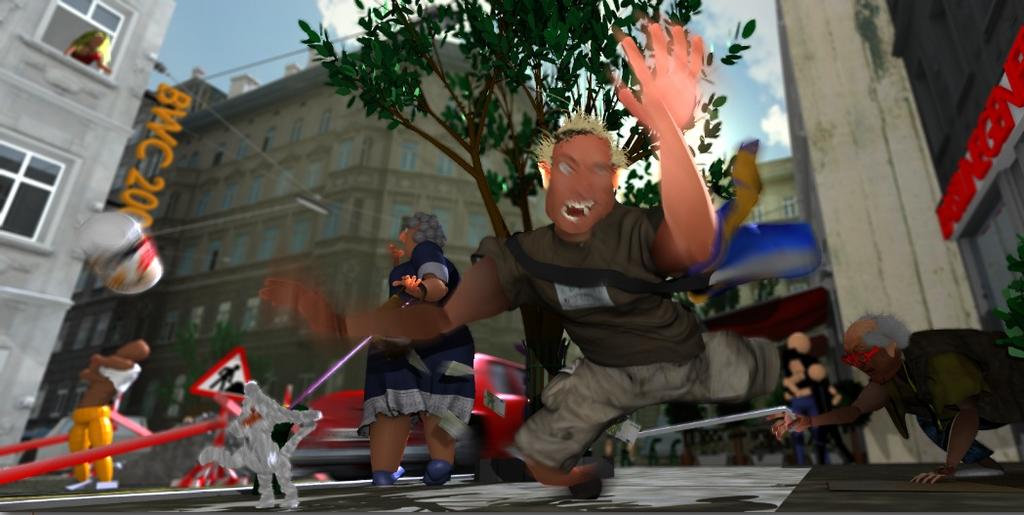 What resolution is your target resolution? Cause at the moment the resolution isn’t high enough to actually make out the money nor to see that the guy is fishing for the bill with the walking stick. It looks more like the grandpa is trying to trip the guy falling and the puddle is just barking his head off at something or someone.
I only realized that the old lady is dropping money after I read your description of the scene and to me the worker and the woman are totally lost in the busy background.
If you want to tell that story you will have to make certain that the parts important to the story stick out more. I also think that the idea with the camera is great but you need something depicting that the image is taken by the falling camera.
A suggestion from me let the guy who is falling have sunglasses which are falling and the camera is reflecting in one of the glasses.
Nice concept but hard to pull it off on such a short notice.

the camera will get a “shooting frame” … dont know how to call it … but what you normaly see, looking thru a camera … like “rec” or aperture and shutterspeed … the sunglasses with the reflecting camera are a fixum …

… the only problem i see is : 4 days left and 30°C outside … and those are the last summerdays … i dont really know if blender wins against the sun hehe

edit:
i just saw the poodle i posted before is in 1:1 resolution … and between the women, looking out of the window, and the worker theres a silver motionblurred cylinder … that will be a can of a softdrink … with water/softdrink coming out of it spraying the area between the “BWC and the tree in the front” … that will be the reason why the poodle is flipping out … i could make a nuke mushroom mirroring in one of the windows to show : in a few moment they all gonna die

thanks … the weather is getting bader today … it just started to rain in vienna … bingo !

Well, make sure you submit at least your best rough draft.

i got it to work again … i guess i messed it up with particles or so … i now render in single layers, and it seems to work … i made a test for compositing with an older rendering … the style is copied from a nikon fe-2 … the split image which sits in the middle of the inner circel will be made in postpro.